Wow, was there so much to see. As a transfer student who is currently in his first year attending in- person on campus, the thought of having a homecoming took me completely by surprise. What made Homecoming 2021 a surprise was the abundance of events packed into just a couple of days. From the Black Student Union poetry jam to the football and hockey games to kickstart the weekend, Homecoming week was a thrilling experience all throughout. Here’s what I covered!

Upon entrance the Homecoming block party seemed like a showcase event akin to the parade, but when you turned the corner past the beautifully adorned golf carts (side note: I really wish I could ride around campus in those) — it opened up to rows of white tents dotting the lawn. Within these tents were various student and staff-led programs hailing from different departments across campus. Beyond the information each booth provided was a host of games and activities scattered throughout the lawn, ranging from a money booth and wheel of fortune for a chance to win prizes to a more casual game of cornhole, and a separate tent where alumni and students alike could socialize. Oh, and there was popcorn too. 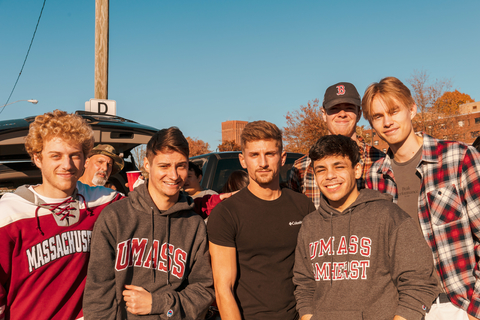 Going to the homecoming football game and meeting up with fellow UMass students and alumni felt like exactly what we’ve all been missing for the past year in lockdown. The vibes were simply immaculate at the tailgate. A bright and sunny Saturday afternoon was the perfect setting to roll out the portable grills and coolers, and fill the air with the smell of home-cooked food and BBQ chicken wings. Students showed their UMass pride as they came in droves, accompanied by alumni seeking to make a reappearance on campus.

As I was taking photos of the event, I was welcomed by this massive group of family and friends who offered me some food and good conversation. It was at that point I was greeted by one of the mothers of the students, and struck up a wonderful conversation about my time at the university and my plans for the future as well as some much-needed academic and life advice. I may have forgotten her name in hindsight, but her wisdom was greatly appreciated — just as much as the chicken wings.

The football game. Ever since I immigrated to the United States, I’ve never witnessed a larger spectacle than a college or high school football game. The Minutemen Marching Band showed us what they’ve been preparing for over the semester, and the UMass Minutemen football team started to show signs of rallying, and ran a close game against Rhode Island. Although the football program isn’t having the greatest season this year, several alumni players attended the match and showed their support for the colors they will forever represent. Overall, that’s what homecoming is about, the old and new coming together to celebrate the place we all call home; our beautiful campus at UMass Amherst. What a day.