WHAT IS UMASS FLEX? 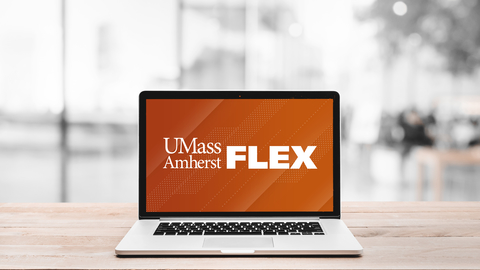 The UMass Flex initiative expands the University of Massachusetts Amherst’s world-class academics and rich co-curricular experience beyond the borders of campus. It offers instructors and students alike greater flexibility in when, where, and how they teach and learn by presenting courses across two or more learning modes (in person, live online, and asynchronous online). UMass Flex also opens doors to make other aspects of the UMass experience–from student groups to academic advising to career guidance–more adaptable to the needs of today’s students.

UMass Flex grew out of a strategic expansion of University Without Walls announced by Chancellor Kumble R. Subbaswamy in 2018, well before the COVID-19 pandemic prompted higher ed to pivot almost overnight to virtual instruction. The following year, the Instructional Design, Engagement, and Support (IDEAS) group partnered with the Center for Teaching & Learning (CTL) to support an early cohort of faculty in exploring flexible learning; this faculty-centered approach would later be embodied in the FlexLearning Fellows Program.

The Chancellor formally laid out a vision for a flexible university in his January 2021 white paper, and convened the Task Force on Flexible Learning in February 2021 to carry out that vision. Thus began UMass Flex—a new initiative building on nearly 50 years of innovation in distance teaching and learning at UMass Amherst, and more than 150 as a residential campus with students and faculty being primarily engaged in in-person teaching and learning on the Amherst campus.

For a more in-depth look at UMass’s history in online learning, visit our history page >

As befits our university’s history of invention and innovation, we intend to embrace this upcoming revolution and become leaders.

UMass Amherst’s flexible learning initiatives date back nearly half a century. In 1974, the Video Instructional Program (VIP) was established in the School of Engineering, allowing students around the world to experience UMass engineering classes. In the 1980s, the VIP program began beaming live classes via satellite (and later via the Internet) to off-campus students.

Since then, UMass Amherst has continued to lead the way in flexible learning, adopting tools and technologies to enable remote access to education such as PLATO—one of the earliest programs in computer-aided instruction—in the 1980s, and OWL—an early online web-based learning tool—in the 1990s. These tools were early forerunners of learning management systems like Moodle and Blackboard, widely used today at UMass and other educational institutions to support learning outside the classroom.

A LEADER IN ONLINE PROGRAMS

In 2001, the Isenberg School of Management began offering an entirely online, AACSB-accredited MBA degree program. In 2007, the School of Public Health & Health Sciences launched the first fully online master of public health (MPH) in nutrition degree program in the nation. The 2010s would see more widespread adoption and use of distance learning technologies, as well as increased online academic program offerings. University Without Walls, which introduced its first undergraduate degree completion program in 1971, has grown into a leader in online education.

Today, many of UMass’s online degree programs—including the MBA, MS in nursing, MS in nursing education, and MEd in science education—are top ranked nationally and internationally by publications such as U.S. News & World Report and Financial Times.