Collection of essays from Cornell University Press critically analyzes the right-wing attack on workers and unions, and offers strategies to build a working-class movement 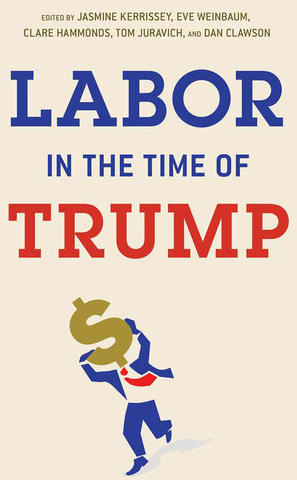 AMHERST, Mass. – Five members of the faculty of the UMass Amherst Labor Center have collaborated in editing “Labor in the Time of Trump,” a new book published this week by Cornell University Press that critically analyzes the right-wing attack on workers and unions and offers strategies to build a working-class movement.

While President Trump’s election in 2016 may have been a wakeup call for labor and the political left, the editors say that the underlying processes behind this shift to the right have been building for at least forty years. They argue that only by analyzing the vulnerabilities in the right-wing strategy can the labor movement develop an effective response.

“Labor in the Time of Trump is a must-read,” says Sara Nelson, international president of the Association of Flight Attendants-CWA, AFL-CIO. “It makes clear that labor’s role is crucial in a time when workers and our institutions are under attack. Analyzing the current anti-worker, anti-union environment and how the Right brought us to this point, the book pivots to the opportunities we have for making a new, more progressive world. A better world is possible.”

The editors all regularly work with unions and worker centers, and they teach graduate courses in labor studies, economics, history, organizing and union campaigns.

The UMass Amherst Labor Center was founded in 1964 as the Labor Relations and Research Center after AFL-CIO President George Meany visited the Amherst campus to give a commencement address and encouraged the university to start a labor studies program similar to those that existed at many other land-grant institutions. A multi-disciplinary program drawing on the strengths of faculty in many departments across campus, this new program was unique given its focus on labor and workers’ rights, distinguishing it from joint labor-management programs.

In 1996, the Union Leadership and Activism (ULA) program was created for union leaders, staff and activists. The only limited-residency graduate program of its kind, it has been a highly successful part of the UMass Labor Center for more than 20 years. In 2010 the Labor Center joined the university’s sociology department to leverage the department’s strong focus on work and labor issues, as well as gender, race and immigration.

More information, and the ability to order the new book, can be found on the Cornell University Press website.