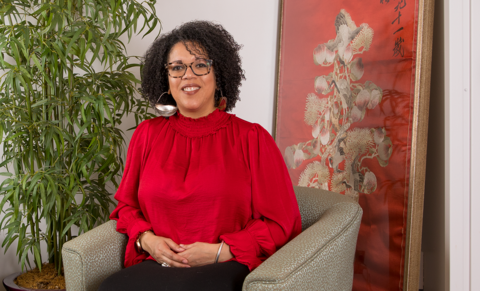 As a PhD student at the University of Texas, Whitney Battle-Baptiste walked into her advisor’s office one day brandishing a hefty folder of anthropological research on captive Africans. Her advisor’s reaction? “How is this going to help the liberation of Black people?”

“That question really threw me,” says Battle-Batiste, a professor in the UMass Amherst Department of Anthropology and director of the university library’s W.E.B. Du Bois Center. It also helped spark her interest in engaged scholarship that speaks to real-world issues. “If there’s a disconnect between the work I do and the community I partner with, it’s just work for work’s sake,” she says. “It doesn’t push us to think or act differently.”

Battle-Baptiste’s early academic training as a historian took a turn when she was selected to be an archeology apprentice at a plantation site in Williamsburg, Virginia. “I fell for archeology as soon as I got the internship,” she says. “This was tangible evidence of the history of my past.” Her first book, Black Feminist Archaeology, sprang from experiences such as this. “The work I was doing was directly related to the Black community in the Williamsburg area,” she says. “It was community based. It was about people.”

Responding to the needs of her community has been a hallmark of Battle-Baptiste’s work as an activist in the field, in the lecture hall, and in the classroom. As a historical archeologist focusing on the African Diaspora through the lens of race, gender, and class, she discovers ways to use archeological interpretation as a tool for social and political change. “More archeologists need to be in conversation around museums, around confederate monuments,” she says. “Scholarship and activism don’t have to be separated.”

In that regard, and in many others, Battle-Baptiste follows in the footsteps of W.E.B. Du Bois, a Massachusetts native whose vast collection of work—as scholar, author, civil rights activist, co-founder of the NAACP, and cultural and political icon—is housed in the campus library that bears his name, just upstairs from the W.E.B. DuBois Center, which serves as the collection’s programmatic arm. Thanks to Du Bois’ wife, who made sure his collection went to a public university, UMass is now home to, in Battle-Baptiste’s words, “an amazing archive that is dedicated to spreading the word about social movement and change.” The university also serves as steward of the W.E.B. Du Bois boyhood homesite in Great Barrington.

Although Du Bois was born in the 19th century and died just a day before the March on Washington in 1963, his progressive ideas on equality and justice make him, says Battle-Baptiste, “not just ahead of his time, but a scholar for all time.” That seems clear based on the number of students, academics, and community members flocking to the special collection. “It was packed almost every day this summer,” she reports.

But it’s the programs of the Du Bois Center that bring those important archival materials to life. Under Battle-Baptiste’s direction, the interdisciplinary center is expanding its reach into the community and beyond to bring scholars of all ages to campus. Currently, a three-year Andrew W. Mellon Foundation grant is funding fellowships for graduate students and faculty with interests related to Du Bois, as well as providing educational opportunities for local community college students who hope to expand their two-year degree into a four-year bachelor’s from UMass Amherst.

“Our goal is to become a beacon for scholars, community members, and curious young people, to explain, ‘Why is race so important?’” says Battle-Baptiste. “The issues Du Bois spoke about—environmental justice, equal pay, universal health care, equitable distribution of wealth—are just as relevant today. We want to bring Du Bois to a new generation so they can see the cyclical nature of the world we live in.”

That generation is paying more attention than ever, according to Battle-Baptiste. “In a time of social media and sound bites, young people are looking for alternative ways to understand the world.” One way the center answers that need is by offering free copies of Du Bois’ seminal work, Souls of Black Folks. “We want to make sure no student passes through here not knowing who Du Bois is,” says Battle-Baptiste. Word is clearly spreading. “One student said, ‘I have a copy, but can I have another?’” she recalls. “‘I really want my roommate to read this.’”

To help ensure that Du Bois’ words live on, Battle-Baptiste will be on the floor of the State House in late February to present a special UMass Press edition of Souls of Black Folks honoring the 150th anniversary of Du Bois’ birth. That this and other birthday events, both on and off campus, fall during Black History Month makes the celebration all the more fitting. “Black History Month should help us understand how the contributions of people of African American descent should be woven into the fabric of this country,” says Battle-Baptiste. “It should help us understand our relationship to each other.”

“We’re in a moment now where we have the opportunity to talk to a whole generation about building a society in which we’re able to see each other and not be distanced by the concept of separation,” she adds. “Du Bois talks about the value of every person. He believed in humanity, not just black humanity.”

In the end, she says, it’s about empathy. “I listen to people—as a racialized woman in this country, I’ve had to learn how. I can engage with just about anyone and walk away knowing that I made that person think a little differently, and also walk away knowing something I didn’t. So when my students get angry about the world today, that’s what I say to them: ‘Listen.’”