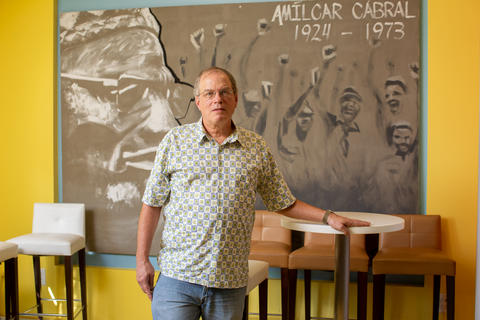 James Smethurst is a scholar of 20th-century African American literature, culture and intellectual history and professor in the UMass Amherst W.E.B. Du Bois Department of Afro-American Studies. His research and scholarship explore connections between these subjects, and how politics, social relations, and art influence each other.

Among his research topics is the Black Arts Movement of the 1960s and 1970s, a subject that Smethurst feels has yet to be fully explored.  He says, “There is this notion that the Black Arts Movement was short-lived and not very influential. In some ways, I think it was the most successful, most grass roots, and most consequential arts movement in the history of the United States.”

Smethurst is the author of five books on African American culture and history, and co-editor of three collections, including SOS: Calling All People, A Black Arts Movement Reader. This collection, a collaboration with renowned poet and Black Arts Movement architect Sonia Sanchez and Afro-American Studies colleague John Bracey, was published in 2014 by the University of Massachusetts Press and is a much-needed resource for faculty who want to teach the subject. It includes works of fiction, poetry, and drama in addition to critical writings on issues of politics, aesthetics, and gender. One of Smethurst’s earlier books, The Black Arts Movement: Literary Nationalism in the 1960s and 1970s was selected as an "Outstanding Academic Title" by Choice magazine and won the James A. Rawley Prize from the Organization of American Historians. The Rawley Prize is awarded annually to a book dealing with the history of race relations in the United States.

Black Lives Matter: What it Means to be Human

When asked about the influences of the Black Arts Movement on the Black Lives Matter movement of today, Smethurst believes there are fundamental connections.

“As Sonia Sanchez said, Black arts was about answering the question of what it means to be human and also insisting that Black lives matter. It’s what Malcom X called the idea of human rights as opposed to civil rights. If Black lives don’t matter, if there is a category of people who aren’t quite human, which is a yardstick that has been around this country for a long time, then as Ice-T says, 'no lives matter’.”

Smethurst notes in particular the debate in the presidential election about what’s happening in cities in the US at this moment in response to incidents between (primarily) black men and the police.

“Virtually all the uprisings, sometimes called ‘riots,’ of the 1960s before Dr. King’s assassination in 1968, in Newark, Detroit, Watts, Harlem, they were almost always sparked by conflicts between the community and the police. Some incident would set it off, an angry crowd would gather and it mushroomed out from there,” says Smethurst.

He notes that what was true back then continues to play out across our country today. “Just like now when people say “I can’t breathe” or “Black Lives Matter” they are talking about George Floyd and Breanna Taylor and the whole long, horrible litany of people who have been killed or damaged and continue to be. But it is and was also about a lack of decent housing, of access to decent jobs, inferior education for Black people, of access to political representation. There are still voting rights battles being fought in this country,” says Smethurst.

Art for the People

Along with reflecting the thoughts, feelings and emotions of political activism of the time, Smethurst says the Black Arts Movement spawned the notion of public-supported art, which led to funding of the arts through organizations such as the National Endowment for the Arts and the National Endowment for the Humanities. It was the beginning of this notion, says Smethurst, that art should be easily and affordably available to every-day people, and “not just be in the Museum of Fine Arts in Boston. It should be in communities, in Mason Square in Springfield, or in Roxbury or the central ward of Newark.”

“It’s the idea of art for the people,” says Smethurst. “It really influenced everybody’s notion about how we understand art, who it’s for, how it’s presented, where you get it. We have people seeing murals in their communities and arts programs in their communities. The notion that such support for the arts should exist and art should be brought to the people in that way really goes back to the Black Arts Movement in a way that hadn’t been seen since the Great Depression.”

Smethurst says the idea that popular art could be serious and serious art could be popular came out of the movement as well. “These artists were trying to change the world. They were trying to, on one hand, create art that was revolutionary and avant-garde, but they didn’t want to reach just a few-hundred hipsters, they wanted to reach tens of millions of black people and move them,” says Smethurst.

“Nobody, I think, can be very happy with the political chaos and social chaos going on in the country now, COVID aside,” says Smethurst. “One thing that has happened in these times largely through Black Lives Matter, is that we are asking ourselves in profound ways, what is American History? What have we been? Who are we now? Where are we going?”

When asked about the role he sees the W.E.B. Du Bois Department playing in all of this, Smethurst says, “I am as optimistic as one can get at this time about the future of our department. We are speaking right to the center of the concerns of the United States and the question of what it means to be human. What was called Black Liberation in the 1960s, is at the heart of our politics at this moment. What does freedom mean? What does it mean to be a citizen? Who can be an American? If you are denied the ability to be an American, a true citizen, what are people to do? This country has now, as it always has, some hard choices and some hard decisions. Hopefully we can play a part in moving people in a way that allows us to be most free, most human.”