The Kinney Center for Interdisciplinary Renaissance Studies will showcase “Mapping Terroir: Memory & Myth,” an exhibit by artist Andrea Caluori exploring connections across the center’s rare book collection of early modern agricultural and husbandry manuals and contemporary cultures of farming today. The exhibit, which will run from June 18 through September 30, will explore how myth and historical memory shape relationships between humans, animals and plants, and thereby fosters ideas of earthly terroir, the environmental factors that affect a crop’s phenotype.

“Mapping Terroir” is the inaugural exhibit of the center’s new Artist in Residence program, which invites local artists to explore the ways in which their work intersects with Renaissance thought and craft to produce creations that generate new perspectives on the relationship between the early modern world and our own.

Eight original prints created from hand-carved linoleum blocks, accompanied by six books published between 1600-1750, form the centerpiece of the exhibit. Influenced by her experience as both a farmer and printmaker, Caluori describes her work as “an attempt to capture a feeling that exists somewhere between memory and myth,” and to “create a sense of place that goes beyond the borders of terroir in mapping…the personal moments that define taste, past and present.” 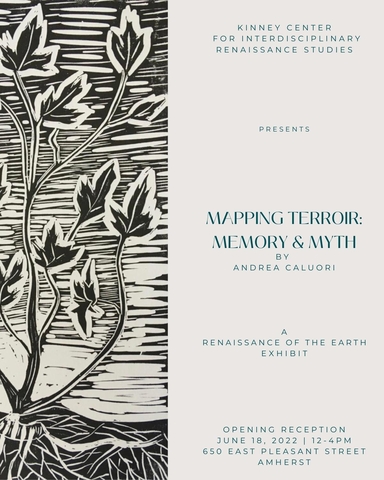 The prints, along with the Renaissance rare books that inspired them, are on display in the Center’s reading room, which also features views of the surrounding gardens, meadow and mountains.

The Renaissance of the Earth is a series of interdisciplinary research collaborations, undergraduate and graduate courses, hands-on workshops, conferences and arts programming that consider how the early modern past helps us reshape our environmental future. “Andrea’s exhibit is an exciting catalyst for programming at the Center this summer, ranging from workshops and masterclasses to a visit from the sheep with Sustainable Ewe Mass in August,” says Marjorie Rubright, director of the Kinney Center.

The opening reception for “Mapping Terroir: Memory & Myth” on Saturday, June 18, from noon-4 p.m, is free and open to the public. All are welcome to view the exhibit and explore the Center’s kitchen garden, apple orchard and meadows. Free parking is available at 650 E. Pleasant St., Amherst.

More information about the Kinney Center and the “Mapping Terroir” exhibit can be found at www.umass.edu/renaissance.