Students at the University of Massachusetts Amherst earned a gold star for their voting participation in the ALL IN Campus Democracy Challenge. More than 840 institutions participated in the challenge sponsored by ALL IN, a national nonpartisan initiative of Civic Nation. 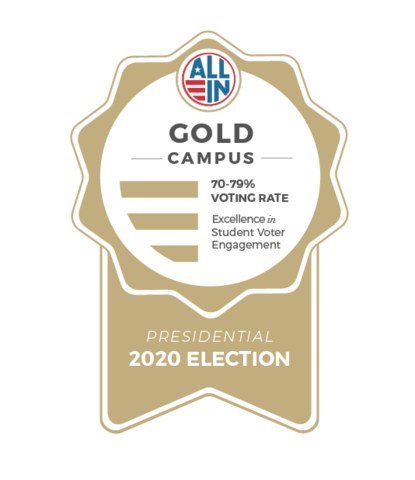 Each institution was ranked based on the percentage of students who voted in the 2020 presidential election, which engaged the largest and most diverse group of college students in U.S. History. UMass Amherst finished with a Gold ranking for having between 70-79% of students participate in the election.

The 2020 election cycle saw unprecedented voter registration and turnout among college students according to the National Study of Learning, Voting and Engagement, a research study by the Institute for Democracy in Higher Education at the Jonathan M. Tisch College of Civic Life at Tufts University. According to that study, UMass Amherst students had a 74.7% voting participation rate, compared to 54.4% in the 2016 presidential election.

At UMass several student groups are credited with organizing voter registration drives and participating in “get out the vote” drives to encourage their fellow students to vote.

“The rise in voter participation and engagement for college students in last year’s presidential election amidst a global pandemic was tremendous and will undoubtedly be tied to the tireless efforts of dedicated students, faculty, administrators, and partner organizations that are part of the ALL IN Challenge network,” said Jen Domagal-Goldman, executive director of the ALL IN Campus Democracy Challenge. “The hard work of these trailblazing honorees will help support many of the country’s future leaders in fulfilling the equitable, engaged vision of democracy to which we aspire.”