Poll finds over half of Americans believe white people in the U.S. have advantages based on skin color, 75% believe public schools should teach about racial inequality 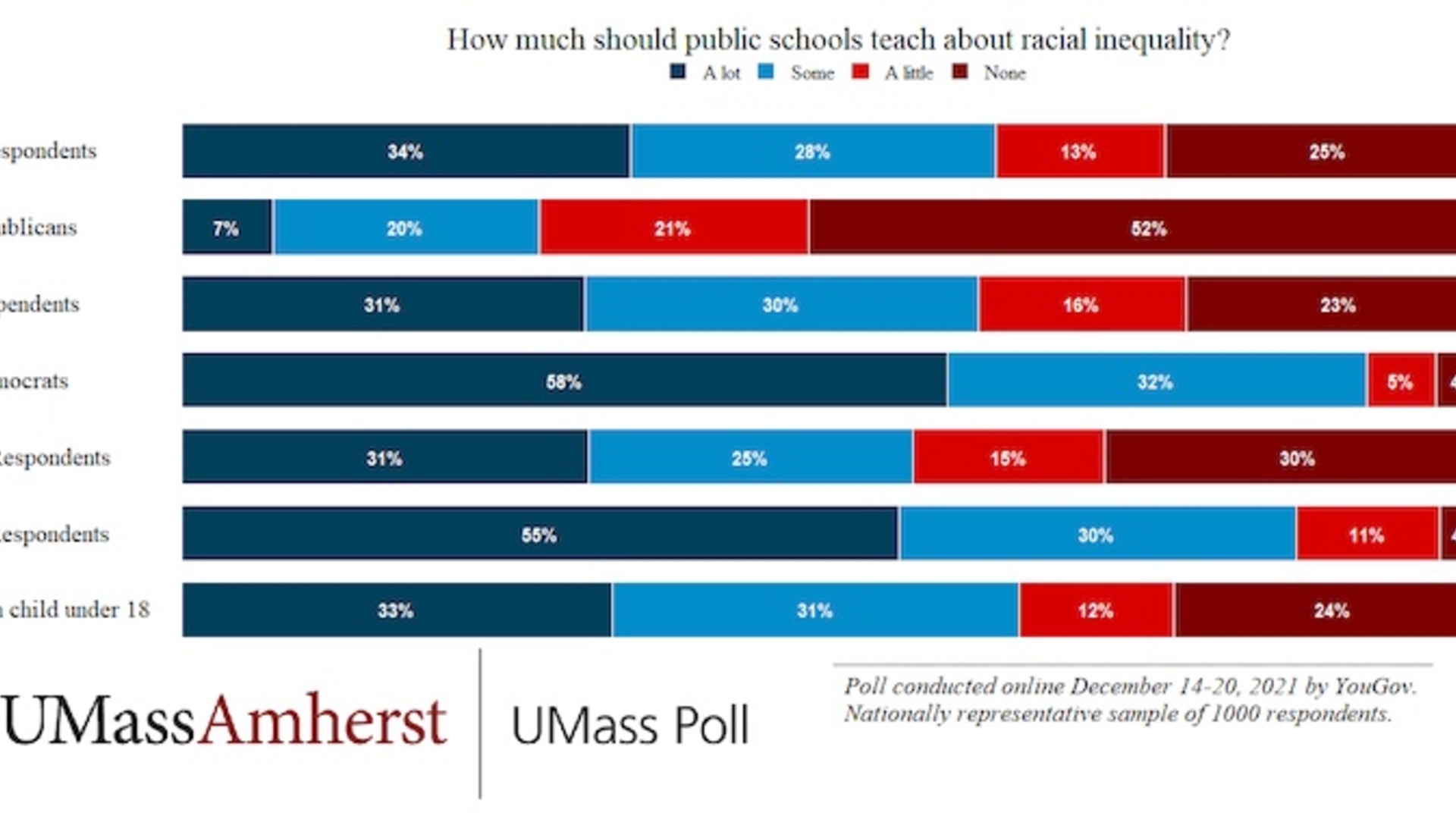 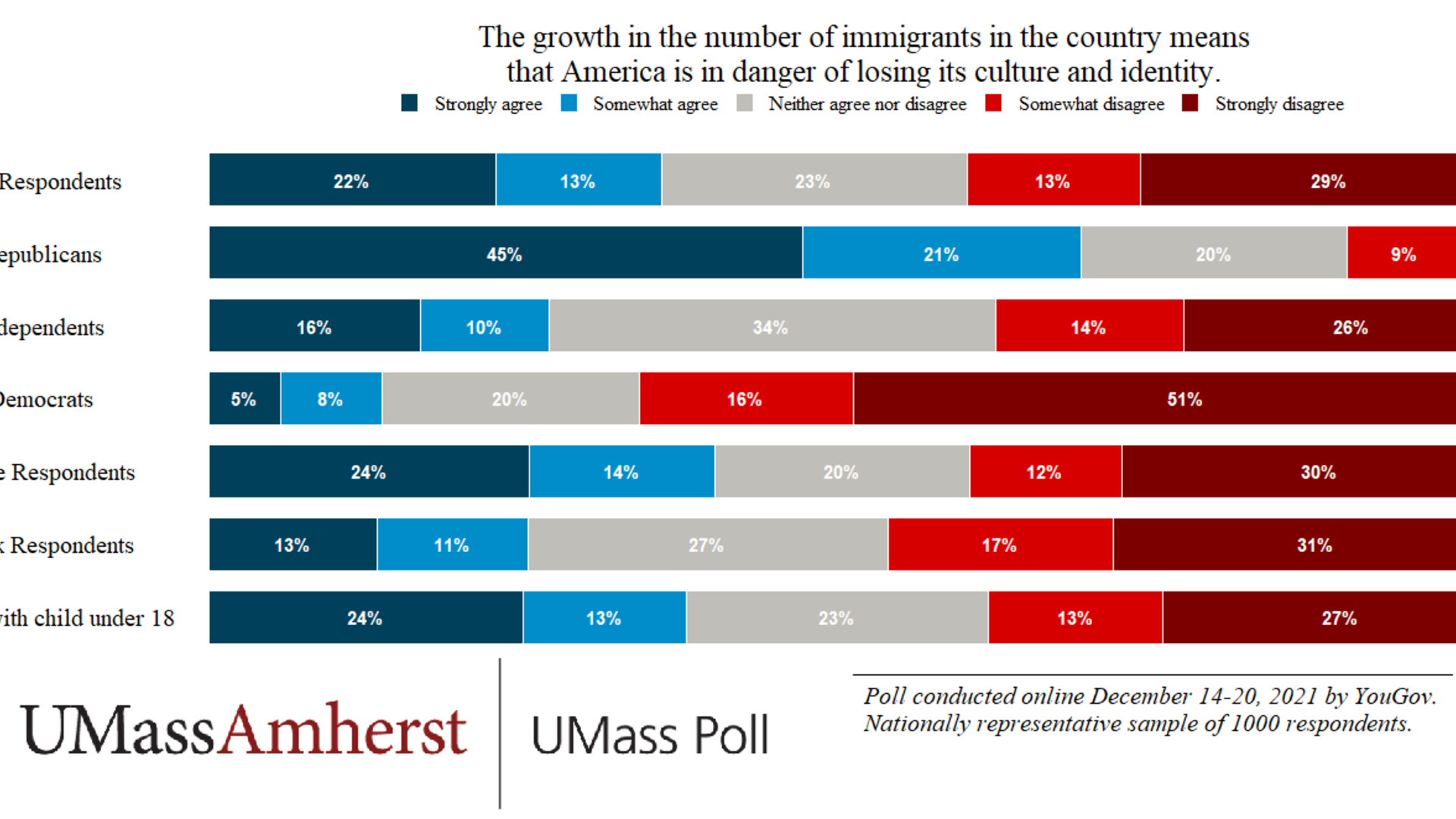 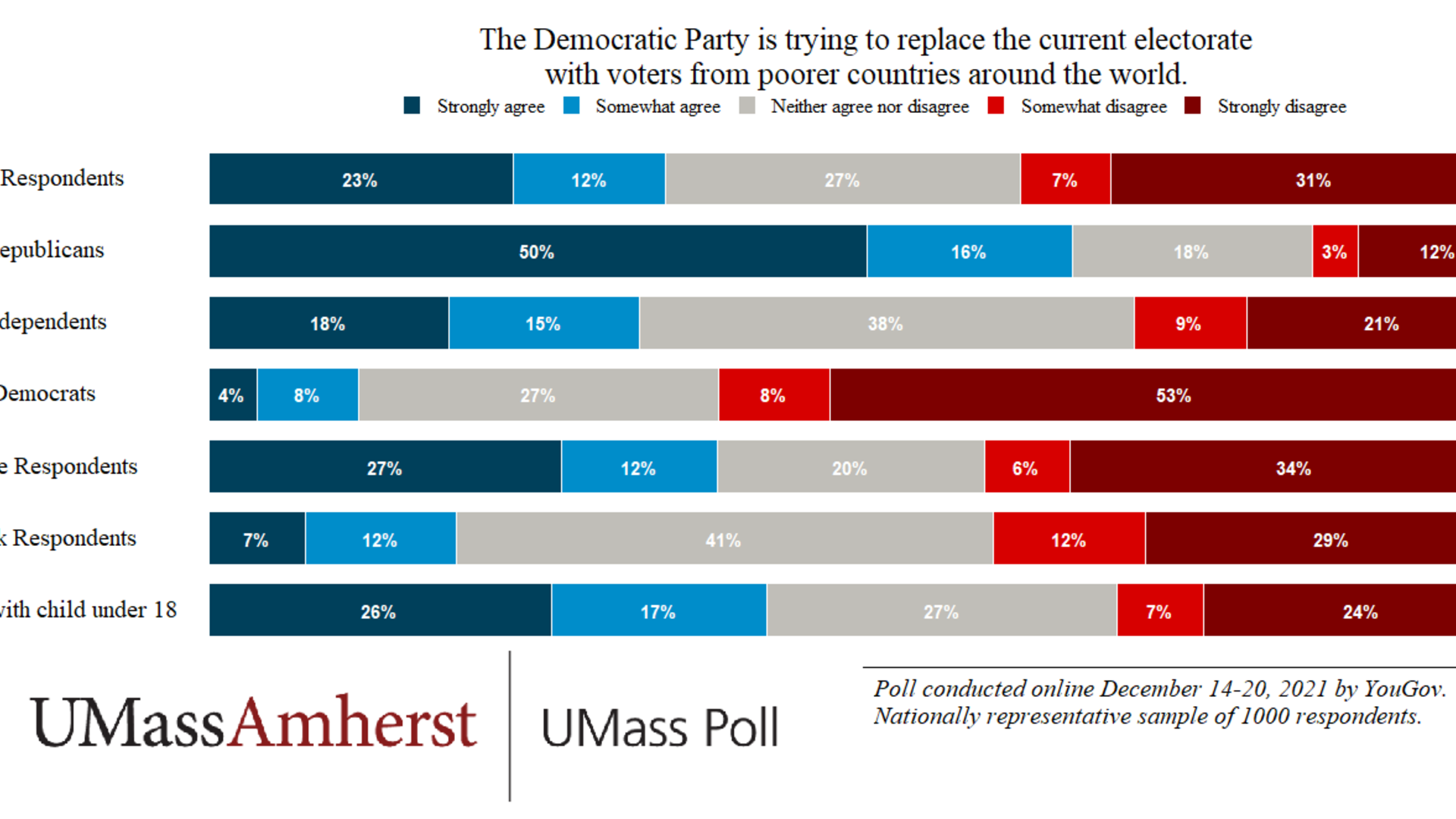 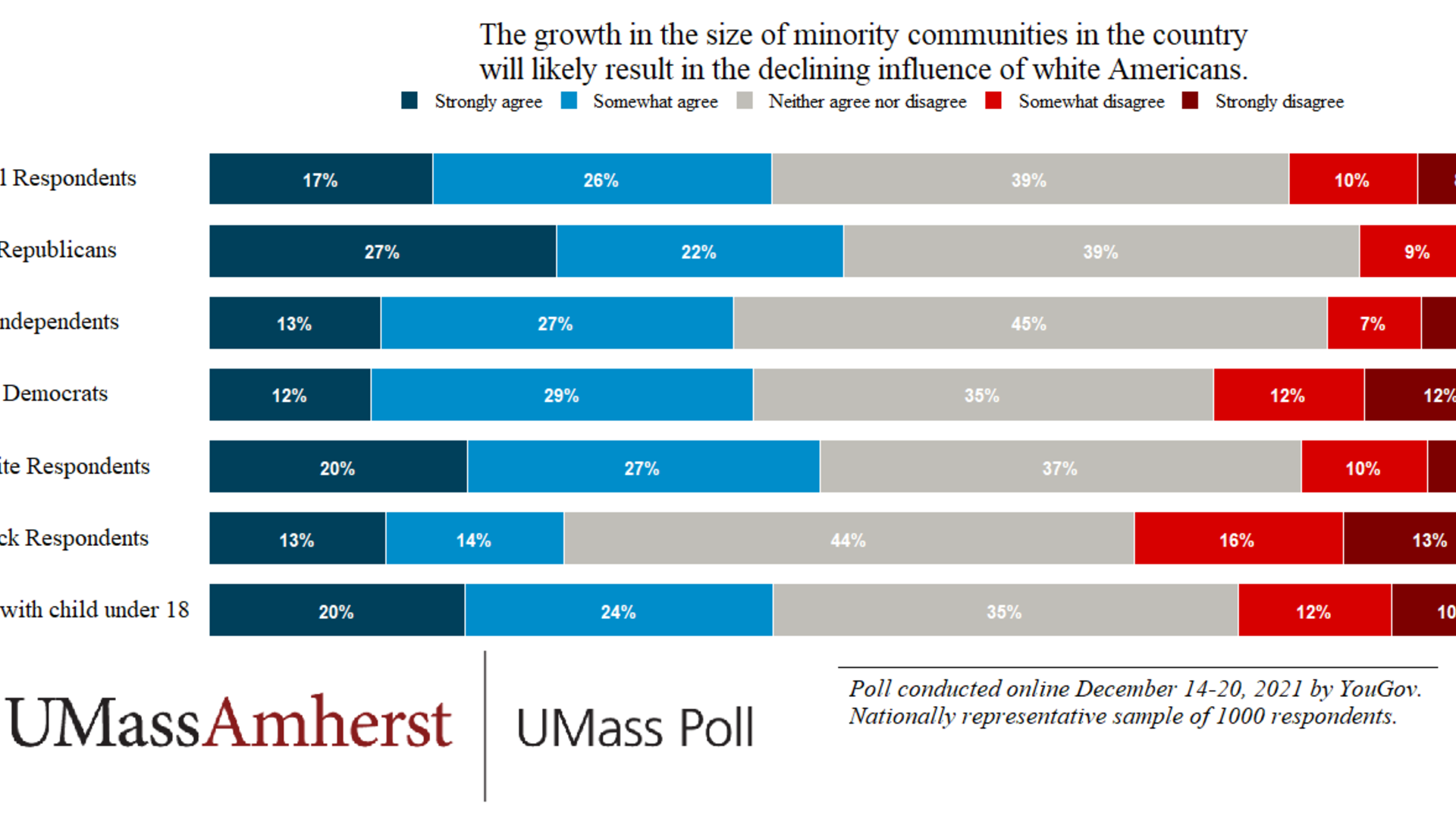 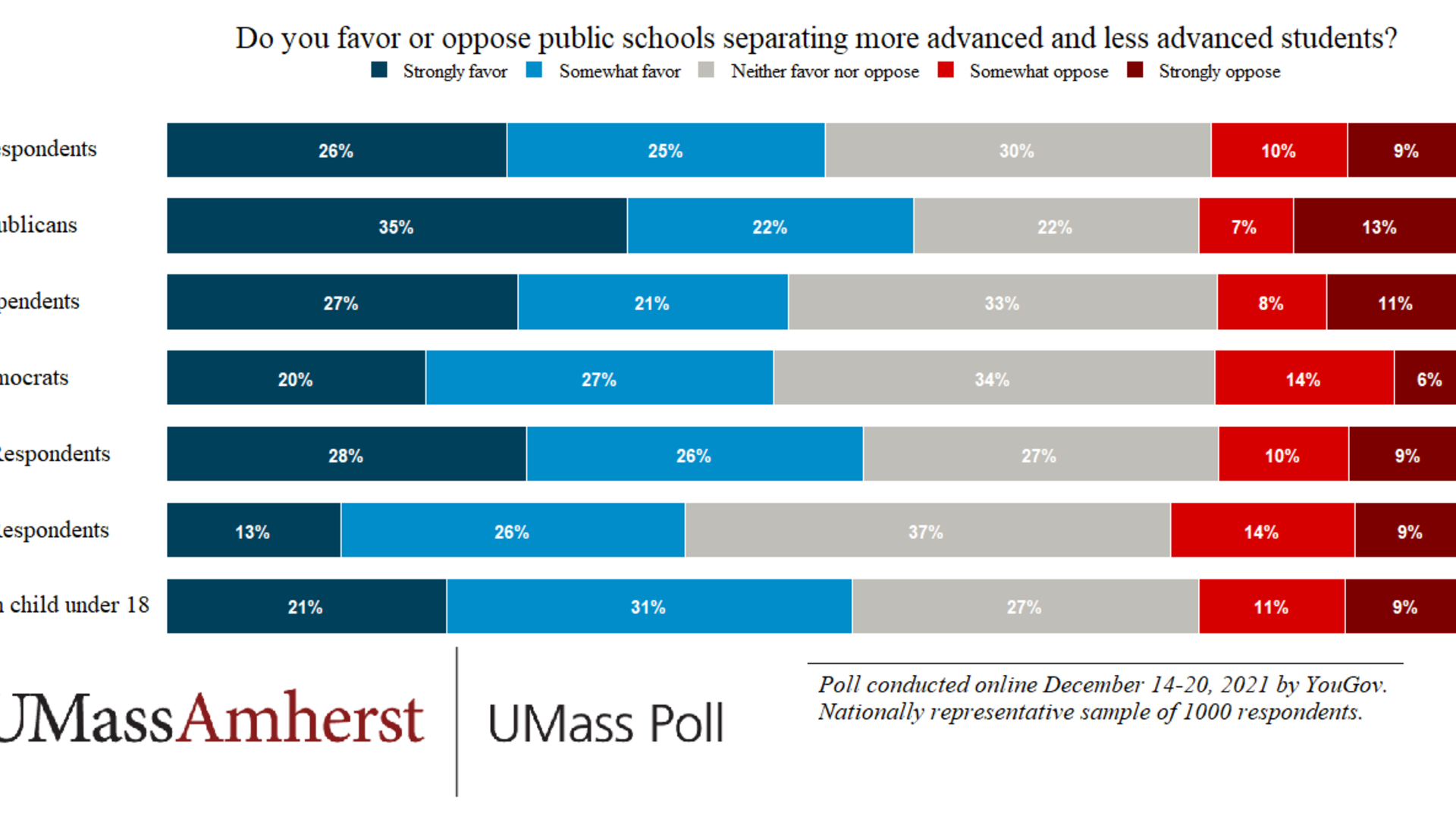 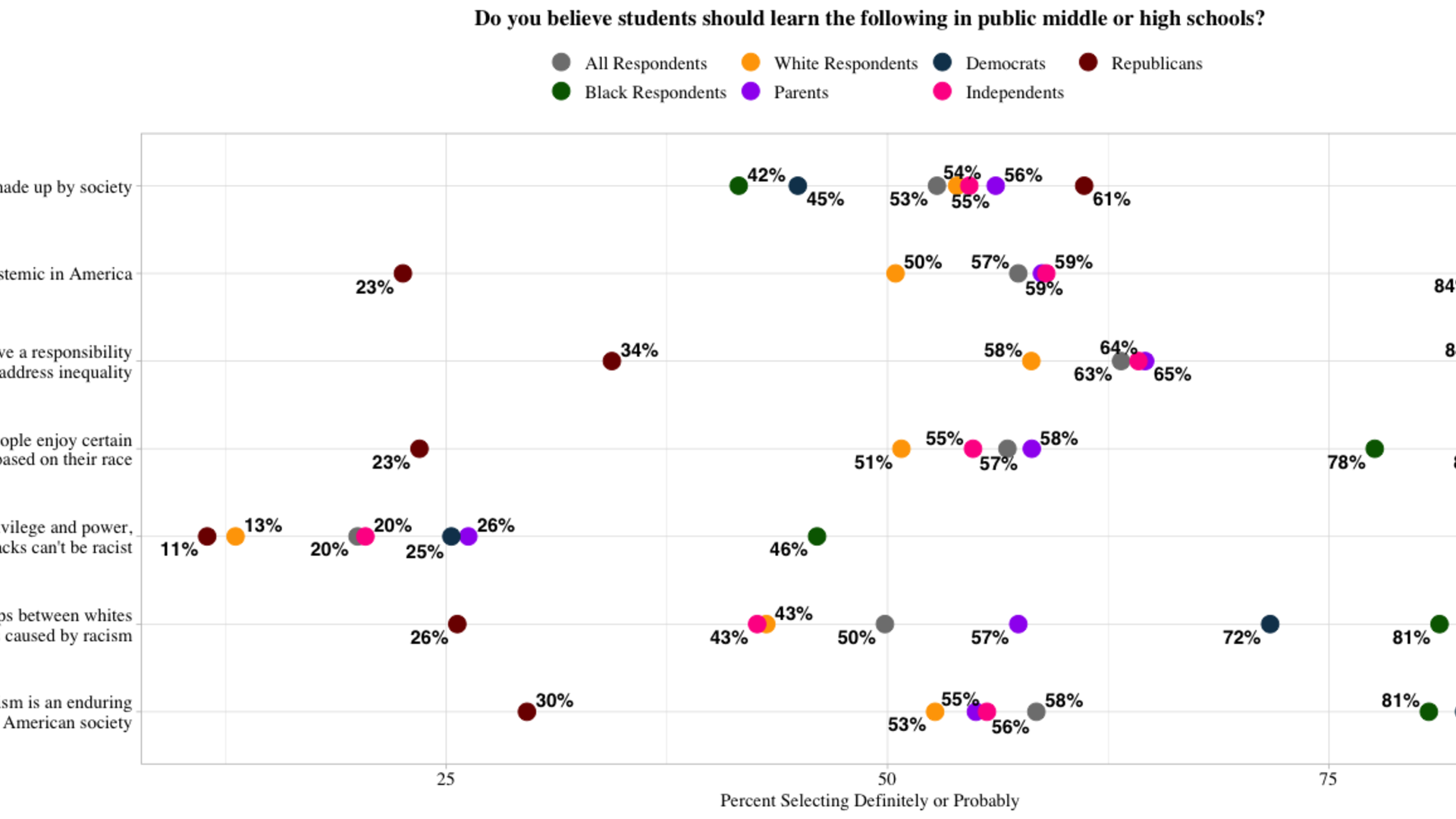 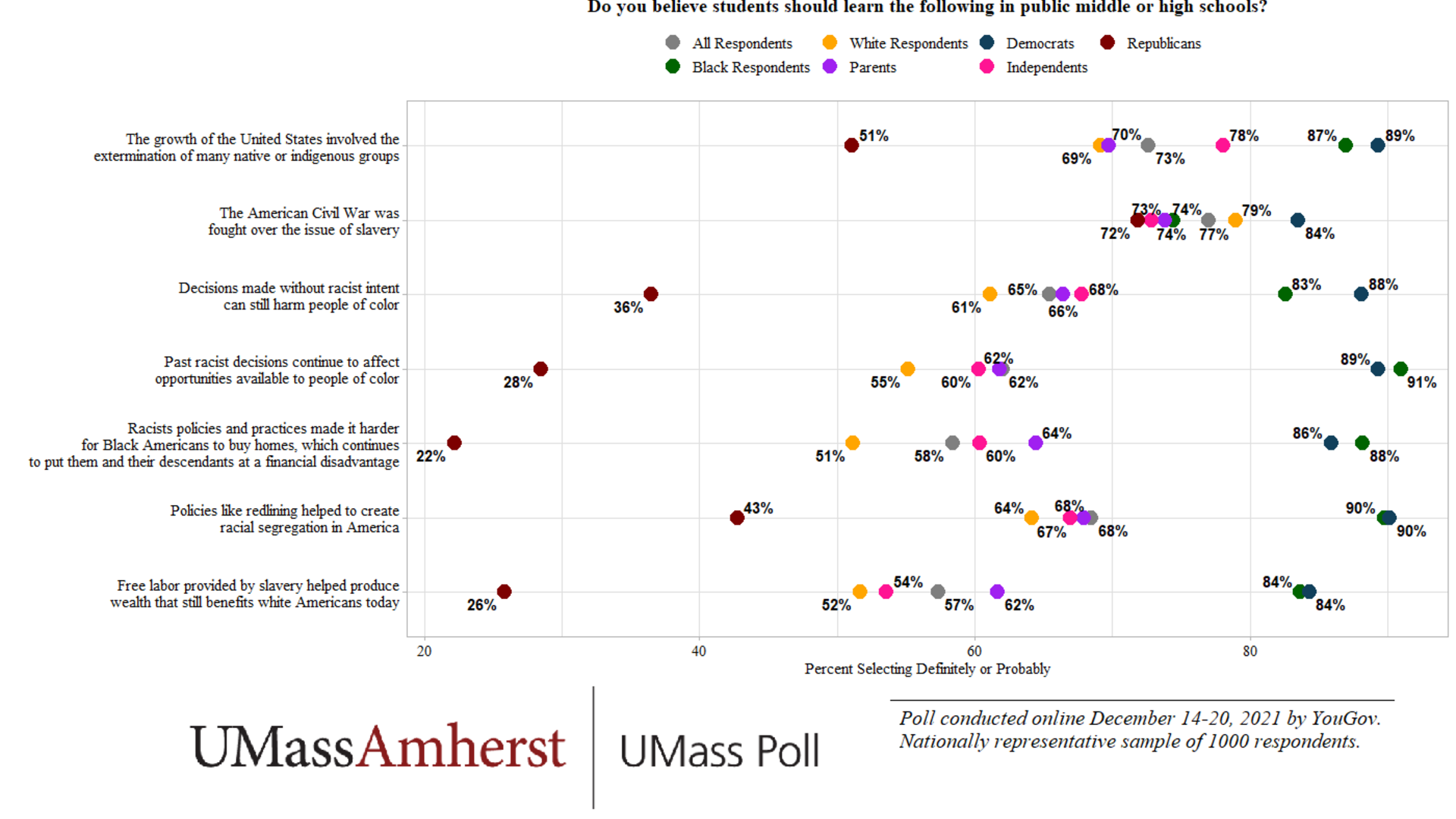 The poll found that over half of Americans (53%) believe that white people in the U.S. have certain advantages because of the color of their skin, and 7 in 10 (69%) say they are angry that racism exists. The number of Republicans agreeing with these views falls significantly below these overall numbers, however, as only 1 in 5 (19%) say whites enjoy certain advantages due to their race and only slightly more than half (56%) express anger about racism’s existence.

“The reality of systemic racism has become apparent to the nation’s residents, as clear majorities of Americans recognize the existence of white privilege and the pervasiveness of racial problems, and express anger that racism still exists in the United States,” says Tatishe Nteta, associate professor of political science at UMass Amherst and director of the poll. “The question that is to be debated in the halls of Congress, state legislatures, and in our local communities is what, if anything, should be done about these problems.”

The poll asked a number of questions about critical race theory and, despite the controversies being generated over the topic, one-fifth of all respondents said that they had never even heard of it. Asked about more than a dozen individual statements concerning the lasting structural impacts of slavery, racism and bias in the U.S., majorities of the poll’s respondents believe that public middle and high school students should learn about them.

“As the nation’s local school board meetings have increasingly focused on the content of the curriculum of public schools and purported teaching of critical race theory, the ongoing debate may be an instance of much ado about nothing,” Nteta says. “Three out of four Americans are actually in favor of teaching children about racial inequality in the U.S., with more than a third of Americans wanting the nation’s children to learn ‘a lot’ about the sordid history of race in the U.S. and the ongoing legacy and impact of racial discrimination, segregation and prejudice on people of color. In short, most Americans believe that these topics should be part and parcel of the curriculum of the nation’s public schools.”

While 75% of the poll’s 1,000 respondents – and 95% of Democrats – believe that public schools should teach at least “a little” about racial inequality, more than half of Republicans (52%) say that schools should not teach the subject at all.

“Given the attention that the teaching of critical race theory has garnered from prominent conservative media pundits, Republican political candidates and Republican elected officials, it is by no means shocking that the only groups for whom a majority desires less attention to racial inequality in public schools and opposes the teaching of the nation’s racial history and the contemporary impact of racism are Republicans, conservatives and Trump voters,” Nteta says.

“Is critical race theory the latest racial dog whistle? It has certainly become a favorite target for GOP elites, and the message seems to have made its way to rank-and-file Republican voters,” says Alexander Theodoridis, associate professor of political science at UMass Amherst and associate director of the poll. “Race has always been central to any understanding of American politics, and our results make it clear that this remains true. Most Republicans tell us they have heard, seen or read about CRT, and the majority of Republicans do not believe public schools should teach about racial inequality at all. There are massive partisan divides on whether students in public middle or high schools should learn that racism is an enduring part of American society, or that white people enjoy privileges based on their race.”

Two-thirds of Republicans believe that the growth of the number of immigrants to the U.S. “means that America is in danger of losing its culture and identity” (67%) and that “the Democratic Party is trying to replace the current electorate with voters from poorer countries around the world” (66%). Only slightly more than one-third of the poll’s overall respondents (35% each) agreed with these statements.

“Today, we are seeing a collision between two powerful forces – a growing, diverse, multiracial coalition that wants to achieve a truly equitable multiracial democracy, and a shrinking, predominantly white coalition that is fearful of demographic change and believes that it threatens American culture and identity. This is a very combustible mix, and it helps explain the intensity and polarization of our politics today,” says Jesse Rhodes, professor of political science at UMass Amherst and associate director of the poll. “The fact that 35% of Americans believe that the Democratic Party is trying to replace the current electorate with voters from poorer countries is a direct reflection of messages about ‘replacement theory’ circulated on Fox News, One America News and other right-wing media. These dangerous messages parrot white supremacist and neo-Nazi talking points, and can inspire hate crimes and other forms of violence.”

“You can see why immigration is such an explosive issue in America – the message that the Democratic Party is trying to replace the current electorate with voters from poorer countries around the world sounds like the same fears Americans had about Tammany Hall bosses putting ballots in the hands of Irish as they came off the boat during the potato famines,” says Raymond La Raja, professor of political science at UMass Amherst and associate director of the poll. “These beliefs tell you why Trump’s anti-immigrant rhetoric was so effective for him among Republican voters, and it will continue to be a dominant theme within the Republican Party, with or without Trump.”

The poll also asked respondents about their views of tracking – the practice of separating advanced and less advanced students to teach them based on their current level.

“A narrow majority of Americans favors ‘tracking’ students based on ability, particularly in STEM subjects, in schools,” Rhodes says. “This is a difficult subject, as tracking has often been criticized for reinforcing racial and economic inequities. It’s likely that self-interest plays a powerful role. Parents want to be able to obtain advantages for their children, even if it risks coming at the expense of others’ children.”

However, Nteta points out that, “While the majority of Americans continue to oppose the provision of cash payments to the descendants of slaves, key members of the Democratic coalition that include progressives, African Americans, the highly educated and young people all express their support for all forms of reparations. Additionally, policies that provide educational and housing support to the descendants of slaves emerge as more popular forms of reparations for the over 200 years of slavery in America.”

A majority of the latest poll’s respondents (52%) also said that the federal government should issue an apology to the descendants of slaves.

This University of Massachusetts Amherst Poll of 1,000 respondents nationwide was conducted by YouGov Dec. 14-20. YouGov interviewed 1036 total respondents who were then matched down to a sample of 1,000 to produce the final dataset. The respondents were matched to a sampling frame on gender, age, race and education. The frame was constructed by stratified sampling from the full 2019 American Community Survey (ACS) one-year sample with selection within strata by weighted sampling with replacements, using the person weights on the public use file.

The margin of error within this poll is 3.1%.

Topline results and crosstabs for the poll can be found at www.umass.edu/poll