The Sierra Club’s national magazine, “Sierra Magazine,” recently announced that the University of Massachusetts Amherst is among the top-20 environmentally friendly institutions of higher learning in North America. 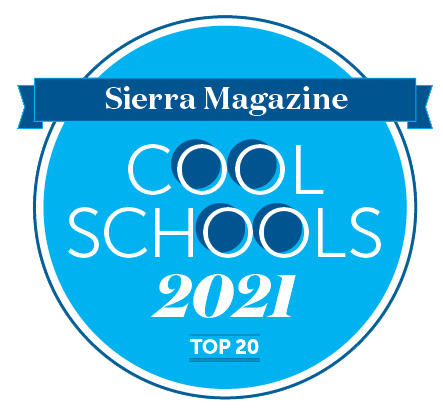 UMass, which ranked 18 out of 328, is among those that “have displayed a deep and thorough commitment to addressing climate change, protecting the natural world and encouraging environmental responsibility both through their campus operations and course curricula,” according to “Sierra Magazine.”

Schools were ranked by independent researchers on a host of criteria, including environmentally focused curricula, renewable energy and waste management operations, student engagement with environmental activism and each school’s planning and administrative standards.

Some of the recent efforts that caught the attention of “Sierra Magazine” include the fact that UMass is home to the state’s first fast-charging Electric Vehicle (EV) station; that it has three operational solar canopies and five large rooftop systems, with two more canopies on the way. When complete, these arrays will deliver a whopping 10 megawatt-hours (MWh) of electricity, which could power 1,420 homes for a year. The campus is also home to a task force of students, faculty and staff who are creating a carbon-mitigation plan to move UMass toward the goal of zero carbon emissions.

Yet, building greener campus infrastructure is not enough. “We’ve found that the most powerful way for UMass to address the various environmental crises of our time is to link the operational and the academic, and present hands-on opportunities for learning and action,” says Ezra Small, UMass’s campus sustainability manager. “More than recycling or turning off the lights, we ask: how can sustainability further the UMass mission, from efforts at boosting diversity and inclusion to resource use and food justice?”

“Many transformative green projects at UMass were originally conceived of by a student,” says Darci Maresca, assistant director of the School of Earth and Sustainability. Take, for instance, the UMass Carbon Literacy Project (CLP), which trains students to become ambassadors to their peers for the cause of raising awareness about the costs and impacts of carbon emissions. CLP is a global program, and UMass Amherst is the first U.S. organizational partner to deliver it internally. Angie Gregory, then a graduate student in sustainability science, spearheaded the effort to bring CLP to UMass and implement it.

Then there is ELEVATE, a new Ph.D. fellowship program supported by the National Science Foundation to train the next generation of leaders in solving the planning, climate change, equity and technical challenges in the transition to renewable energy sources.

“The pandemic, social unrest, climate change: this feels like a global watershed moment,” says Maresca. “And now, UMass is collaborating across all fields, academic and institutional, like never before. We’re meeting the demands of the moment, and our students are getting the training that prepares them for the world that awaits.”