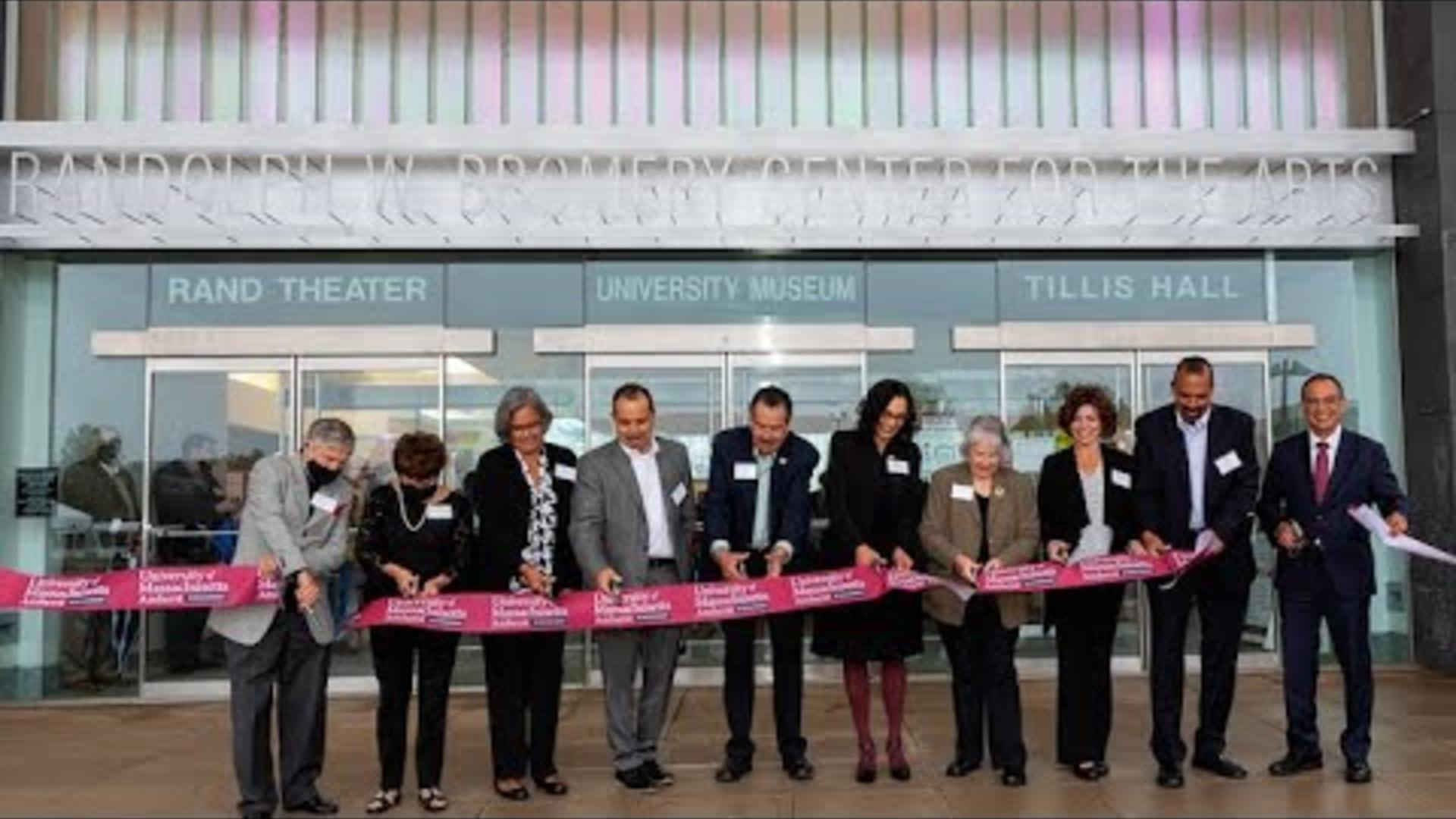 VIDEO: Ceremony celebrating the renaming of the Fine Arts Center building and its main stage

AMHERST, Mass. – The University of Massachusetts Amherst honored its deep roots in the performing and fine arts at a ceremony celebrating the renaming of the Fine Arts Center building and its main stage. The building has been named the

The event also served as an unveiling for the newly renovated Arts Bridge on the fourth floor of the Bromery Center, which features an array of multidisciplinary teaching spaces for the arts, including a gallery, design studio, rehearsal space, recording studio, animation studio and lab, and music classroom.

Fine Arts Center Director Jamilla Deria said, “What we are truly celebrating today is a legacy of deep commitment – to the arts, arts education and the university. Dr. Bromery and Dr. Tillis profoundly reshaped UMass Amherst. We’re honoring these campus leaders for the sweeping changes they made in the arts and art education on campus, but we do this mindful that their influence goes well beyond the arts and resonates across campus. And it’s fitting that alongside these two visionaries, we’re also celebrating the Arts Bridge, and specifically the legacy of Laura Bailey, Julie Hayes and Claude Bersano. As we carry the revolutionary ideas of Bromery and Tillis into modernity – and as the university responds to research that affirms the critical role of the arts in higher education – it’s projects like the Arts Bridge and the donors who make them possible that will ensure a lasting legacy of the arts at UMass.”

The Bromery Center for the Arts

Perhaps the most important example of modern architecture on the UMass Amherst campus, the Bromery Center was conceived as a gateway to the campus at the south end of the Campus Pond. Designed in 1968 by Kevin Roche of Roche, Dinkloo and Associates, the building was seen as an innovation on American college campuses. It remains one of the most visible structures on campus. It was under the leadership of Chancellor Bromery that the Fine Arts Center was built.

Bromery, a geologist and geophysicist, came to UMass Amherst in 1967 as a professor of geology and rose quickly through the leadership ranks. He served as vice chancellor for student affairs, and then led the campus as chancellor from 1971 to 1979. His appointment as chancellor made him the second African American ever to lead a predominantly white campus, and the first African American to lead UMass Amherst. During his tenure, the U.S. was in political, social and economic upheaval. Students were protesting the war in Vietnam, the Watergate scandal occurred, and the recent gains of the Civil Rights Movement were being challenged.

UMass Amherst Chancellor Kumble Subbaswamy said, “Chancellor Bromery also inherited a campus experiencing explosive growth. As the bulging baby boomer demographic chose a path to college, applications to the university grew from about 5,000 in 1959 to more than 20,000 ten years later, and enrollment nearly tripled in the decade leading up to 1972.” He noted that Bromery evened the ratio of male and female students to 50-50 and intensified recruitment and support for students of color.

Subbaswamy also noted that it was during this period that the university was able to recruit jazz legends Max Roach, Archie Shepp and Tillis to the faculty, as well as acquire the archives of both W.E.B. Du Bois and Horace Mann Bond. It was during this time that UMass Amherst’s reputation as a leader in African American studies was strengthened, and the W.E.B. Du Bois Center was established.

“But it was Chancellor Bromery’s approach to the arts that most clearly defines his leadership and his legacy on this campus,” Subbaswamy said. “After the FAC opened in 1975, Dr. Fred Tillis became one of its earliest directors, and the two men shared a vision of the arts as fundamentally and necessarily inclusive – and the chancellor was not afraid to challenge the academic status quo to realize that vision.”

At today’s event, Subbaswamy also credited Professor John Bracey Jr., a founder of the campus’s W.E.B. Du Bois Afro-American Studies Department, with the idea to rename the Fine Arts Center for Bromery and also announced the creation of the University Black Presence Initiative, created under the direction Bracey. The initiative will bring together voices and stories of Black faculty, students, staff and alumni throughout the university’s 160-year history and chronicles their contributions to UMass.

During today’s celebration, Subbaswamy also announced the renaming of the main stage in the Bromery Center in honor of Frederick C. Tillis, Ph.D. a noted composer and music scholar, who was recruited to join the UMass faculty by music department head Phillip Bezanson in 1970. In 1978, Bromery tapped Tillis to serve as the director of the Fine Arts Center, a position in which he served for nearly 20 years. He remained connected to the organization after his retirement in 1997 until his death in 2020 at age 90. Tillis is remembered as a musician, composer, educator, poet and passionate arts advocate.

Tillis profoundly shaped the cultural and musical landscape at UMass Amherst, the Pioneer Valley and beyond. His work as a performer and composer spanned jazz and European music traditions, encompassing a wide range of cultural references. His more than 100 compositions include works for piano and voice, orchestra and chorus, along with chamber music and works in the African American spiritual tradition. Tillis also published 15 books of poetry.

Tillis is credited with helping to launch some of the university’s most successful arts initiatives, including the jazz and Afro-American Music Studies program, the Jazz in July Summer Music Program, New World Theater, the Augusta Savage Gallery and the Asian Arts and Culture Program. He also received several awards and represented UMass as a cultural ambassador, performing locally, nationally and internationally with students, alumni and faculty such as Salvatore Macchia, Jeffrey Holmes, David Sporny and Horace Boyer.

“During his career, Dr. Tillis shaped our concentration in Jazz & African American Music – one of the first in the country – into an internationally renowned program,” Subbaswamy said. “And from the earliest days of the FAC, as director, he defined the future trajectory of the center by presenting both Western and non-Western artists and art forms, thereby establishing the university as a national leader in inclusive programming. By shaping our artistic excellence across learning, discovery and engagement, Dr. Tillis created an area of strength for the campus, allowing us to build on his legacy.”

In 2020, the university undertook a $12.57 million renovation project on the fourth floor of the Bromery Center to transform the bridge of the center into a makerspace for the departments of art, music and dance, and theater. The multidisciplinary space includes a design studio, theater rehearsal studio, costume shop, music education classroom, music seminar room, recording studio, and newly designed spaces for animation and art classes and a computer lab.

“These state-of-the art facilities encourage emerging student artists as they hone their craft and practice, and support faculty as they conduct cutting-edge research and creative production,” Subbaswamy said. “Today, with the opening of the Arts Bridge, we are reaffirming our legacy of making the arts inclusive and accessible.”

Within the space is the Laura Bailey Costume Shop, generously supported by Laura Bailey, who graduated from UMass in 2003, and her parents Doug and Sara Bailey. Bailey says her career in film as a script supervisor for independent films was grounded in her UMass education in theater, which focuses as much on performance as it does the behind-the-scenes, hands-on work of mounting a production.

Also a part of the Arts Bridge, the Julie C. Hayes and Claude Bersano Recording Studio is named in recognition of Hayes, the former dean of the College of the Humanities and Fine Arts and her late husband, Claude Bersano, who was a recording engineer and who had a love for classical organ music. The studio is supported by a fund created in their honor by Bill ’86 and Madeleine ’89 Noland. The fund will support the purchase and maintenance of recording equipment and other purposes related to the recording studio. 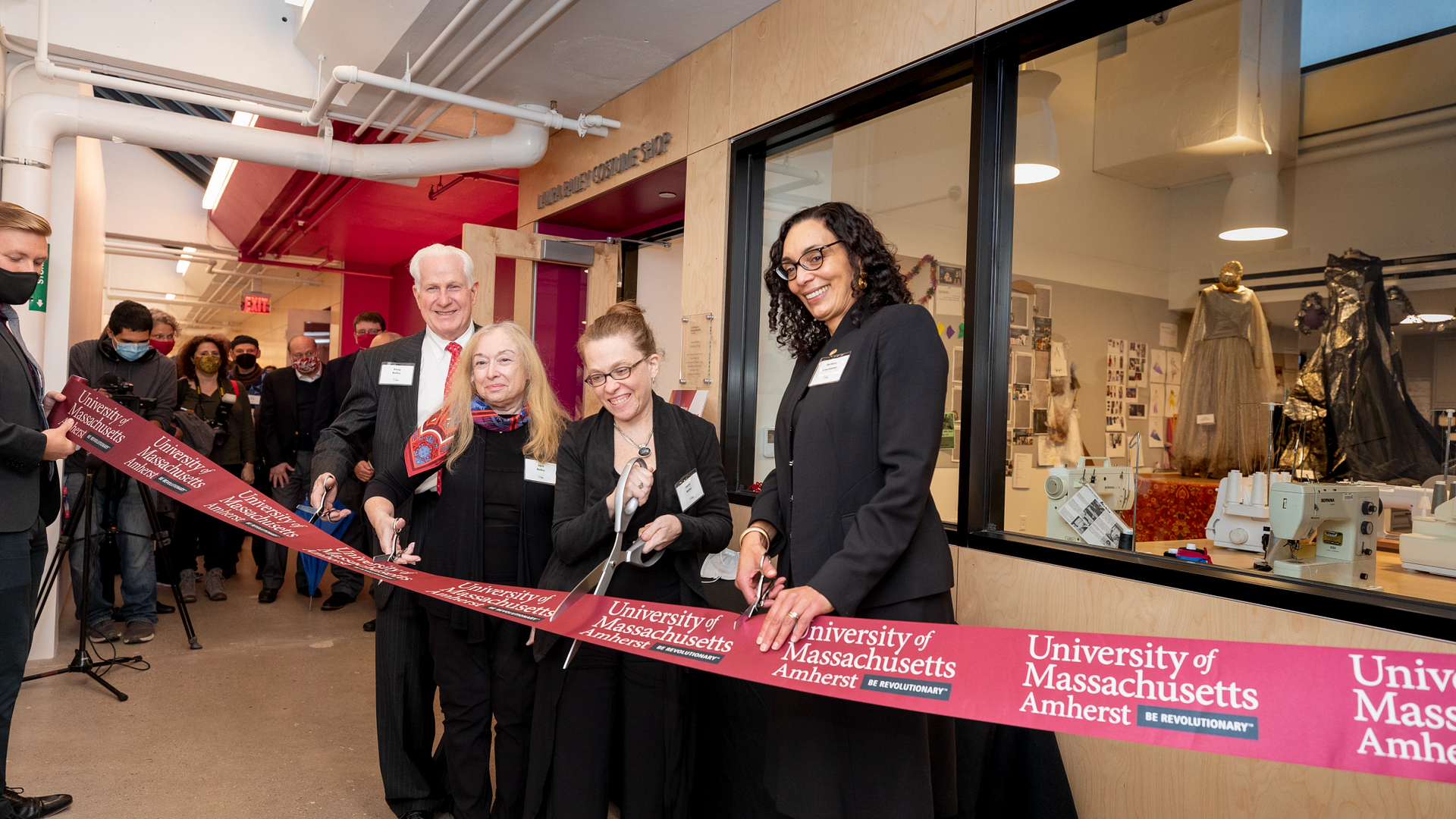 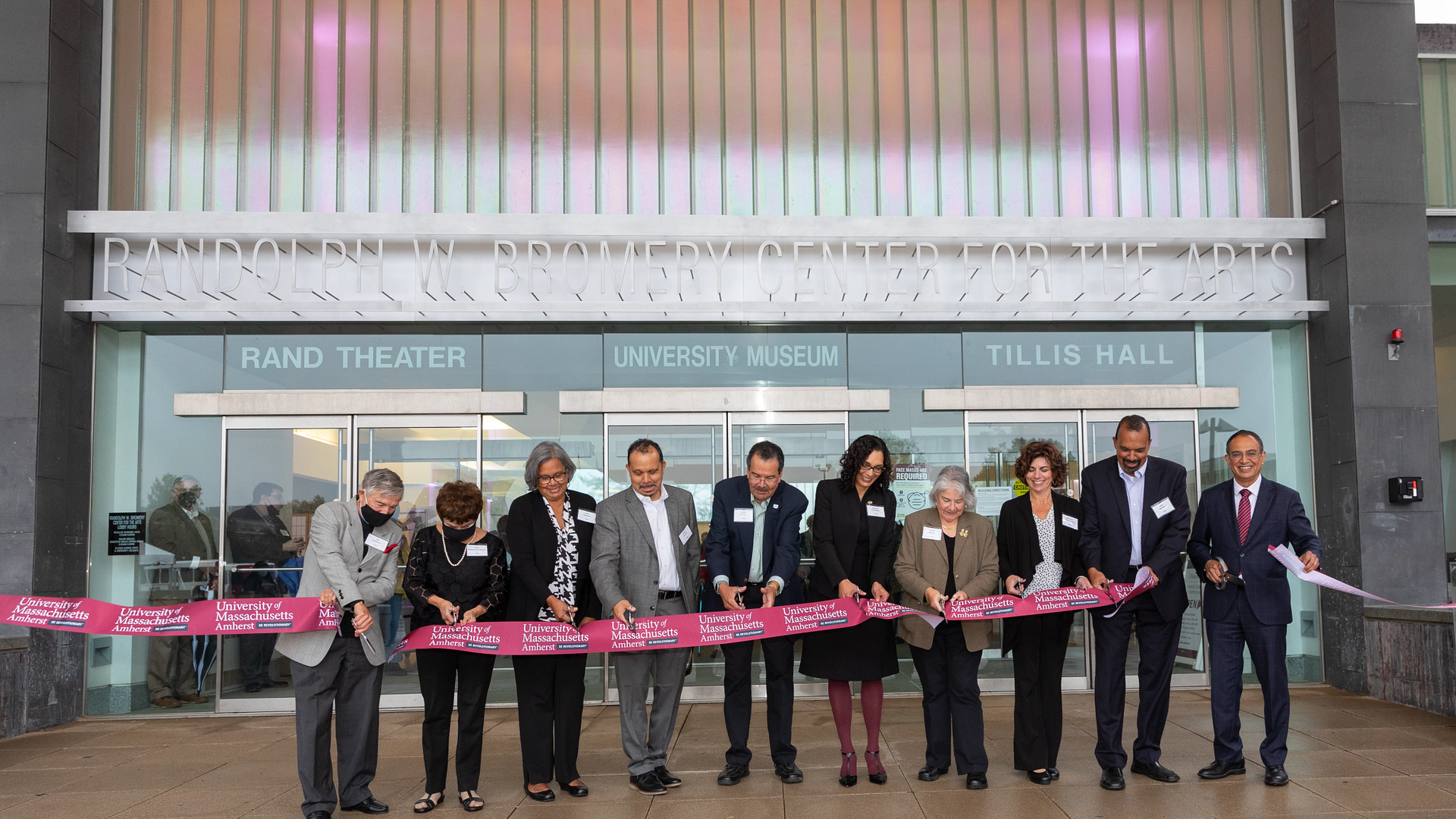 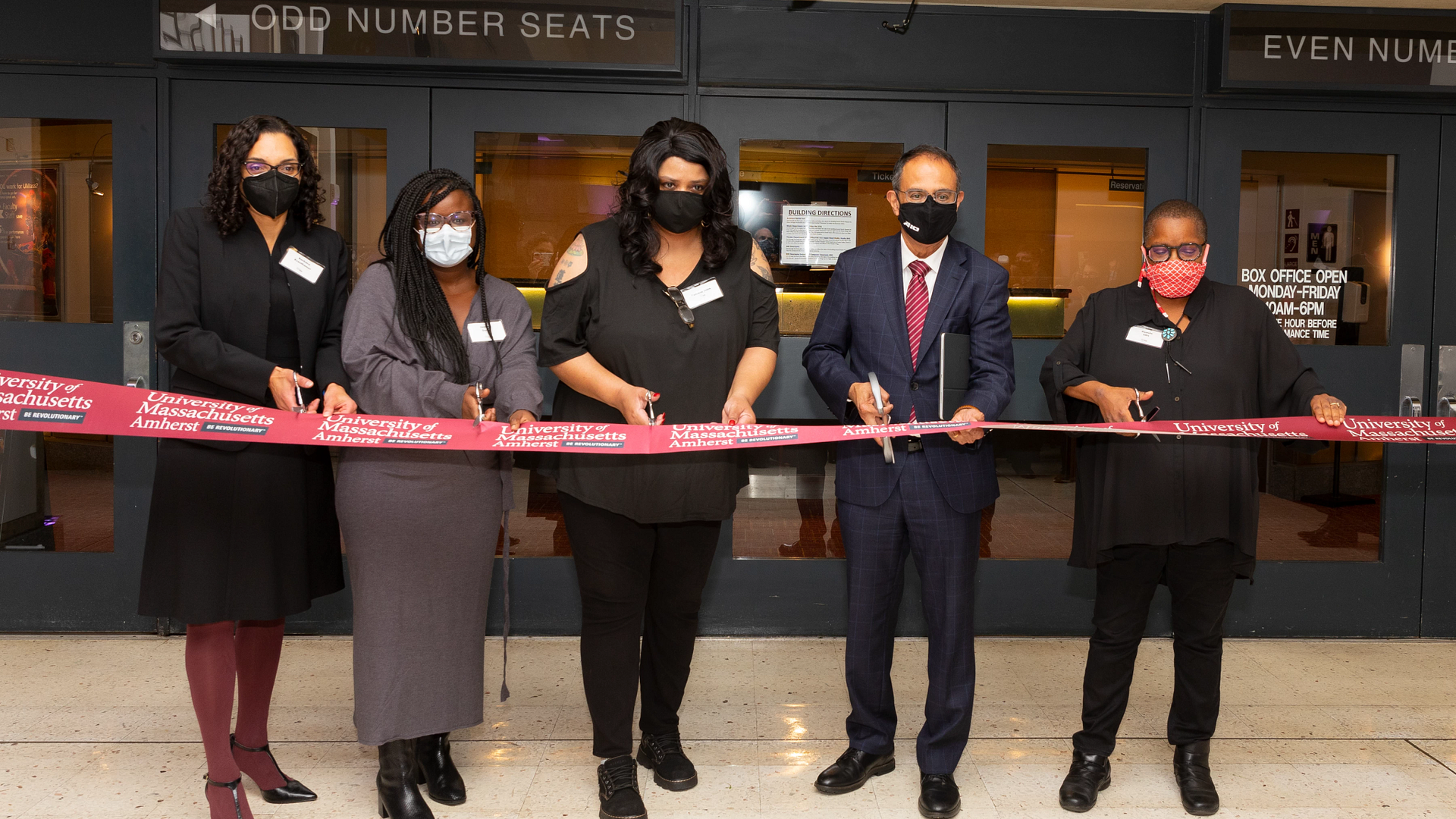 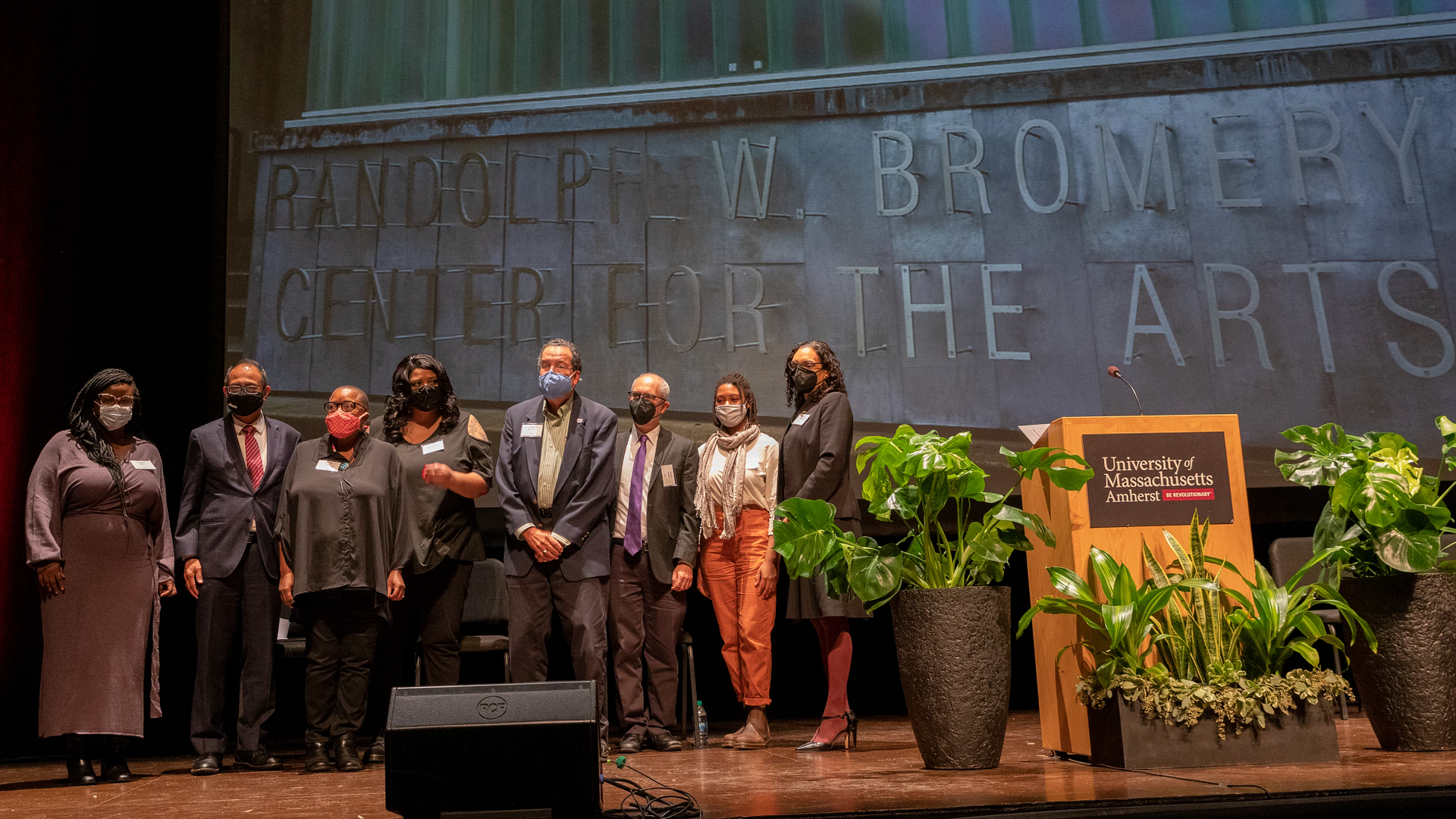 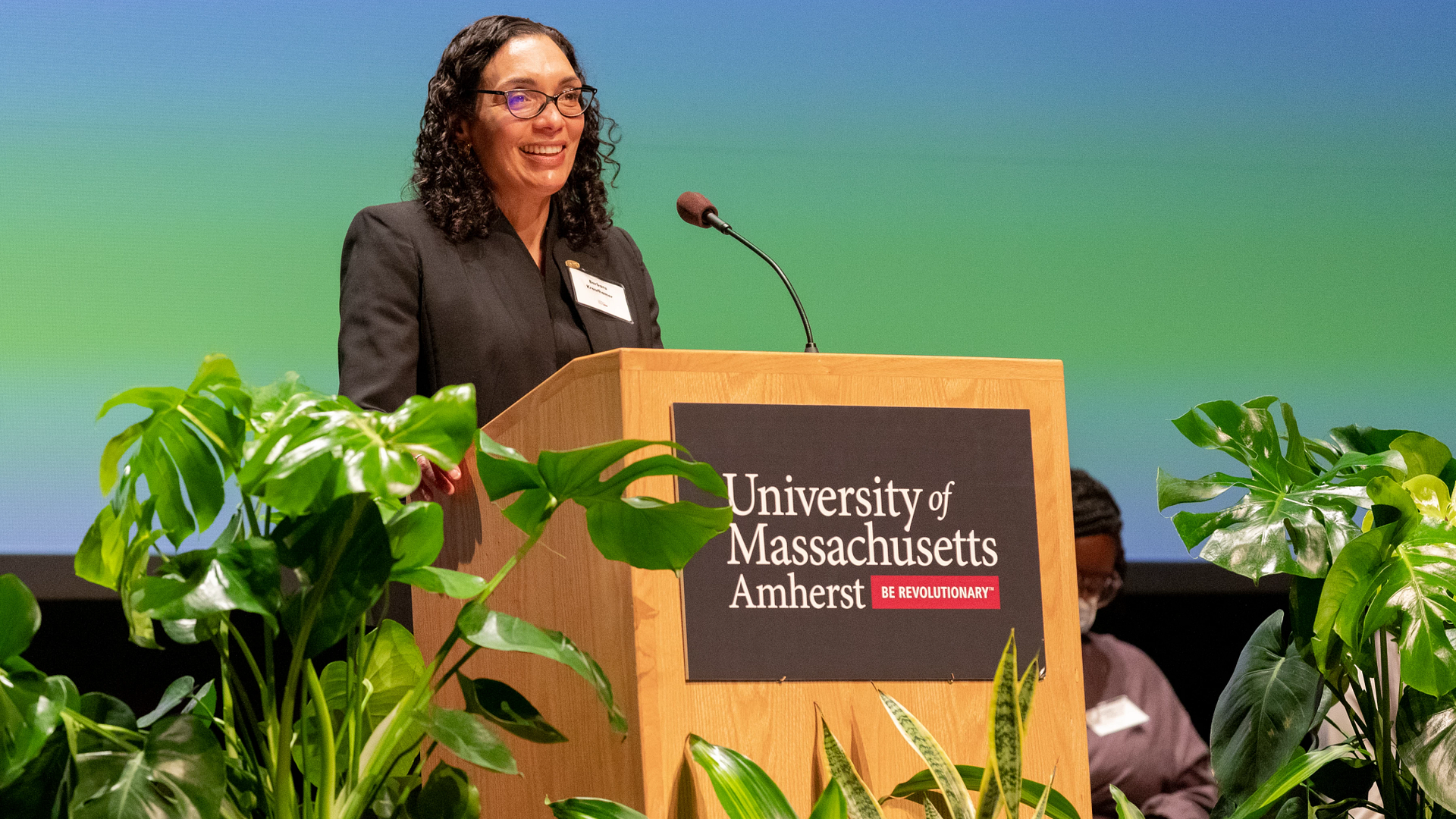 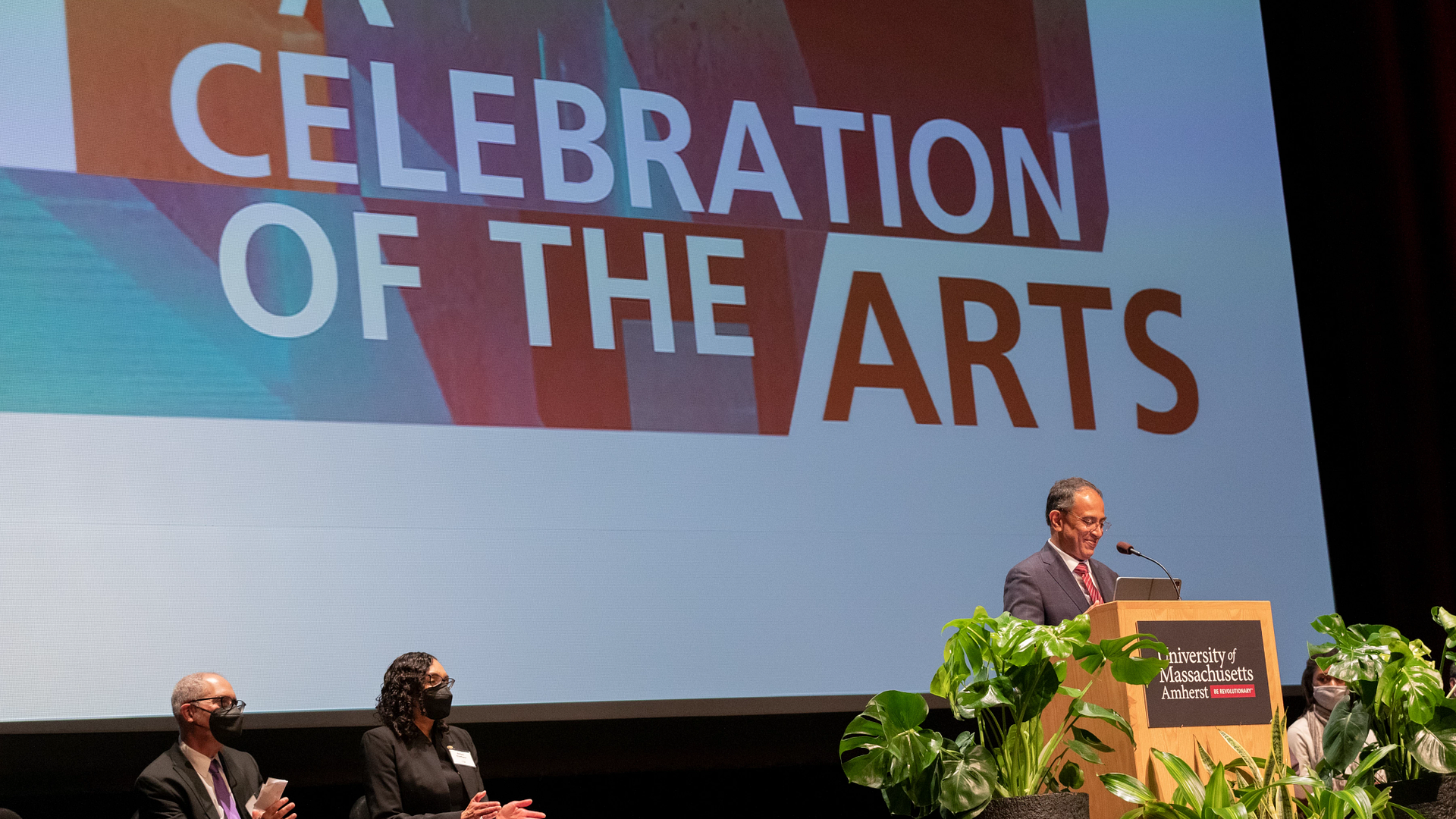 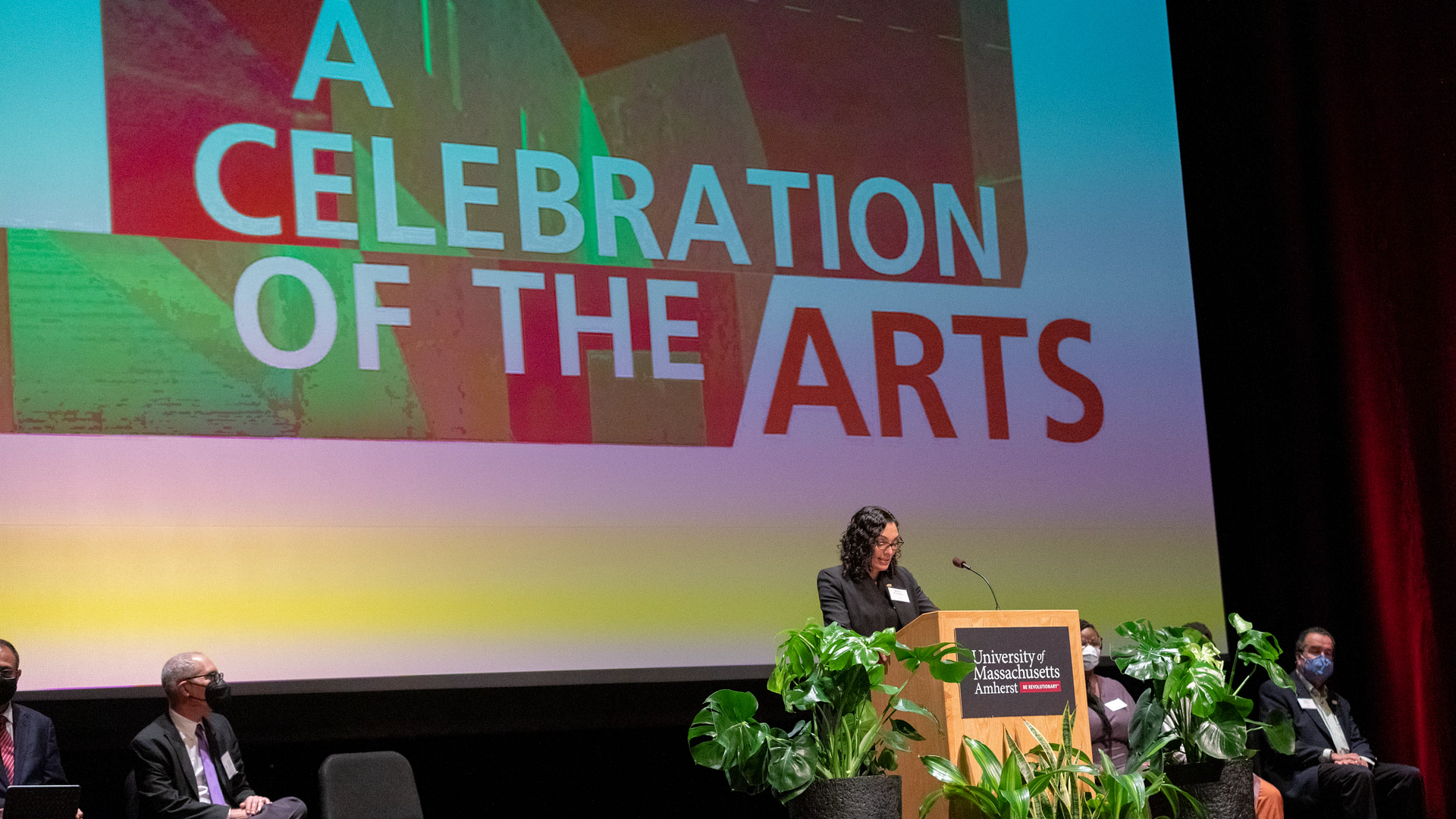 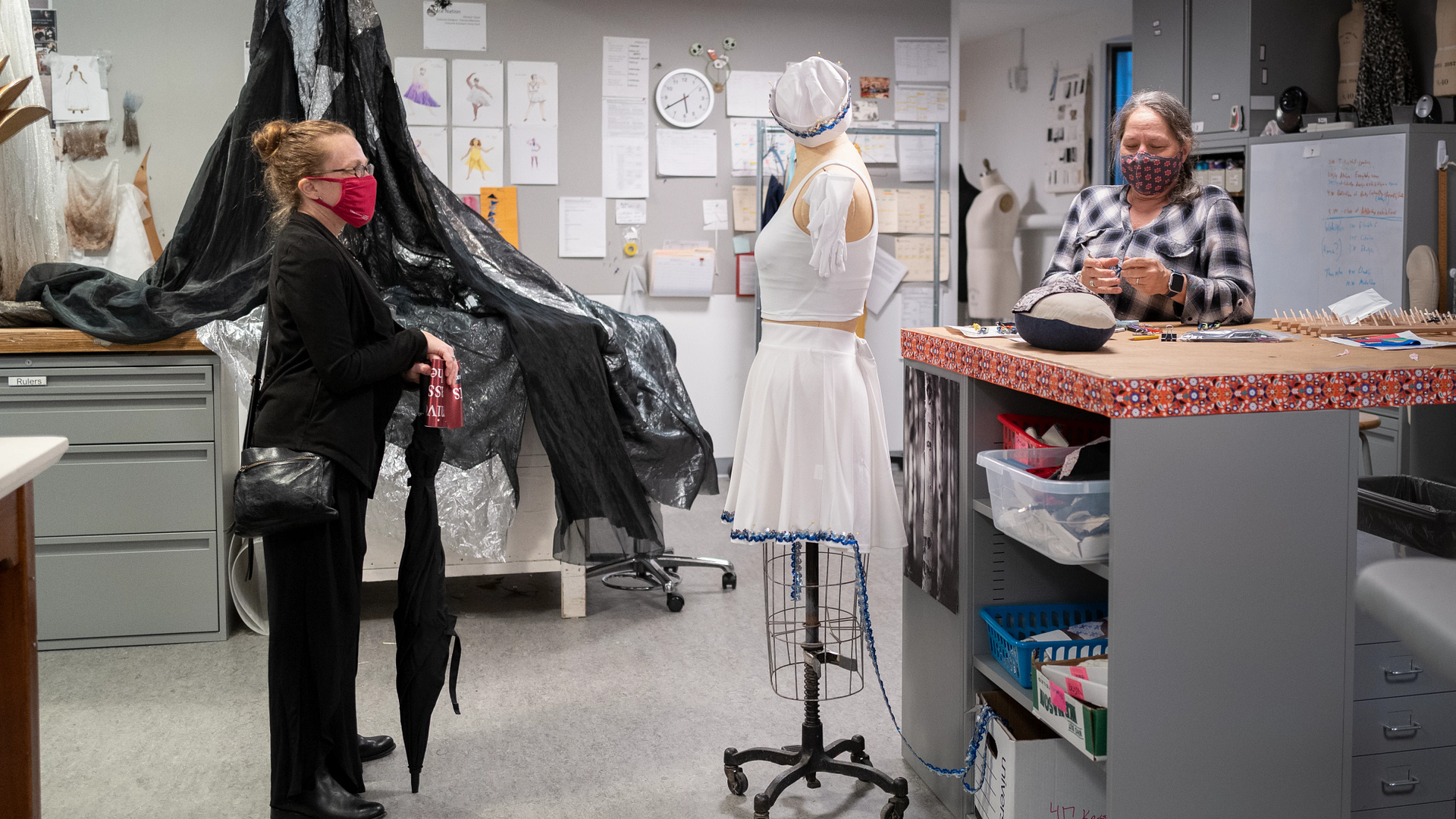 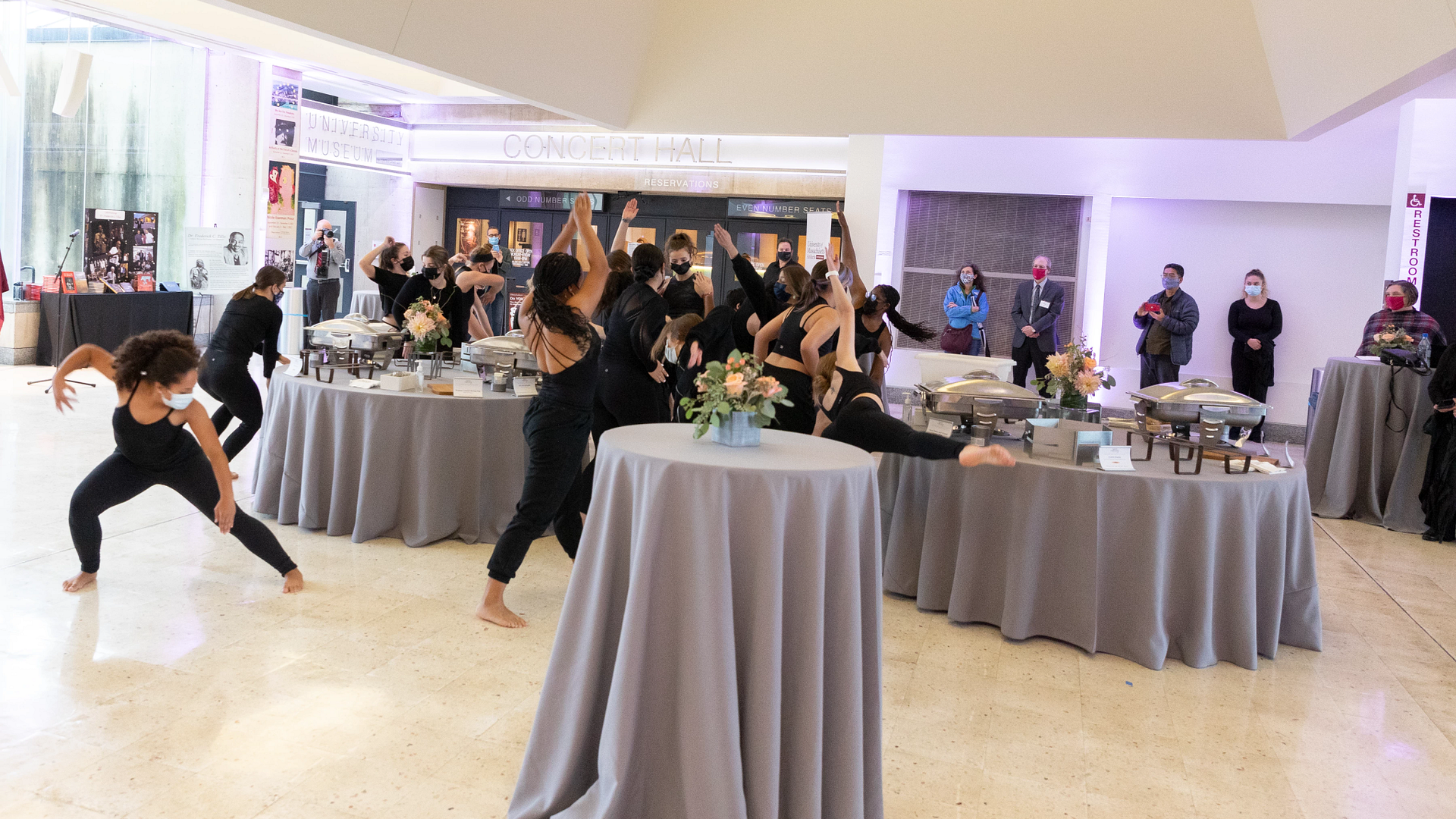 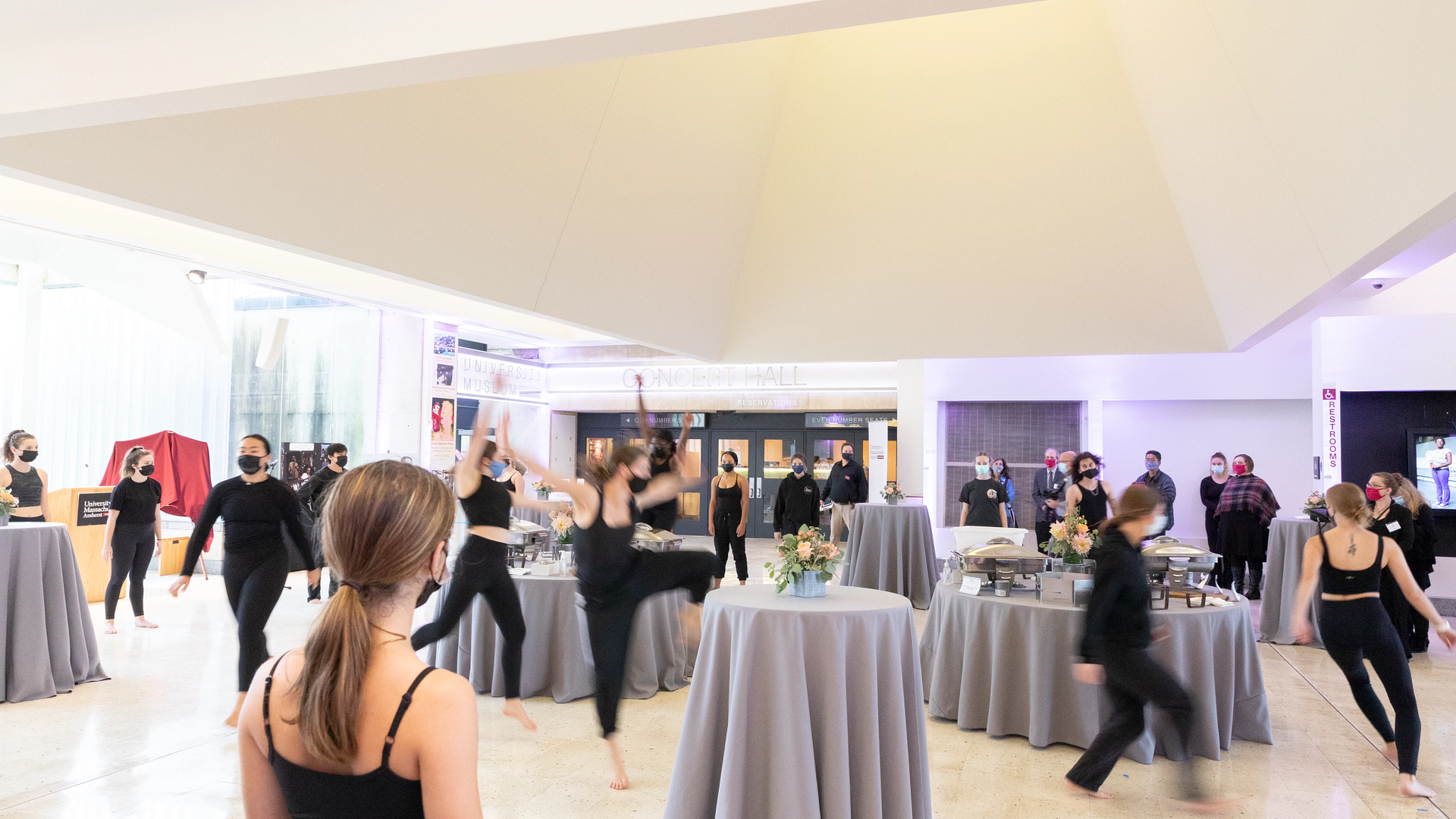