AMHERST, Mass. – The University of Massachusetts Amherst has been designated as a Bike Friendly University (BFU) by the League of American Bicyclists, a grassroots advocacy organization encouraging better bicycling and protecting the rights of people who bike. UMass Amherst is one of only eight universities in Massachusetts to receive the commendation for providing safe, accessible biking on campus. 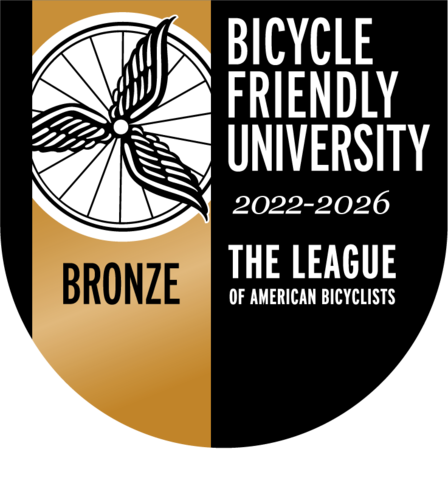 “We first applied for the designation in 2012 and didn’t quite make the list, receiving an Honorable Mention at the time,” says Ezra Small, campus sustainability manager. “This bronze award shows that UMass Amherst is committed to promoting bicycling as a healthy, environmentally friendly way of getting around campus and that we have improved our bike access significantly over the past decade.”

“I am pleased to celebrate 37 new and renewing Bicycle Friendly Universities joining the movement to build a Bicycle Friendly America for everyone,” said Bill Nesper, executive director of the League of American Bicyclists. “Bicycle Friendly Universities, like UMass Amherst, offer a far more holistic experience of campus life for students, faculty and staff by implementing policies, programs and infrastructure improvements that make for safer and easier car-free commutes, healthier lives through increased physical activity and a campus community more connected to its surroundings.”

Providing bike-friendly accommodations is a vital part of the university’s Sustainable UMass initiative. In recent years, four-foot-wide bicycle lanes have been constructed on the primary campus roadways of Massachusetts Avenue, North Pleasant Street and Commonwealth Avenue to promote safe bike travel. In 2016, the university expanded its bike access for students, faculty and staff by becoming a founding member of ValleyBike Share, and six of their bike share stations are now spread across campus to allow students, faculty and staff to easily rent and return bikes.

The UMass Bicycle Commuter Program coordinates the Campus Bicycle Advisory Committee to help the university prioritize bike-related goals on campus, and the UMass Amherst Bike Library rental program, operated by the Student Government Association and the Physical Plant, lets students, faculty and staff borrow bikes for free, for as long as an entire academic year.