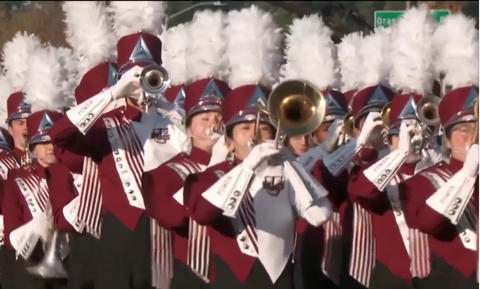 The 380-members of the Minuteman Marching Band­—wearing their new uniforms for the first time in Massachusetts—will perform at halftime of the New England Patriots 2018 home-opener on Sunday, Sept. 9 at Gillette Stadium in Foxboro.

The band debuted the uniforms Jan 1. at the Rose Parade in Pasadena, California, before 700,000 spectators and 44 million television viewers worldwide.

Kickoff is at 1 p.m. for the Patriots game against the Houston Texans, which will be aired nationally on CBS Sports.

Band director Timothy Todd Anderson said, “Since 2010, the Minuteman Marching Band has made numerous appearances at Gillette Stadium, but we haven’t been there for a Patriots game during that time. The last time the UMMB played at a Patriots game, Bill Parcells was the coach and Tom Brady was a student at the University of Michigan. So, we’re very excited to perform for an audience that may have never seen us before.”

Known as the “Power and Class of New England,” the Minuteman Marching Band represents the university regularly at events throughout the state and beyond and performs at all UMass Amherst home football games, both on the field at halftime and with its traditional “fifth quarter” show after the game.

The 129th Rose Parade in January provided the largest audience in the history of the band, which had already performed to crowds at the 2013 Macy’s Thanksgiving Day Parade in New York City and the 2010 Lord Mayor of Dublin’s News Year’s Day Parade in Ireland.

In 1998, the Minuteman Marching Band was awarded the most prestigious honor bestowed upon college bands, the Louis C. Sudler Trophy.