New report details the challenges households have been facing due to the COVID-19 crisis, the socio-economic fallout and the strategies adopted to address these challenges

AMHERST, Mass. – The results of a new survey published today detail the impact the COVID-19 pandemic has had on Vermont households, including disruptions in school and child care, inequitable divisions of household labor, increases in depression, anxiety and substance use and economic concerns.

Approximately one-third of Vermonters surveyed reported negative financial impacts from the pandemic, with 34% saying they saw decreases in their overall income, 31% indicating they had reduced savings and 32% noting an increase in household spending to meet essential needs. Fifty-two percent of respondents stated that their income has remained roughly the same during the pandemic, while roughly 13% of respondents saw an increase in overall income. One in 5 respondents stated they are financially dependent on their partner and 8% said they have relied on family or community members for financial support during the COVID-19 pandemic.

The researchers, led by Marta Vicarelli, assistant professor of economics and public policy at UMass Amherst, note that their findings are likely to underestimate the magnitude of socio-Marta Vicarellieconomic impacts of the COVID-19 pandemic on Vermont households, as the survey respondents’ average income is higher than the Vermont Census average income. Because of their higher income level, households in the survey have likely had access to more financial resources than most Vermonters, they note. 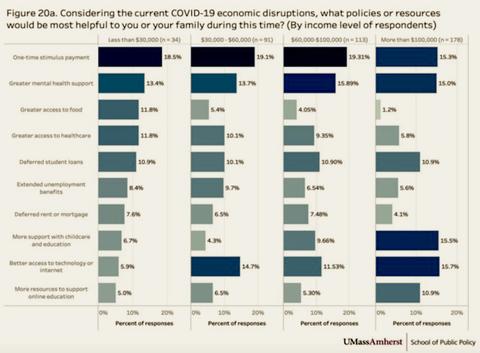 The survey data also shows the incidence of mental health concerns were inversely proportional to income – 21% of respondents from households making less than $30,000/year reported severe anxiety and depression, with each successive income bracket reporting lower anxiety and depression scores.

“Young age and low income seem to be important factors related to mental health conditions exacerbated by the pandemic,” Vicarelli says. “Hopefully our results will contribute to encouraging societal action and the development of policies and programs to support children and young adults.”

“We saw this play out in both state and national employment statistics where women’s workforce participation fell back to 1980’s levels,” said Cary Brown, executive director of the Vermont Commission on Women. “A generation’s worth of progress has been undone. Nationally, women left the workforce at four times the rate of men, including 1.5 million moms of school-aged children nationwide.”

The impacts of pandemic disruptions on children’s academic progress and emotional development were strong areas of concern for parents. More than 50% of parents with elementary-school aged children or older reported being quite-to-extremely concerned about their academic progress, and the majority of parents were concerned with children’s social-emotional development.

“The survey results reinforce what we know: the pandemic has exacerbated existing gender and economic inequality,” said Jessica Nordhaus, director of Change The Story VT – an initiative of the Vermont Commission on Women, Vermont Women’s Fund and Vermont Works for Women – who helped distribute the survey in Vermont. “Responding to these needs improves the lives, livelihood and well-being of women, their families and our economy. In our current joint campaign with Let’s Grow Kids – #MakeWorkWorkForUs -- we are sharing Vermonters’ stories about the need for affordable, quality child care, paid family and medical leave, pay equity, and health care.”

“Our survey was disseminated at the national level, in all U.S. states,” Vicarelli says. “We are currently finalizing our analyses in preparation for our upcoming national report, which will allow comparison of outcomes across states, and we will also publish a third report with a focus only on Massachusetts.”

The complete report, “Impacts of COVID-19 on Vermont Households: a Survey Analysis,” is available online from the Vermont Commission on Women.