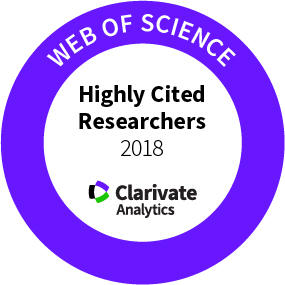 AMHERST, Mass. – Twelve researchers at the University of Massachusetts Amherst have been recognized for being among the world’s most highly cited researchers in 2018.

The analysis by Philadelphia-based Clarivate Analytics, owner of Web of Science, serves as the basis for regular listings of researchers whose citation records put them in the top 1 percent by citations for their field and year.

These scientists are judged to be “influential,” and their citation records are seen as “a mark of exceptional impact,” the company says. This year’s list from UMass Amherst includes five more than the seven named in 2017. Placement on the list has been recognized as a significant achievement for those named, Clarivate says.

Now in its fifth year, the citation analysis identifies influential researchers as determined by their peers around the world. They have consistently won recognition in the form of high citation counts over a decade.

Annette Thomas, CEO of the Clarivate Analytics scientific and academic research group, warmly congratulated the researchers on their appearance in this year’s list. She said, “Congratulations to your distinguished group of researchers. The advancement of scientific endeavor represents a critical activity for individual research institutions and entire nations. The Highly Cited Researchers 2018 list helps to identify the researchers who are having the greatest impact on the research community as measured by the rate at which their work is being cited by others and that contributes so greatly to extending the frontier and gaining knowledge and innovations for society – contributions that make the world healthier, safer, richer and more sustainable.”