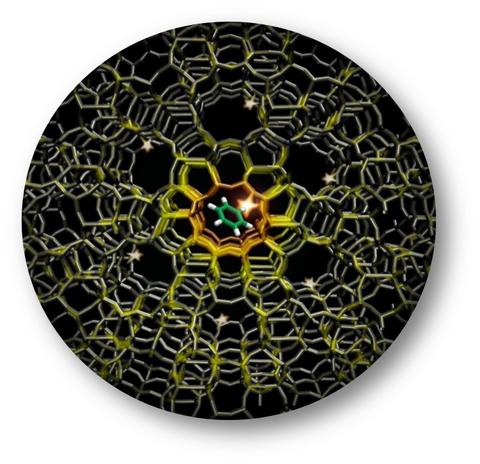 AMHERST, Mass. – Zeolites crystals, used among other things for refining petroleum to gasoline and biomass into biofuels, are the most-used catalysts by weight on the planet, and discovering mechanisms of how they form has been of intense interest to the chemical industry and related researchers, say chemist Scott Auerbach and colleagues at the University of Massachusetts Amherst. They hope their advance on a new way to understand zeolite structure and vibrations leads to new, tailor-made zeolites for use in sophisticated new applications.

Their cover storyin a recent issue of the Journal of the American Chemical Society describes how the team used systematic analyses and a technique called Raman spectroscopy, plus quantum mechanical modeling, to discover new nano-scale building blocks they call “tricyclic bridges,” to help explain zeolites’ porous structures and their dynamical behaviors.

Auerbach says, “This breakthrough is important because it gives us a way to see the invisible – the precise structures that lead to zeolite crystals. We hope such structural insights will help us to synthesize new, tailor-made zeolites for advanced applications in clean energy and carbon capture.” His co-authors include chemical engineer Wei Fan and first author Tongkun Wang at UMass Amherst, with others at Worcester Polytechnic Institute.

The authors say that by replacing previous “overly simplistic” approaches, their methods can “enhance our ability to use Raman spectroscopy as an analytical tool for investigating zeolite structure and formation, using the concept of tricyclic bridges.”

In this work supported by the U.S. Department of Energy Division of Materials Science and Engineering, Auerbach and colleagues say that revealing zeolite synthesis is complicated by the fact that precursor structures are mid-sized, so they fall into a nano-scale “blind spot” – too large for atomic-level and functional group structural analyses and too disordered for X-ray analyses. By contrast, Raman spectroscopy “has emerged as a powerful tool for probing medium-range structures in a variety of materials,” they note.

Fan explains that until now, experimental studies on the synthesis of zeolites with new structures and compositions were based on trial-and-error methods, and characterizing the process posed a “tantalizing challenge.” Their contribution based on tricyclic bridges provides a new tool for understanding the crystallization pathway, opening the door to designing materials for advanced applications in catalysis and separations, they state.

Further, they point out that “it is often assumed with little evidence that Raman bands can be assigned to individual zeolite rings.” They tested this assumption and found that tricyclic bridges ­– collections of three zeolite rings connected together – play a critical role in zeolite formation. Using this, they discovered a precise relationship between zeolite bond angle and Raman frequency that can be used to pinpoint structures that form during zeolite crystallization.

In future work, Auerbach, Fan and their team plan to measure and model Raman spectra during the zeolite crystallization process, to determine which tricyclic bridges are present and will become inherited by the resulting zeolites.