Poll also finds Democrats holding a narrow edge in House and Senate races heading into midterm elections, and a plurality views the Supreme Court as too partisan

The poll of 1,000 respondents found majority support for reforms including automatically registering voters (52%), making Election Day a national holiday (58%) and making vote-by-mail a permanent option to all registered voters (54%), all within three points of the results of a similar UMass Poll conducted in April. Sixty percent of respondents also support restoring voting rights to convicted felons who have served their sentences, identical to the response in April’s poll. 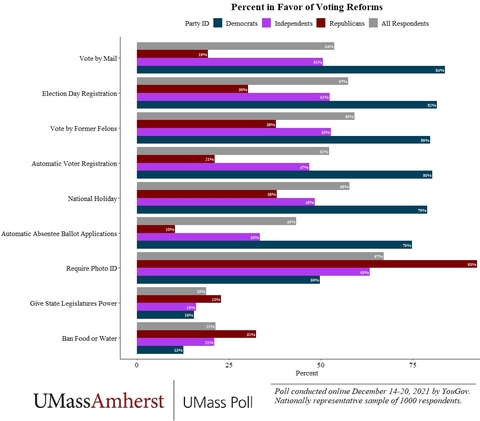 Women outpace men in support of each reform by approximately 10 points, and while a minimum of three-quarters of Democrats support each reform, Republican support for any of the reforms tops out at 38%.

“Why are Democrats willing to end the filibuster to pass reforms intended to protect Americans’ right to vote? The likely answer is that these policies, with the exception of Republicans, conservatives and Trump voters, are popular across demographic groups in the U.S. and most particularly with young people, liberals and people of color – the base of the Democratic Party,” says Tatishe Nteta, associate professor of political science at UMass Amherst and director of the poll.

Also equaling April’s results is the 67% of respondents who favor requiring voter ID at polling stations. Ninety-three percent of Republicans support voter ID laws, as do half of all Democrats, 63% of independents and 60% of African American respondents.

“The issue of voter identification remains a popular reform of the nation’s voting laws, even among young people, people of color, and working class Americans, the groups purportedly most negatively affected by this change in the manner in which Americans vote,” Nteta says.

Seventy-two percent of African Americans said they believe political leaders don’t want people like them to vote and 70% said they believe political leaders make voting more difficult for them than it needs to be in order to take power from them and give it to other people in society. Two-thirds of African Americans (66%) said such efforts to make it harder for them to vote violate their constitutional rights.

“For all that we’ve heard about fears about voter fraud, there hasn’t been nearly enough attention to Americans’ concerns about voter suppression,” says Jesse Rhodes, professor of political science at UMass Amherst and associate director of the poll. Our findings suggest that broad swaths of the population perceive that some political leaders are trying to limit their access to the ballot for political purposes. This is a troubling finding that suggests that efforts to limit ballot access in the name of ‘electoral integrity’ may be inducing considerable cynicism in the American public.”

For the first time, the poll also asked whether respondents would like to make it easier for state legislatures to change election results if they believe there were problems, and respondents thoroughly rejected the proposal by a 61-19 margin.

“A particularly notable case of partisan agreement on election reform has to do with the role of state legislatures in elections,” says Alexander Theodoridis, associate professor of political science at UMass Amherst and associate director of the poll. “Majorities of Democrats, Republicans and independents oppose making it easier for state legislatures to change election results if they believe there were problems. While Republicans have passed and proposed such reforms in several states, this sort of issue is less understandable and, thus, less salient to most voters. Given what we know about public opinion formation, we would expect Republican voters to shift toward favoring intervention by state legislators as it is made clear to them that this is the GOP position. Still, our polling shows that, at first blush, most Americans think it is a bad idea for state legislatures to insert themselves into elections and election administration.”

Looking ahead to the 2022 midterm and 2024 presidential elections

The poll also asked respondents about their views looking ahead to the 2022 midterm and 2024 presidential elections. Among registered voters, generic Democratic congressional candidates hold a two-point advantage over Republican candidates in advance of the midterms, 42-40, with 17% undecided, and a three-point edge (43-40) with 18% undecided in Senate races in states with seats up for grabs in ’22.

Eyeing 2024, President Joe Biden was the first choice of the plurality (40%) of Democratic voters, while Sen. Bernie Sanders was the top choice of 18% and the second choice of 13% of Democrats. Vice President Kamala Harris (10%) Sen. Elizabeth Warren (10%) and Transportation Secretary Pete Buttigieg (9%) round out Democrats’ top-five choices. When the poll offered a ranked-choice option, Harris was the second choice of one-quarter of the Democratic respondents.

Former President Donald Trump still dominates the GOP ticket as the preferred candidate of 55% of Republicans for 2024. Florida Gov. Ron DeSantis is the only other potential 2024 candidate who drew double-digit support, as 20% of respondents named him their top choice for the race to the White House. DeSantis was also the top second choice, as 37% named him their second choice for the party’s nomination, while Trump was the second choice of only 13% of Republicans surveyed.

“At present, Donald Trump remains the clear favorite among Republicans for the 2024 presidential nomination,” Rhodes says. “However, Ron DeSantis enjoys considerable support, and may well give Trump a run for the nomination, especially given how much baggage Trump carries with moderates, independents and swing voters.”

“Despite Trump being limited to one more term as president and being a two-time popular vote loser, the majority of the Republican electorate seems to favor him being the GOP standard bearer in 2024,” Theodoridis says. “More than half list him as their first choice and three out of four Republicans have him in their top three. There is every reason to believe Trump’s decision to run or not will dictate the shape of the Republican field heading into 2024.” 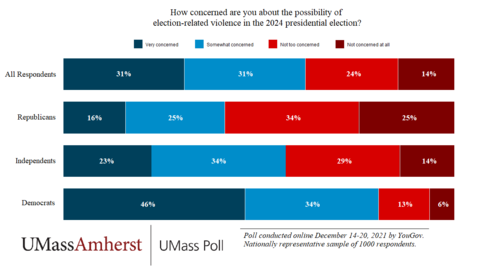 Nearly two-thirds (62%) of all respondents of the poll expressed concern about the possibility of violence in the 2024 presidential election.

“The events at the U.S. Capitol on Jan. 6 have a lingering sting on many voters,” says Raymond La Raja, professor of political science at UMass Amherst and associate director of the poll. “Three-in-five fear the possibility of election-related violence, with Democrats twice as likely to be concerned as Republicans.”

Partisanship in the Supreme Court and state, local governments

Finally, the poll asked respondents their views of partisanship among select government institutions. Nearly half (48%) of all surveyed said the Supreme Court is too partisan, with 39% saying the highest court in the land is not partisan at all. Thirteen percent said the court isn’t partisan enough.

“Although conflict between the president and Congress over Supreme Court appointments likely contributes to this perception, the problem is in large part of the court’s own making,” Rhodes says. “In recent years, the court has taken sides in partisan disputes, and has also repeatedly departed from its own precedents. It will be hard for the court to rebuild its reputation for unbiased assessment.”

“Justice Sonia Sotomayor in oral arguments warned that the ‘stench’ of the court’s impending decisions on the issue of abortion could challenge the court’s legitimacy and the justices’ perceived status as an impartial judges of the Constitution,” Nteta says. “With a plurality – and nearly a majority – of Americans expressing the view that the court in its present form is already ‘too partisan’ it may already be too late to save the court’s reputation.”

“For all the consternation, anger and despair expressed at election officials in the wake of the results of the 2020 election, a majority of Americans view their local and state election officials as ‘not partisan at all,’” Nteta says.

This University of Massachusetts Amherst Poll of 1,000 respondents nationwide was conducted by YouGov Dec. 14-20. YouGov interviewed 1036 total respondents who were then matched down to a sample of 1,000 to produce the final dataset. The respondents were matched to a sampling frame on gender, age, race and education. The frame was constructed by stratified sampling from the full 2019 American Community Survey (ACS) one-year sample with selection within strata by weighted sampling with replacements, using the person weights on the public use file.

The margin of error within this poll is 3.1%.

Topline results and crosstabs for the poll can be found at www.umass.edu/poll