The total fee payments to lenders by the U.S. Treasury may have instead been used to preserve 2.1 million jobs, researchers find 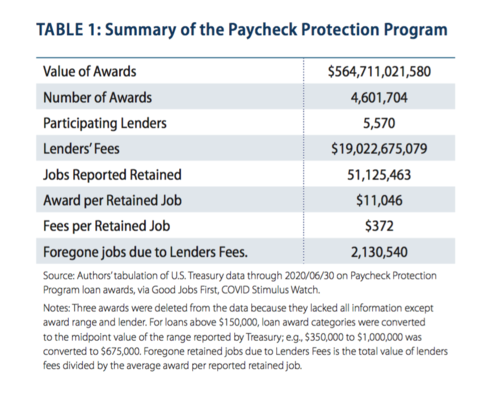 A new research brief published by the University of Massachusetts Amherst Political Economy Research Institute has found that through the end of June the American banking sector has collected approximately $19 billion in fees simply for processing Small Business Paycheck Protection Program loans as part of the CARES Act in response to the economic toll of the COVID-19 pandemic.

“Using data from COVID Stimulus Watch and accounting for the variation in the lender’s fee by loan size, a reasonable estimate of the total bank haul on the $565 billion disbursed in PPP awards as of June 30 is $19 billion,” the report’s authors say, describing the outcome as a “tidy profit for zero-risk lending.”

“There was a better way to protect paychecks for lower and middle income Americans,” lead author Michael Ash, professor of economics and public policy at UMass Amherst, says of the PPP. “The Economic Impact Payments (roughly $1,200 per person) and the Federal Pandemic Unemployment Compensation (including the approximately $600/week) benefit did much more to keep American households and the U.S. economy afloat. The PPP was wastefully administered with minimal accountability, and as we document a substantial share was swallowed by the banking sector in exchange for little more than signing checks.”

The $2.6 billion that lenders explicitly received in the form of PPP loan awards would have placed the industry 41st among the 101 economic sectors that received funds, but when the processing fees for the $521 billion program are included in its total the banking industry leaps to the sixth most supported sector. The industry’s net haul of $21.6 billion places it behind only professional services, doctors’ offices and clinics, building trades, food services and drinking places, and administrative services in terms of total PPP support, and well ahead of educational services, nursing homes and social service nonprofits.

“Caught out on the optics of the nation's two largest banks taking in more than $2 billion in this small-business protection program, JP Morgan Chase and Bank of America committed to donate their fees after expenses.  But ‘expenses’ are always ambiguous – it’s a far cry from committing to simply donate the fees, and there is no accountability for these pledges. And other lenders, who in total received something like $20 billion from this program for small business, made no such pledge.”

Further, the researchers report that the fees collected by the banks may have had a direct impact on the total number of jobs the program was created to save.

“The stated goal of the PPP was to encourage worker retention,” they write, “and businesses were required to report the number of jobs preserved by the PPP loan as part of the application. Taking the businesses at their word regarding jobs retained, we compute the number of additional jobs that the banks’ share of PPP – for doing nothing – could have retained elsewhere in the economy. For instance, JP Morgan Chase, the top lender of PPP loans, made 269,085 awards disbursing a total of $31.9 billion which preserved 2,760,000 jobs and earned JP Morgan Chase an estimated $1.1 billion in fees. If the U.S. Treasury funds paid as fees to JP Morgan Chase had been instead disbursed as PPP loans, roughly 123,000 more jobs would have been saved. Overall, the payments to lenders equate to foregoing the retention of around 2.1 million jobs.”

“The banks’ ample share of the Paycheck Protection Program continues a pattern of handouts for Wall Street in the name of protecting Main Street,” Ash says. “Finance gets to be dealt in on every important public intervention. The amount in this case is not enormous compared to the bailout following the Great Financial Crisis but the requirement of saving a slice for Wall Street puts public resources exactly where they are least needed.”

The complete research brief, “The Bank’s Take on the Paycheck Protection Program,” is available online at www.peri.umass.edu.