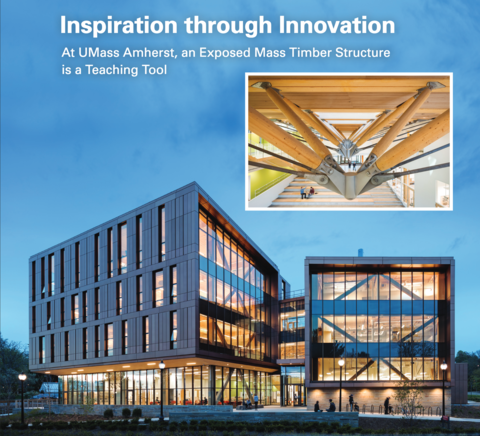 A new case study of the design and construction of the John W. Olver Design Building has been published by WoodWorks, a wood industry group that includes major North American wood associations, government agencies and others.

Written for “anyone interested in the expanding possibilities of mass timber,” the study examines key elements of the building’s planning, design, code approvals and construction with an emphasis on its advanced wood structural systems.

The 12-page study is available as a PDF online here.

The 87,000-square-foot building, which opened in April, is the most technologically advanced cross-laminated timber (CLT) building in the country and one of just two in North America using CLT for wind and seismic resistance. The other is in British Columbia.

Wrapped in an envelope of copper-colored anodized aluminum, the facility saves the equivalent of more than 2,300 metric tons of carbon when compared to a traditional energy-intensive steel and concrete building and is a showcase for sustainability.

Olver’s role in the project is also discussed in the study. In the spring of 2014, he attended a talk by Peggi L. Clouston, associate professor of environmental conservation, where she outlined how wood building construction was making a comeback in Europe. Olver was interested in the new technology and familiar with ways it could help the local economy from his years promoting economic development as a lawmaker. After studying designs provided by Clouston, he began working to persuade campus officials to adopt the new and innovative technology for the proposed Design Building.

Olver also secured additional state funding based on the fact that the building would be an important demonstration project for mass timber in the region.

The interdisciplinary building is home to three academic units: architecture; building and construction technology; and landscape architecture and regional planning.

The Wall Street Journal named it one of the best new buildings of 2017, and it was honored with an Award of Merit in the Engineering News-Record (ENR) list of New England’s 2017 Best Projects in the Higher Education / Research category.

In addition, it is in the running for “Building of the Year” in a public online poll underway on the American-Architects website.

Voters choose from the buildings of the week that were selected during 2017. To vote, got to https://www.american-architects.com/en/building-of-the-year

Click the “Vote” button on your favorite project, then enter your name and email address. Voting ends Jan. 31.

The most popular project will be presented in American-Architects eMagazine #6|18 and on the  website on Feb. 5.