In a First, Researchers Design Robots that Don’t Need Electricity

Scientists at the Department of Energy’s Lawrence Berkeley National Laboratory (Berkeley Lab) and the University of Massachusetts at Amherst recently announced that they have overcome a major hurdle in robotics: how to create robots that can work without any electrical input.

The research, which appears in Nature Chemistry, is the first to unveil a self-powered, “water-walking” aqueous robot that runs continuously without electricity. These liquid robots that are like tiny submarines, which dive below the surface to retrieve precious chemicals, and then resurface to deliver chemicals “ashore.” And they can do this over and over, without ever needing to recharge.

“We have broken a barrier in designing a liquid robotic system that can operate autonomously by using chemistry to control an object’s buoyancy,” said senior author Tom Russell, a visiting faculty scientist and professor of polymer science and engineering from the University of Massachusetts who leads the Adaptive Interfacial Assemblies Towards Structuring Liquids program in Berkeley Lab’s Materials Sciences Division.

Russell said that the technology significantly advances a family of robotic devices called “liquibots.” In previous studies, other researchers demonstrated liquibots that autonomously perform a task, but just once; and some liquibots can perform a task continuously, but need electricity to keep on running. In contrast, “we don’t have to provide electrical energy because our liquibots get their power or ‘food’ chemically from the surrounding media,” Russell explained.

Through a series of experiments in Berkeley Lab’s Materials Sciences Division, Russell and first author Ganhua Xie, learned that “feeding” the liquibots salt makes the liquibots heavier or denser than the liquid solution surrounding them.

Additional experiments by co-investigators Paul Ashby and Brett Helms at Berkeley Lab’s Molecular Foundry revealed how the liquibots transport chemicals back and forth.

Because they are denser than the solution, the liquibots – which look like little open sacks, and are just 2 millimeters in diameter – cluster in the middle of the solution where they fill up with select chemicals. This triggers a reaction that generates oxygen bubbles, which like little balloons lift the liquibot up to the surface.

Another reaction pulls the liquibots to the rim of a container, where they “land” and offload their cargo.

The liquibots go back and forth, like the pendulum of a clock, and can run continuously as long as there is “food” in the system.

Depending on their formulation, an array of liquibots could carry out different tasks simultaneously. For example, some liquibots could detect different types of gas in the environment, while others react to specific types of chemicals. The technology may also enable autonomous, continuous robotic systems that screen small chemical samples for clinical applications, or drug discovery and drug synthesis applications.

Russell and Xie next plan to investigate how to scale up the technology for larger systems, and explore how it would work on solid surfaces. 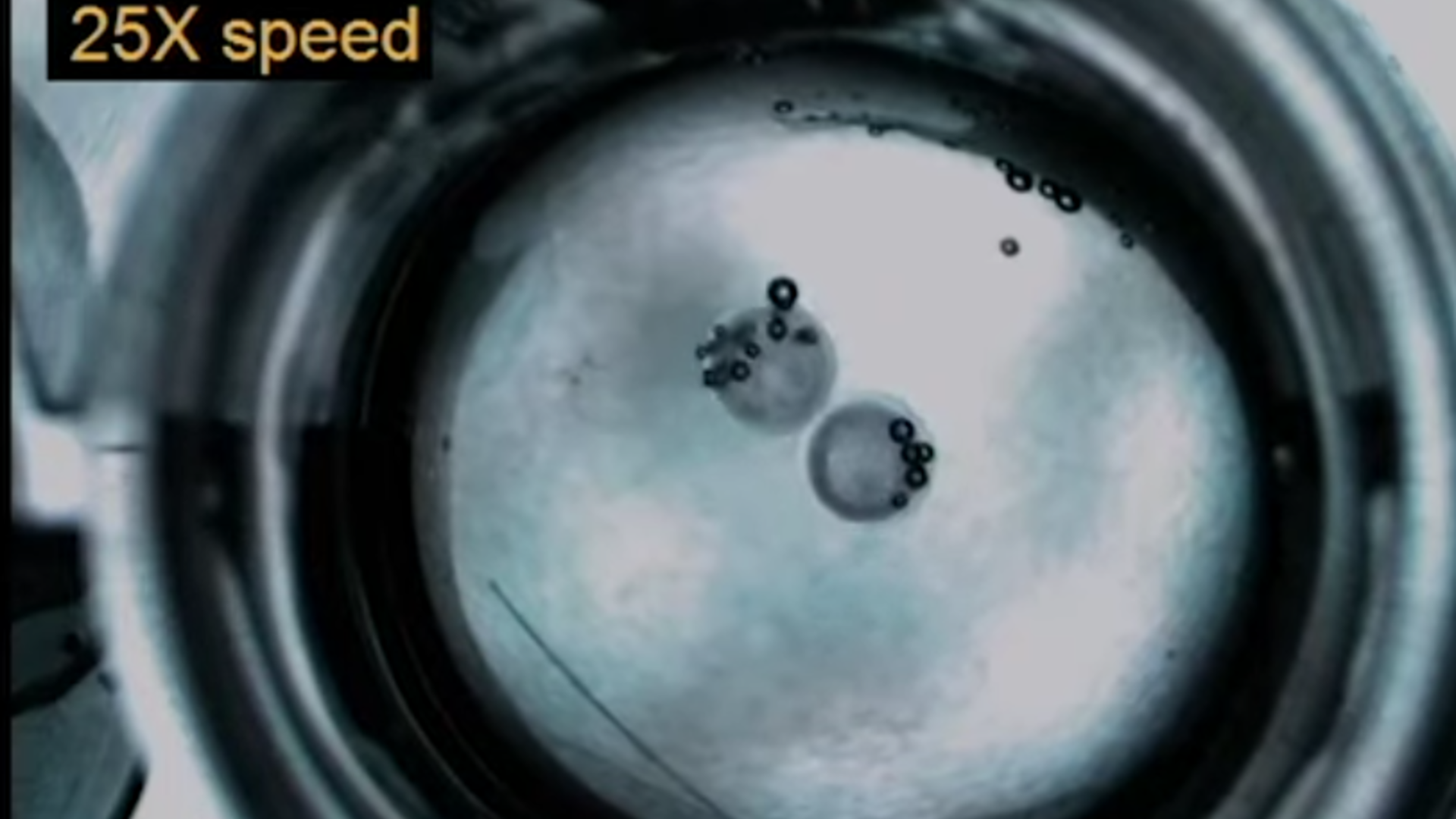 These Liquid Robots Keep On Running