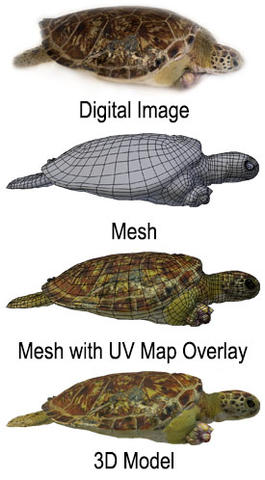 AMHERST, Mass. – The Digital Life team at the University of Massachusetts Amherst, creators of an online catalog of high-resolution, full-color 3D models of living organisms, announce today that they have released two new, online full-color animated models of a loggerhead and a green sea turtle through a collaboration with sea turtle rescue and research institutions.

The Digital Life team, with volunteer 3D artists Jer Bot and Johnson Martin created the animated sea turtles using software such as Capturing Reality and Blender and a process called photogrammetry, in which multiple still photos are integrated to create lifelike 3D meshes with photographic colors.

Irschick, co-founder and director of the Digital Life project, says, “The value of these models is substantial, and includes both scientific and educational uses. To our knowledge it’s the first time that 3D models of live sea turtles have been created from live animals.”

Photographer Shepard adds, “The models can be downloaded and 3D printed, such as for classroom use. These models can be used by scientists in a computer modeling environment for testing models of migration in sea turtles, or to test different net designs to avoid trapping sea turtles. They can also be used in VR or game-like educational environments, and are available at no cost to educators, scientists, conservationists and others for creative or nonprofit use on the Digital Life website.”

The animators spent hundreds of hours animating the 3D turtle models in a format that may be used for VR, film or game applications, among others, Irschick says. Bot, who animated a subadult green sea turtle from LMC nicknamed Scallywag, says he was immediately drawn into the animal’s intricacies.

Scallywag was found missing one front flipper and floating in the water at Blowing Rocks Preserve after suffering from an apparent shark attack. Bot says, “Creating the animal with all its scars was an artistic and technical challenge, but we feel that we were able to reproduce this animal faithfully.”

The other sea turtle modeled so far for Digital Life is Shelly, an adult loggerhead recovered from a power plant by the Inwater research group. Irschick says the artists consulted closely with veterinarian Dr. Charles Manire from LMC and sea turtle biologist Jeanette Wyneken to accurately reconstruct the body shape and limb movements during swimming. Eventually, he adds, he and his team hope to make animated 3D models of all seven sea turtle species in the coming year, adding the leatherback, hawksbill, Kemp’s ridley, olive ridley and flatback.

LMC is a nonprofit sea turtle hospital that promotes conservation of ocean ecosystems with a focus on threatened and endangered sea turtles. In addition to its hospital, it has a research laboratory, educational exhibits and aquariums. All marine turtle images acquired in Florida for this work were obtained with the approval of the U.S. Fish and Wildlife Service and the Florida Fish and Wildlife Conservation Commission (FWC) under conditions not harmful to marine turtles, while conducting authorized conservation activities pursuant to FWC MTP-17-086 or MTP-17-125, the researchers state.