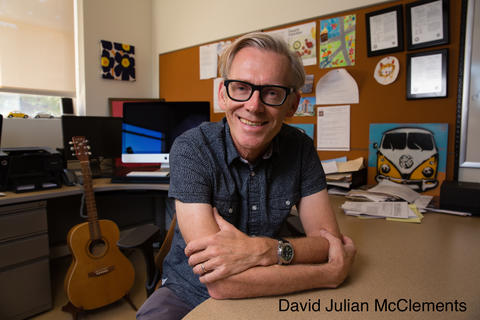 AMHERST, Mass. – David Julian McClements, Distinguished Professor of Food Science at the University of Massachusetts Amherst and among the world’s most highly cited researchers, has written a new book that explores the brave new world of science and food.

For the first time, the acclaimed researcher and academic author has geared a book about food science toward a general audience, encouraged by his teenage daughter, who did research in his lab on plant-based foods as a high school student and is heading to Vassar College in the fall.

“There are so many exciting things going on in the food science area,” McClements says. “We’re in the midst of an unprecedented era of rapid scientific and technological advances that are transforming the way our foods are produced and consumed.”

In “Future Foods: How Modern Science Is Transforming the Way We Eat” (Springer Nature, 2019), McClements poses and explores an array of science-meets-food questions, such as: What is food architecture? It’s the use of architectural and design principles to construct healthier, tastier and more sustainable foods. Will we all one day have 3-D food printers in our homes? Yes, and they are already available. Should nanotechnology and gene editing be used to enhance our foods? It’s a very complicated area, but McClements concludes we need to harness new technology to feed the world and sustain the planet. What’s the best way to customize your diet for better health? Hint: one size does not fit all.

The book discusses efforts to create functional foods, which are fortified with nutraceuticals or probiotics to address malnutrition in developing countries and combat chronic disease, such as cancer, diabetes and obesity. While he stresses the need for consuming more fruits, vegetables and other fresh foods, McClements points out that this is not “practical” for everybody on Earth, not to mention in space. McClements and fellow food scientists at UMass Amherst are working with NASA to design functional foods for astronauts on a would-be mission to Mars.

“What we really need are processed foods that are affordable and convenient but also healthy and tasty,” McClements writes.

The book’s tone is conversational and lively, and McClements shares personal anecdotes of his and his family’s explorations with new foods. In Scotland, his nephew Jake conducted an informal taste-test of a bag of crunchy edible insects, illustrated with a photograph of him about to rip into a slice of pizza topped with barbecue-flavored crickets. In South Beach, McClements is seen biting into his first plant-based Impossible Burger and reflecting on its meat-like appearance, flavor and mouthfeel.

A vegetarian for the past few years, McClements emphasizes the importance of creating a “more ethical and sustainable edible future” and provides historical context about the world’s food consumption, production and needs.

Meat-alternative products like the Impossible Burger are becoming more available and even delicious, and McClements explains that “clean meat” and “bug meat” are not far behind. Clean meat, also called cultured meat, is created from the living cells of animals that are grown in test tubes or fermentation vats (like beer), using advanced biomedical technology. “You actually get meat,” McClements says, “without any animal being killed.”

In “Future Foods,” McClements originally set out to answer a personal question and a global quandary: “What should my family and I eat? How should we feed the growing world population?” In the end, McClements discovered that the meat of the book “was really about complexity, uncertainty, and compromise.”

He writes in the final chapter, “My journey through the future of foods has been both an enlightening and humbling experience.”