A mini film series organized by the DEFA Film Library will be one of the special features at “Bertolt Brecht’s Paper War,” which will take place at the Robert Frost Library at Amherst College,  from Thursday, Sept. 29 to Wednesday, Nov. 2. 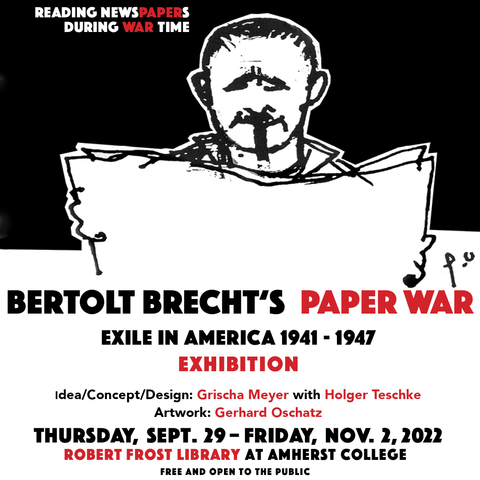 The film series, which is available for free on DEFA’s Vimeo streaming platform, includes Andrea Simon’s short film “Salka Viertel, Every Sunday.” The film is about the history and importance of Salka Viertel’s salon in Hollywood, where many German artists, including Bertolt Brecht, who had fled Germany after Nazis took power, met.

In “A Legacy,” the director remembers a 1956 encounter with Bertolt Brecht, when he, a young assistant to Brecht at the time, was sent to the playwright’s house to pick up a Hitler photo clipping. Instead of only handing over the photo, Brecht showed him a journal that he had prepared in American exile. The selected clippings were Brecht’s personal reflection on Hitler, the Nazis and the world in times of war. The English subtitles for this film were created by German and Scandinavian studies graduate student Ester González Martín and supported by the Rosa Luxemburg Stiftung New York Office.