AMHERST, Mass. – A twelve-billion-year-old mystery from the early universe; the paradox of a consistently recurring supernova; the unknown process governing how stars grow: these are among the topics recently explored in a remarkable series of papers coming out of UMass Amherst’s astronomy department, all of which appear in the “Nature” family of journals—among the most prestigious academic journals in the world.

“The results published in these three papers address fundamental questions in Astronomy, from understanding the evolution of stars and galaxies at the dawn of the Universe to unraveling how stars, and possibly planets, grow in our cosmic `backyard,’” says Daniela Calzetti, astronomy department head. “This trifecta of ‘Nature’ papers is both thrilling and amazing.”

Why did the growth of some early galaxies stall?

A short time after the Big Bang occurred, 14 billion years ago, some of the most massive galaxies in our universe mysteriously stopped producing new stars. “For some reason,” says Kate Whitaker, professor of astronomy and lead author of a new paper recently published in ‘Nature,’ “they have shut down. They’re no longer forming new stars.” Astronomers have known that these early, massive galaxies had gone quiescent, but until now, no one knew why.

Using a suite of instruments, including the Hubble Space Telescope and ALMA, the Atacama Large Millimeter/submillimeter Array, Whitaker’s team, which includes Alexandra Pope, professor of astronomy at UMass, and Christina C. Williams, who received her Ph.D. in astronomy at UMass, Whitaker’s team discovered that those early galaxies literally ran out of gas—cold gas, which is what powers galaxy growth.

The galaxies Whitaker’s team studies are 10 – 12 billion light years away, which means that the light that the team observed was emitted 10 – 12 billion years ago. In effect, Whitaker is looking into the deep past of the universe.

The team’s findings mean that, within the first few billion years of the universe’s existence, these galaxies either burned through their energy supplies, or ejected them and, furthermore, that something may be physically blocking each galaxy’s replenishment of cold gas.

Taken together, the research helps us to rewrite the early history of the universe so that we can get a clearer idea of how galaxies evolve.

The paradox of the recurring supernova

As if solving a 12-billion-year-old mystery isn’t enough, Whitaker also recently co-authored a paper in “Nature Astronomy” revealing a paradox: the recurring appearance of a supernova known as Requiem.

When a star explodes, it’s called a supernova, so one might think that there’s only one chance to see the explosion. But, due to an effect called “gravitational lensing,” first predicted by Albert Einstein in his general theory of relativity, light can be bent, split, magnified and distorted by immense gravitational forces.

Supernova Requiem is about 10 billion light years away, and as its light travelled to earth, it passed by an immense cluster of galaxies, whose gravity quartered Requiem’s. The research, led by Steven Rodney of the University of South Carolina in Columbia, predicts that the next viewing of Supernova Requiem will occur in 2037. Though the light will be too faint to see with the naked eye, it should be visible to advanced telescopes.

Revealing how stars are born

It begins with a cloud of dust and gas. Slowly, as gravity works upon the particles, the dust and gas start to cohere, eventually collapsing into a star and an accompanying disc. Next, in a process called magnetospheric accretion, the particles at the inner edge of the disc fall at hundreds of kilometers per second toward the newborn star. When these particles smash into the surface of the star, they produce shockwaves and an enormous amount of heat. A “hot spot” emerges on the surface of the star where the falling particles converge. These hot spots release radiation—which a number of astronomical instruments can perceive.

“We now have a better understanding of how the accretion process works,” says Robinson, whose team focused on a star called GM Aur. “For the first time, we were able to infer the azimuthal structure of the accretion shocks by using multiple telescopes that are sensitive to hot spots with different densities. As the star rotates, these hot spots also rotate in and out of view, which lets us measure the density-distribution of hot spots on the stellar. We already knew that there were low- and high-density hot spots on the surface of the star, but this is the first time that we have been able to map their structure.”

It turns out that up to 20% star’s surface is covered by hot spots of a lower density, and the highest-density regions make up only about 0.1% of the surface. “This is the first empirical proof we have of these azimuthal hot spot gradients on growing stars. It tells us about the young star and the conditions in the inner regions of the protoplanetary discs that will someday grow into solar systems.” 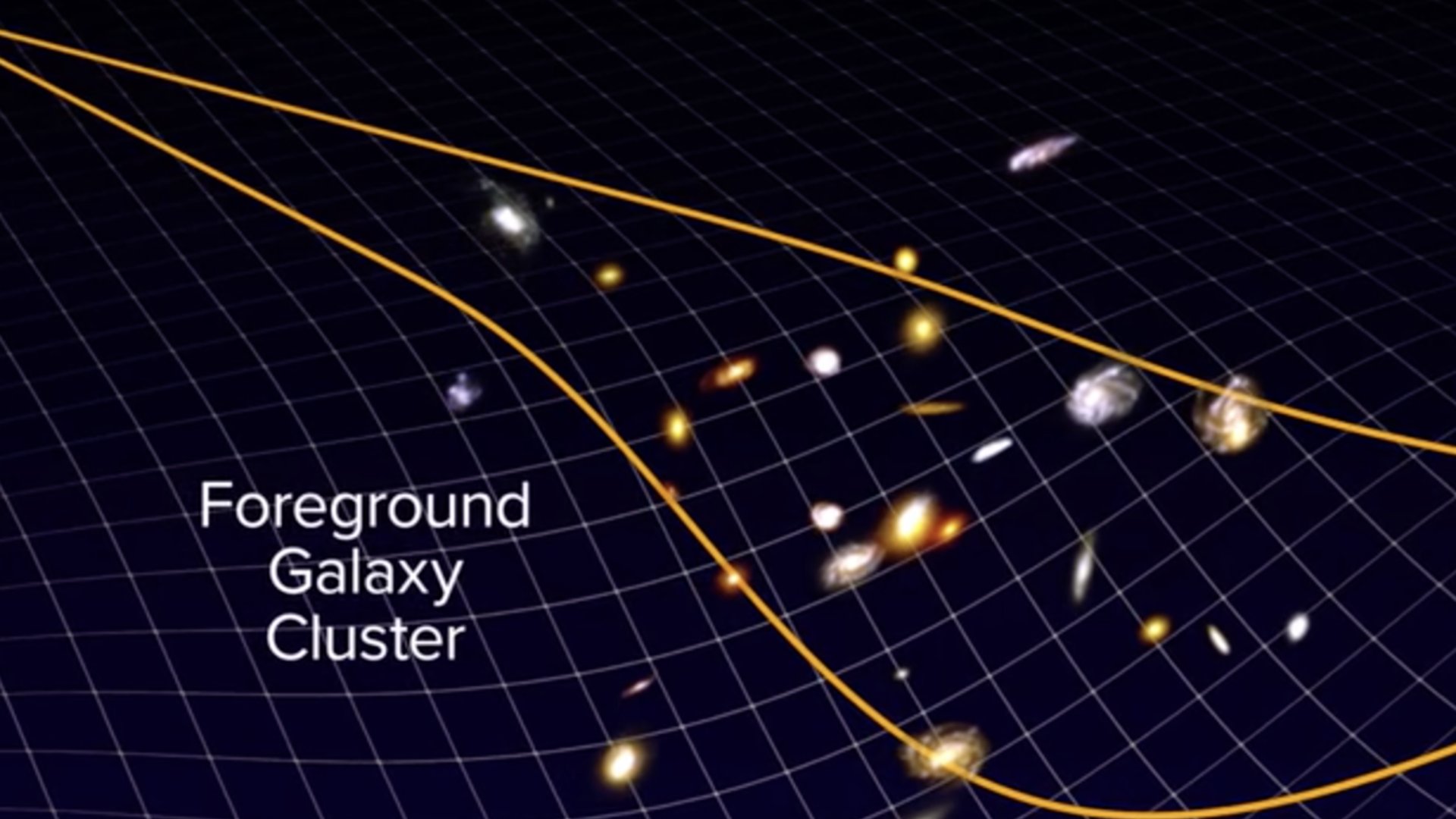 This animation demonstrates how light from Supernova Requiem, which exploded about 10 billion years ago, was split into multiple images by a massive foreground cluster of galaxies.

The supernova's light is travelling billions of light-years toward Earth when it runs into the hefty galaxy cluster. The cluster's powerful gravity warps the fabric of space, represented by the grid. The galactic grouping's gravity magnifies, brightens, and splits the supernova's light into multiple mages, which appeared in a 2016 Hubble Space Telescope snapshot. However, some of the exploded star's light takes a longer path toward Earth. It passes through the cluster's central region, where gravity is the strongest. The combination of gravity's pull and the longer route across space slows down the light, delaying its arrival at Earth by about 16 years. Researchers compare this phenomenon to a train that has descended into a deep valley and is now chugging up a steep hill to get out. That light is predicted to finally reach Earth in 2037.