“This period of structured learning at UMass has reawakened an intellectual passion I had when I was younger and, for many reasons, was unable to fulfill in my youth.” 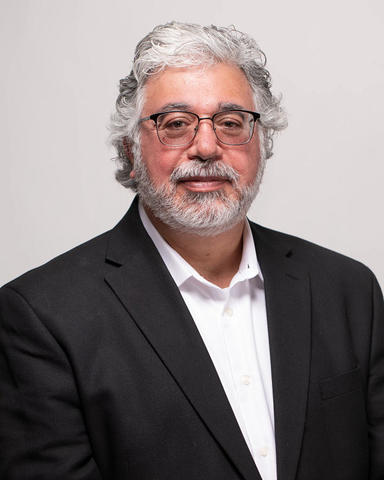 Al Simon jokes that some people earn their undergraduate degree in four years, some in six, but he was on the 44-year plan. He’ll graduate from the University Without Walls in May at age 61.

As the son of French-Canadian millworkers from Somersville, Connecticut, who didn’t complete high school, he was at a disadvantage when he enrolled in college at 17. “My first attempt was a total disaster. I was ashamed of that until I got older and learned about obstacles facing first-generation students,” he says. He tried college again later and did well academically, but life—work, family, a mortgage—got in the way.

His third attempt has gone much better. Al expected it would take up to three years to earn his UWW degree, but the pandemic sped up the process. He stepped away from his work as a consultant for car dealerships and completed his course work in 18 months.

His undergraduate studies gave him the opportunity, while researching a paper for a labor history class, to explore the history of his hometown and of the mills where his family worked and his parents met.  “I discovered a story I had no clue existed, which turned out to be a much bigger story than I anticipated when I began writing,” he says.

Al’s paper relates the fascinating tale of labor activism, including a strike and union busting, at the textile mill in Somersville. The small mill was one of many throughout New England that attracted immigrant workers from such disparate places as Canada, Poland, and Portugal. “This was an industry where workers were exploited before we had modern labor laws,” Al says. “People had to fight for their rights. In this place, in this period of time, they did that.”

Working remotely, he drew on dozens of archival resources, from union records in Wisconsin to the Connecticut census, to examine the role of familial networks, ethnicity, and gender in the mill workers’ unionization effort. He investigated the change in workers tactics from shop floor action to a legal strategy. And he looked into the motives behind the mill owners’ rigid opposition to the union.

He had fun weaving his research into a narrative. Al says. “It’s like being a detective; no single source had the whole story.”

Along the way he uncovered some historical nuggets: “Mike the Polander,” the only Somersville barber, refused to cut the hair of strikebreakers. One female unionist carried a rattrap on the picket line. The 18-year-old arrested for singing derogatory songs to scabs was Al’s uncle, John Simon.

Al’s paper, “New Deal Labor Militancy in a Connecticut Industrial Village: The Somersville Manufacturing Company (1934-1942),” will be published in the spring 2021 edition of the Connecticut History Review.

Al says: “Our history shaped the present and is so much more than the history of great leaders. When you look back these folks are anonymous, but they had lives and they had struggles. People are going to learn about them now and that makes me feel really good.”

Al’s advisor, University Without Walls senior lecturer Jacqueline Castledine, is among many urging him to enroll in graduate school for a master’s degree in history. She says, “Al’s intellectual curiosity, and ability to contextualize historical sources are exceptional for an undergraduate student and lay a foundation to build upon in graduate work.”

He’s considering it. “I feel a responsibility to give voice to people who typically aren’t heard; there’s a lot more of the story to tell,” he says.