Textiles That Harness the Sun's Energy

“In college, things clicked for me. I took the time to find what I like and I learned not to quit when things got hard. When I found my passion, I knew I had to focus.” 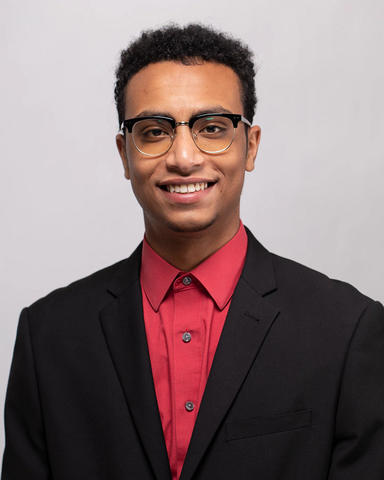 Ali Abdel-Maksoud describes himself as a curious kid, the kind who would take things apart and poke around in an electrical socket. As an intern in the Wearable Electronics Lab of Trisha Andrew, associate professor of chemistry and chemical engineering, he put that curiosity into action.

The Andrew lab makes textiles that can harvest solar energy. These textiles can be used to make wearable electronic garments that can power devices and monitor health and activity. Ali works on fabricating solar cells using soft electronic materials and a technique, known as oxidative chemical vapor deposition, that the lab developed to create electronic polymer films on textiles.

Ali’s curiosity brought him to the lab and secured him a place there. He read an article on the UMass home page about Andrew’s research and, intrigued by the green energy potential of her work, met with her and peppered her questions. After joining the lab, he learned how to perform highly specialized deposition and characterization techniques using the lab’s state-of-the-art equipment. “Every day was me on a playground,” he says. “When I used the glovebox, I felt like an astronaut.”

After training from graduate students David Bilger and Kwang-Won Park, Ali was soon performing his own experiments. “It is rare that a young undergraduate will demonstrate sufficient maturity and technical and experimental mastery to be trusted enough to perform specialized experiments on their own,” says Andrew.

Ali contributed to two published research papers. The first investigated a new method to improve the coating on solar textiles and was published in Organic Electronics. The second, published in Polymer Chemistry, investigates the use of guaiazulene, a natural hydrocarbon dye that comes from such sources as the Australian cypress pine, for green electronics.

“We were told guaiazulene couldn’t be polymerized successfully, but we did it easily and consistently,” Ali says. “We showed that this is a brand new, less expensive, greener polymer material. Essentially, it’s a simple material for harvesting solar energy.”

After two years in Andrew’s lab, Ali’s curiosity is still powered up. “I want to see how Professor Andrew does things so that I can contribute,” he says. “I watch her closely and take notes.” And he’s excited about the potential applications of the lab’s work, including virtual reality garments and t-shirts for older adults equipped with a pressure sensor that could detect falls.

Ali will continue at UMass Amherst to study for a PhD in electrical engineering. He credits his immigrant parents with his transformation from a curious kid with average high school grades to a published researcher. “We came to the US from Egypt when I was nine, and it was a shock for me,” he says. “But my parents’ unwavering faith in me has been my rock and my motivation.”