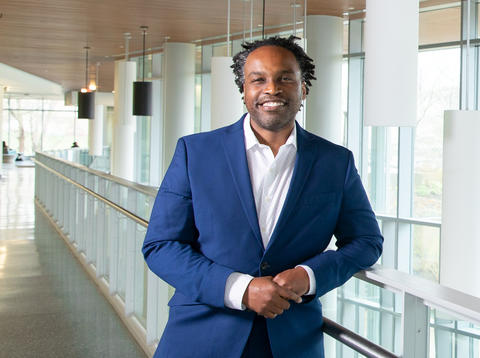 Teaching “Introduction to American Politics” via Zoom from the attic of his home, UMass Amherst Associate Professor of Political Science Tatishe Nteta grabs the attention of more than 150 students as he discusses thought-provoking historical cases that relate to current affairs with his characteristic upbeat energy.

“Someone’s peaceful protest is another person’s terrorism,” he says, contrasting the FBI’s mobilization in response to the Black Lives Matter movement with the lack of preparedness ahead of the January 6 Capitol insurrection. “Get ’em Prof!” writes a student in the class’s chat window.

“When I lecture, I’m not looking for likes,” says Nteta. “I want to challenge students to think about their world in order to improve it. In the United States, there is a lack of understanding of our history regarding race and politics and the consequences of that history. We should talk honestly about these issues. My small contribution to that is my classes. We have to be committed to this project of building the best democracy that we can. I hope my students recognize there is power in this goal and in mobilizing based on the values of our country.”

For his impassioned teaching, his groundbreaking research, and his leadership of the UMass Poll, Nteta, a faculty member since 2007, was recently named a UMass Spotlight Scholar. “It is highly unusual that an outstanding researcher is also a great teacher, but with Professor Nteta we are very fortunate to have someone who is excellent at both,” says Jesse Rhodes, professor and chair of the UMass Amherst department of political science.

Nteta grew up in Middleton, Mass., with a keen appreciation of the power of politics to change people's lives. His father, Christopher Nteta, came to the US from South Africa in 1965 to attend Harvard Divinity School and taught history and African American studies at UMass Boston for 30 years. He was active in the Massachusetts anti-apartheid movement, including pressuring the Polaroid company to stop providing technology to the South African apartheid government. “For many people politics are just a side show, but for others, politics are life and death,” observes Nteta.

Nteta’s wide-ranging research revolves around his conviction that race remains the defining issue of our time. “W.E.B. Du Bois famously said that the problem of the 20th century was the problem of the color line,” Nteta says. “I think that’s true as well for the 21st century. Will the US live up to our ideals of egalitarianism, equality, and liberty? Most people think these ideas connect, but they are often in conflict. I’m interested in recognizing where we are as a country and as a society given the changes since the 1960s.”

An optimist at his core, Nteta believes that the US is inching “ever-closer” to its egalitarian ideal. He asks, “What is the impact on how the public thinks about issues of race and politics as the country shifts demographically and culturally to accept groups that have historically been outsiders? That type of change is revelatory in a country founded on notions of white, male supremacy.”

A look at just a few of the papers published by Nteta and his coauthors in leading political journals in the last five years convey the scope of his work. They include: “Understanding White Polarization in the 2016 Vote for President: The Sobering Role of Racism and Sexism.” This research sheds light on the political success of Donald Trump. Nteta is currently building on this work to examine the 2020 election.

Another paper, “For You Were Strangers in the Land of Egypt: Religious Elites, Public Opinion, and Immigration Reform in the United States,” is part of Nteta’s broader research into attitudes concerning immigration.

The publication “Burying the Hatchet? Elite Influence and White Public Opinion on the Washington Redskins Controversy” and other papers expand understanding of symbolic racism in sports.

In “The First Daughter Effect: The Impact of Fathering First Daughters on Men’s Preferences on Gender Equality Issues,” Nteta has demonstrated that men who have a daughter as a first child express more liberal attitudes.

One of his Nteta’s many ongoing projects with UMass colleagues involves utilizing big data to scour millions of court cases to uncover implicit racial bias by political elites. They plan to extend the search to Congressional records. “We can look at centuries of data in terms of speeches and other rhetoric,” Nteta says. “Levels of implicit racial bias can be indicators of whether or not we are nearing the mountaintop spoken of by Martin Luther King.”

In addition to teaching and research, Nteta serves as director of the UMass Poll, which administers four to six public opinion surveys annually. The poll is a leader in online polling and in asking questions in a bottom-up, open-ended manner. What also sets the UMass Poll apart, Nteta says, is that the operators of the poll are professors first, pollsters second. He says, “We bring not just our academic experience, but our classroom experience to ask questions of importance to Massachusetts.”

In all his work, Nteta focuses on his hopes for a more united and egalitarian America. He says, “There’s more that brings us together than keeps us apart.”

“What’s in a Name? Symbolic Racism, Public Opinion, and the Controversy over the NFL’s Washington Football Team”

According to Daniel Snyder, owner of the National Football League Team formerly known as the Washington “Redskins,” “the name really means honor and respect.” For decades, Snyder pointed to polls that suggest majoritarian support among the American public to justify the continued use of the racially contested team moniker. However, Indigenous activists and their allies have long argued that the term “Redskins” is a racial slur. . . Our findings indicated that support for the continued use of the team’s name, though admittedly widespread among the American public, is in part influenced by negative racial attitudes directed at Native Americans. Rather than “honoring” American Indians, those supportive of Native American mascots and symbols in professional football are significantly likely to begrudge them.