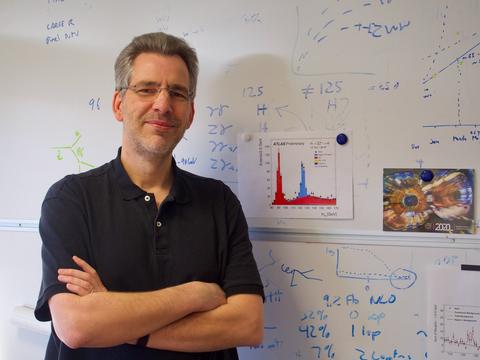 UMass Amherst particle physicist Stephane Willocq has been interested in big-picture science since he was a teenager. Curious about the laws of nature and how they impact what we know about our world, he was drawn to study how things worked on a fundamental level, and how the very small connects with the very large. As the Deputy Physics Coordinator of the ATLAS experiment at CERN (the European Organization for Nuclear Research) in Switzerland, Willocq’s work on the very small leads toward revolutionary breakthroughs in science, the search for new phenomena, and his involvement in the largest physics collaboration in the world.

CERN is home to the Large Hadron Collider, the world’s largest and most powerful particle accelerator. The ATLAS experiment, comprising over 3,000 scientists world-wide, uses the collider to smash high-energy particle beams together at nearly the speed of light. The collisions produce new particles (new forms of matter) whose debris can be recorded and measured.

Willocq studies units of matter inside the atomic nuclei called quarks. “We collide them at nearly the speed of light at the highest possible energies. We are creating new particles that we can study to understand what are the most fundamental constituents of matter. How do they interact? This is very closely tied to how we understand the universe: how it was formed, how it evolved over time and how it ultimately will evolve,” says Willocq.

Willocq has been working on different aspects of the ATLAS experiment full time since 2004. “Initially I was working on primarily developing software to reconstruct the trajectories of particles that are called muons – these muons are basically heavy electrons. They behave very much like an electron would except for the fact that they are about 200 times heavier. They are quite important to the experiment because many of the new phenomena that we are studying or that we are looking for give rise to high energy muons in the detector. They are rather striking signatures in the experiment that very often indicate the presence of some interesting collision,” says Willocq.

The Large Hadron Collider. Image courtesy CERN.Physicists currently have a good theoretical understanding of how fundamental particles interact, says Willocq. Experimental measurements performed by ATLAS contribute to that understanding, but there are pieces of the puzzle that are still not understood. “We know through astro-physical observations that the universe is made up not just of standard matter but also of dark matter. This is the massive matter that does not shine, does not emit electromagnetic radiation. Dark matter is about five times more abundant than regular matter. We know there is a lot more stuff in the universe, but we don’t know what it is,” says Willocq.

Understanding dark matter is one of the motivations for a program at ATLAS of searching for new phenomena, referred to as “physics beyond the standard model.” “This is physics which is not predicted by our current theory but would explain or provide, for example, a particle candidate for dark matter, which is a big puzzle. Understanding the Higgs boson is another aspect of what we are chasing after right now,” says Willocq.

Finding evidence for the Higgs boson in 2012 is the ATLAS experiment’s highest achievement to date. Sometimes referred to as the “God particle,” the Higgs boson is unique in that physicists believe it to be responsible for giving other particles their mass. “This is one of the last missing pieces of the theoretical understanding we have of particle physics,” says Willocq.

The properties of the Higgs boson are what make it interesting, he notes. “Not only is it responsible to give all particles in nature their mass, but it is a particle that has no electric charge, it has no spin, which is an important quantum mechanical property that all particles have, so it is unique in that respect. We know of no other fundamental particle without spin,” he notes. Other fundamental particles either have a spin of one-half like the constituents of matter or a spin of one like the messengers of fundamental interactions (e.g.the photon of electromagnetism). "The Higgs boson is thus in a class of itself," says Willocq.

Finding evidence for the Higgs boson has raised new questions as well. Perhaps the most puzzling aspect, says Willocq, is that it has a much lower mass than what physicists expected based on their current theoretical understanding.

“It is still a very heavy particle, which is why it could not have been discovered in previous experiments. It required a very large particle accelerator to produce collisions at sufficiently high energy to produce it. But nevertheless, theoretical understanding would have predicted the mass to be many orders of magnitude higher than the mass we have discovered it had. This is a huge puzzle in our theoretical understanding because in order to accommodate the relative lightness of the Higgs boson, we need to invoke some new physical principle which is yet unknown. Maybe some new symmetry of nature or some new particles need to be discovered, so we can understand why the Higgs Boson is relatively light,” says Willocq.

Willocq says the purpose of the ATLAS experiment is to prove the current theory of fundamental physics wrong. “We are searching for evidence that supports a new paradigm for the most fundamental physics. That may involve new types of interactions or new symmetry principles. There is this idea of Super-symmetry – to every particle there is a super symmetric partner that differs by a half unit of spin and that’s one of the contender theories to explain why the Higgs boson is so light. It also might explain the existence of dark matter,” says Willocq. Another intriguing possibility is that the Higgs boson itself may provide a portal between known matter particles and a hidden sector of yet-to-be-discovered dark matter particles.

Willocq says other revolutions in our understanding of physics theory may be that the universe has more than three spatial dimensions and one dimension of time. “Physicists are considering that there could be additional dimensions that are not obvious in our daily experience but that could be seen at very small distances by studying these very high energy collisions. All of these would lead to a revolution in our understanding of the laws of nature,” says Willocq.

The ATLAS experiment is in the process of preparing a major upgrade of the detector for the next phase of the accelerator called the High Luminosity Large Hadron Collider. Set to being later in the decade, the project will replace many components of the detector.  Willocq and four other faculty on the UMass Amherst campus ( Brau, Dallapiccola, Coelho Lopes de Sa, and Martinez Outschoorn) are working on components that are critical to the upgrade.

The ATLAS endcap cryostat inserted inside the muon spectrometer. It surrounds the inner tracker, which UMass Amherst scientists are working to upgrade. Image courtesy CERN.“The UMass group is involved in two projects specifically for the upgraded detector. One is the inner tracker and the other is the new muon trigger system. The inner tracker is the component of the detector which is closest to the proton-proton collision point which we use to measure the trajectories of charged particles. It has to be completely replaced in order to handle the factor of ten increase in luminosity of the collider. We are playing a significant role in developing this new inner tracker as well as in the trigger system for muons,” says Willocq.

The recent opening of the campus’s new Physical Sciences Building has helped in these efforts. It’s a big draw for new faculty who are working with Willocq on ATLAS as well as providing state-of-the-art laboratory space to tackle new projects for the detector that are only possible due to the new labs.

“We have accomplished a lot with the experiment in the last 10 years,” says Willocq. “The Higgs boson discovery is an important part but that is not the only thing. We have made a lot of very precise measurements that have tested our theoretical understanding to new levels.  We have done a lot of searches for new phenomena that have strongly constrained the possibilities of what kinds of new theories might be possible. But there are still very many unanswered puzzles to address. That is something we will continue working on for the rest of the experiment which is probably another 15-20 years. We are far from being done.”

In addition to his research, Willocq was elected to several leadership positions on the ATLAS experiment. He was the publications committee chair in 2016-2018, and later in 2020 he will move from Deputy to Lead Physics Coordinator. “We have a big structure of people with different leadership roles for all of the different aspects of the data analysis,” says Willocq. "My job is to make sure all of the components of the project work together, to organize all the data analysis activities, some aspects of the software, and detector simulation work that has to be done so that we can model the response of the detector to known standard model processes and reactions as well as new phenomena.”

Willocq is also a Fellow of the American Physical Society, a distinct honor that recognizes individuals for advances in physics through original research and publication.