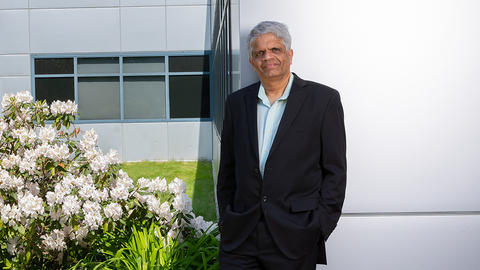 The life’s work of Professor Ramesh Sitaraman of the UMass Amherst College of Information and Computer Sciences was severely tested when COVID-19 drove global internet traffic up by as much as 50 percent. Yet, thanks to the genius and foresight of Sitaraman’s work, worldwide computer networks have remained fast and reliable despite this unprecedented surge, allowing billions of people to work, learn, shop, socialize, and play online.

Sitaraman’s work on networks goes back to the early years when the internet was slow and unreliable. In 1993, he wrote a groundbreaking Princeton University PhD thesis on how to make networks reliable. “When you think about it, the internet is an enormous collection of hundreds of thousands of networks with no central authority,” he says. “It was never something that people envisioned could support trillions of dollars of business or 5 billion users as it does now. That was unimaginable.”

From Princeton, Sitaraman joined the UMass faculty, drawn to one of the nation’s top institutions for computer science. After a few years, he left academia to put theory into practice at Akamai, based in Cambridge, Mass., where he helped pioneer content delivery networks (CDNs). CDNs now form an industry segment valued at tens of billions of dollars, and they carry more than two-thirds of internet traffic. Over the past two decades, CDNs have kept the internet up and running through major world events such as 9/11, natural calamities, malicious attacks by individuals and governments, and now a pandemic.

Sitaraman, who returned to the UMass faculty after a few years, says, “Teaching has always been a passion and a big draw for me to return to academia from industry. I teach algorithms, the scientific core of computing. I teach the old-fashioned way using the Socratic method, where my students and I interactively construct algorithms from scratch using only a chalkboard. Seeing the transformation of my students from computer programmers who can write ad-hoc code to computer scientists who can reason about the correctness and efficiency of their code is very gratifying.”

“I like combining teaching and research,” Sitaraman continues. “Teaching has the most direct impact on the minds of individuals. You can see that you’re making progress with every class that you teach. But, in research, it’s common to think for months about a problem and not feel as if you are getting anywhere. For some people, that’s unnerving, but I like the unknown.”

Sitaraman has been hailed for both his teaching and his research. Last year he received the university’s Distinguished Teaching Award, a highly competitive and prestigious honor and the only student-initiated award on campus. He has won the most selective awards in computer science, including the ACM SIGCOMM Networking Systems Award for his role in creating the Akamai CDN. He was elected as an IEEE Fellow for pioneering contributions to content delivery, internet performance, and distributed systems. In addition, he was elected an ACM Fellow for his contributions to content delivery and scalable internet services. As Professor Charles Weems of the College of Information and Computer Sciences says, “Few have profoundly influenced both the science and engineering practice of the internet the way Ramesh has.”

Sitaraman’s current research focuses on the future challenges of the internet, including sustainability. “The internet uses a lot of energy to run all the world’s servers; it consumes almost the same amount of energy as some midsized countries, and its energy expenditure is growing quickly with internet usage,” he says. “How can we make it more sustainable? Can we shut down part of the internet to save energy when demand is lower? How can we use renewables, such as solar and wind energy, to power the internet?”

Another area of focus for Sitaraman is the future of online videos. “We’re researching a new kind of 3D video system that can provide an immersive experience as if you were physically in the scene with 360-degree views,” Sitaraman says. “It’s scientifically challenging because large amounts of data would need to be transmitted across the internet within milliseconds to enable that experience. But, with such a system, we could do things like virtual classrooms where you could look around and interact with 3D avatars of students joining the class remotely as if they are there in person. This is the future of the internet videos in 10 or 15 years.”

At UMass, Sitaraman is also the founding director of the College of Computer and Information Sciences Informatics Program, a new fast-growing major that teaches students how to apply computational thinking to other disciplines across campus. “Computing is important for any discipline you can think of in the same way that math was important for any discipline in the previous century,” he says. “In informatics, we’re broadening the path to computing education by expanding the scope of what computing can be. We’ve also been able to attract more women and underrepresented students to the computing field through informatics.”

Sitaraman encourages students to think big and not worry about crossing disciplinary boundaries. He says: “Start with a major problem impacting humanity that you really care about and then break it down into smaller manageable pieces that you can solve. Be unfettered in the goals that you try to reach, since the impossible may just be possible.”

Professor Sitaraman explains: What is a content delivery network (CDN)?

A CDN is a vast distributed network built to efficiently move content from where it originates on the internet to where a user consumes it. By “content” we mean pretty much anything that we access on the internet, such as web pages, videos, social networks, applications, games, software downloads, etc. To make the internet more scalable, reliable, and fast, a CDN makes copies of the content and stores them in thousands of locations worldwide so that users can access a copy quickly from a nearby location. CDNs also use sophisticated algorithms to move content reliably across the internet and into a user’s browser, video player, or application. It is like orchestrating traffic flow on a massive road system; if some link on the internet fails or gets congested, CDN algorithms quickly find an alternate route to the destination. The scale of CDNs is enormous because they serve trillions of content requests from billions of people each day. Since we built the first CDNs more than two decades ago, they have become indispensable and are the foundation on which everything else on the internet rests. In fact, the modern internet cannot function without CDNs!

College of Information and Computer Sciences