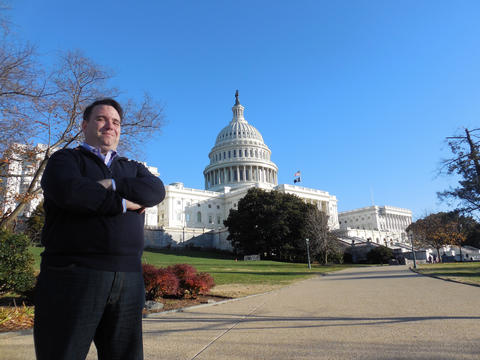 During his sophomore year of college, UMass Amherst political science professor Paul Musgrave awoke to a changed world. “I remember a Tuesday morning I was sleeping in because I didn’t have any early classes, and my suitemate kept knocking on the door, saying ‘You need to come see the TV right now.’” The 9/11 attacks that day, along with the Bush v. Gore decision and the run-up to war in Iraq, were central to Musgrave’s decision to pursue a career devoted to making sense of the political tumult he was witnessing.

“If you were a true millennial,” says Musgrave, who was born in the first year of that cohort, “your first 18 years were in a safe, ordered environment, and then there was this shock. It was such a rupture from the 1990s.”

Musgrave’s early interest in the intersection of domestic and international politics remains his focus—one that he characterizes as revolutionary. “For a very long time, people who studied international relations saw it as separate from domestic policy. The truth is, the two are everywhere and always linked.” Nowhere is that more evident, says Musgrave, than in the current president’s efforts to enlist Ukraine’s help in his reelection, and in the ensuing partisanship that reaches far beyond domestic borders.

“The Constitution was designed to be nonpartisan. Yet within two to five years of constitutional operation, parties started to form and became one of, if not the sole, dominant force in American politics.” As a result, says Musgrave, the customary notion that partisanship stops at the water’s edge—that some things are beyond partisanship—is simply no longer the case.

Studying how domestic institutions shape foreign policy in this way serves as the basis for much of Musgrave’s contributions to media outlets such as the Washington Post, CNN, MSNBC, and Slate, as well as for the book that Musgrave is currently developing from his dissertation. Its working title, Divided States, couldn’t be more relevant. “The Ukraine investigation has its roots in partisan behavior,” says Musgrave. “I can tell you how every member of Congress is going to vote on impeachment. That is not the way our institutions were supposed to be, but we accept this as ordinary and normal.”

And while these divisions may seem to stem from our political institutions themselves, Musgrave stresses, “It is not that partisanship alone divides us, but that partisanship reflects the deep divisions in our society over the proper role of government in allocating wealth and property and the status of women and minorities.” In fact, he adds, “We’re as far from ‘The End of History’ as we could be,” referencing Francis Fukuyama’s 1992 book of the same name, which posited that in the wake of the Soviet Union’s collapse, mankind had reached its ultimate form of government in liberal democracy and capitalism—a view that has proven to be over-idealistic.

Musgrave is more idealistic about the futures of the students in his innovative classes. His project-based approach most recently led 23 honors students in “The Politics of the End of the World” to create podcasts (available to stream at finalexamination.podbean.com) that explore, in his words, “a moment at which ingrained habits and expectations change so dramatically that it is difficult or impossible to conceive of returning to the status quo.” By incorporating such methods as story telling, sound engineering, and interviews, including speaking with a sitting member of Congress and composing original music, students were pushed to build skills that Musgrave believes will serve them well whether they pursue careers in media, analysis, or politics.

Also to that end, Musgrave is currently serving as an American Political Science Association Congressional Fellow in Washington, DC, where he’ll work as an aide for a member of Congress for the entire January to August session, drafting legislation and talking points. “Not only will this inform my research,” says Musgrave, “but also support students who want to go into careers in public service, because in this field the hardest rung to get on is the first one.”

Informed public servants, as well as an informed citizenry, may seem like too much to hope for, but Musgrave remains dedicated. “One of the great benefits of being in scholarship is you should be following the signs where they lead,” he says. “You need to know where you are so you can know where you want to go.”

That’s even more critical as the 2020 elections approach. “I hope voters realize that folks on the other side are feeling the same hurt and pain that they’re feeling, and that this leads them to be not just more civil, but to treat this election more seriously—to view politics as something with real consequences.”

“We could listen and learn from each other,” he adds. “But we should always remember that things don't just ‘work out’—instead, real cooperation and understanding reflect an intense and constant commitment to working together.”