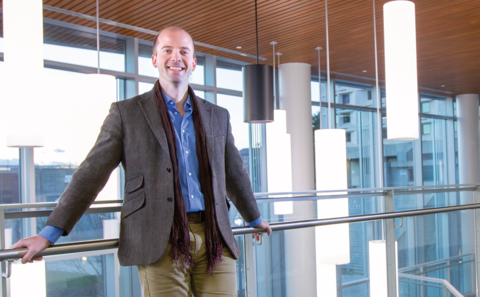 Kevin L. Young is not one for easy answers. In fact, when it comes to beating corporate lobbyists at their own game, Young is a lot more interested in finding the right questions.

“We don’t know enough about how business operates as a political force,” says Young, associate professor in the UMass Amherst Department of Political Science whose innovative use of “big data” and seemingly endless appetite for rigorous analysis has made him one of his generation’s leading scholars of international political economy.

Young’s interest in the power of elites began during his undergraduate days in Ontario, when he made ends meet by pulling a rickshaw—a job that led him to confront what he saw as injustices committed toward the financially vulnerable. “People were being pushed out into the street due to a wave of really bad policies,” he says. “Issues of economics became tangibly important to me. It made the world real.”

But as Young went on to study the workings of the financial industry, he found himself becoming critical of the empirical claims made by his fellow academics and activists. “Academics studying the financial industry tend to be wrapped up in an embattled ethical position, whereby they emphasize the strength of the industry,” says Young. While he shares that ethical position, Young is not afraid to challenge perceived wisdom to uncover hidden truths.

That may mean disproving long-accepted notions, such as the number of “intellectual tribes” in his own academic discipline. Since the rise of neoliberalism in the mid–twentieth century, scholars have described two basic schools of international political economy. Young’s research identified seven schools, revealing that the picture is far more complicated. “We work in a world of plurality, but we teach our own field to graduate students as dualistic,” he says.

More recently, through a grant from the Russell Sage Foundation, Young and colleagues have launched the first comprehensive quantitative study on the “revolving door” concept, a widely accepted theory that describes the flow of personnel between government agencies and the industries that lobby them. “We know that social connection is doing something substantially important,” says Young. “But does being close to your regulator mean you lobby more or less? Is advocating more a sign of weakness, or strength?”

In other words, there’s a lot more going on than meets the eye. Do lobbyists get what they want as a result of their prominence in the network of elites, or are lobbying tactics more predictive of success? “In order to understand the power of the financial industry, we need to look at the particular mechanism of that power,” says Young.

That’s where big data comes in. “We’re at an amazing point in terms of what we can measure and therefore assess empirically,” says Young. By breaking down and analyzing the vast amount of social network data that’s now available, Young is able to pinpoint relationships within the corporate community and understand how networks of elites link together. This sometimes takes the form of spontaneous “who wants to learn network analysis tonight?” classes, to the possible chagrin of his students as they try to keep up with his exuberant eclecticism.

To study questions of diversity among the corporate elite, for example, Young and his colleagues recently designed what he describes as a “massive data template” of prominent business leaders, billionaires, and other power brokers, gathering information on such factors as race, gender, and board membership. Through the network structure that is emerging, Young can discover if people who don’t look like those in the traditional “old boys network” have access to the inner circles of power or whether they remain in the periphery.

Initial results suggest that forms of social conformity are at play—for example, a woman may join a board, but only if she has an Ivy League education. “If corporate elites can only tolerate one degree of difference from themselves, that has huge implications,” says Young. “These are the people who manage the wealth of our society.”

Despite what seems to be an increasing level of cronyism in Washington—“Never mind revolving doors, they have open doors,” Young quips—he remains intent on confronting intractable issues, such as the ones he and his co-authors tackled in his 2013 book Gridlock: Why Global Cooperation Is Failing When We Need It Most. Whether presenting on global financial reform at the UN or discussing post–financial crisis regulation in the leading journals of his field, Young sees it as his job to root out the questions beyond the answers. Or, as he puts it, “In terms of professional priorities, seeking the truth is always number one.”

“Since the financial crisis, a lot of people have claimed that the financial industry didn’t get re-regulated enough, that everything is the same as before,” says Young. “I consider that political defeatism. It’s also false.”

“It’s important to not only look at examples of their success—they fail too. There are points of weakness there. Knowing the conditions that lead to their losing and winning leads to a different agenda for action. And when we know more, we’re all better off.”