The Joy and Intrigue of Discovery

“While simultaneously tackling classes and my research projects can be a lot to handle at times, I have found that my research work has enriched my classroom experiences.” 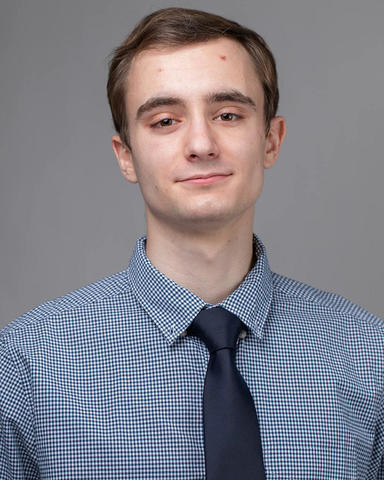 What excites Nicholas Sbalbi about research is the element of surprise. He says, “At UMass I have experienced the frustration of sensitive experiments, the mystery of unexpected data, and the satisfaction of confirming hypotheses. None of these emotions have matched the simultaneous joy and intrigue of discovery—whether it is finding a unique or wacky morphology under the electron microscope or generating surprising yet impactful results when analyzing data.”

Nicholas began working with Laura Bradley, assistant professor of polymer science and engineering (a graduate program that welcomes undergraduate researchers), in his first semester at UMass Amherst. Since then, he has worked year-round for Bradley’s HIP Materials Group and has had his name on one of their published academic research papers. He likes the complexity of materials science, an interdisciplinary field that investigates the properties of matter. “In my research, I’m just scratching the surface of what’s possible,” he says. “It’s a puzzle to figure out which knobs you can turn without drastically varying the system.”

Nicholas’s first project was working on a new chemical vapor deposition chamber for producing functional polymer coatings. These nanometer-thin coatings can be used for battery technology, controlled wettability, and other applications.

His second project was synthesis of micromotors through the modification of the lab’s previously made Janus particles. These particles, named for the two-faced Roman god, have two distinct sides. It was during this research that he made a discovery: a particle in the shape of a jellyfish with one rough and one smooth side. “I was trying to make micromotors, expecting one thing to happen, and instead I got this,” he recalls. “Its weird shape surprised me.”

Says Bradley, “What makes Nick an exceptional researcher is his ability to define scientific questions and then compile data in the context of these questions in order to make concrete conclusions.”

Bradley also lauded Nicholas for playing a significant supporting role in the research of others. Working remotely from home last summer, he collaborated with graduate students to write custom programs in the coding language MATLAB to assist them in data and image analysis, speeding up these processes significantly.

Nicholas plans to study for a PhD in either materials science or chemical engineering, a route that should lead to many more of the scientific surprises he relishes. “My goal is to lead a group of researchers in either an industrial, academic, or national laboratory setting, helping to bring others to their own discoveries,” he says.