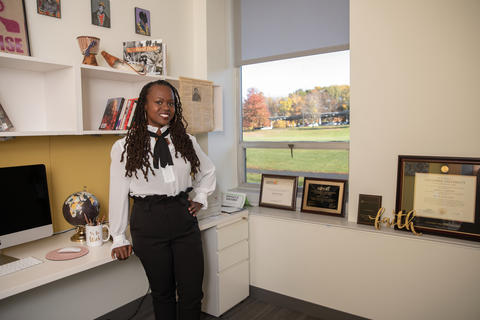 Growing up as a first-generation American in a working-class neighborhood in Brooklyn, Jamila Lyiscott learned how to navigate the contrasts between her family’s Caribbean background and an educational system that demanded assimilation. “I was an A-student only because I knew how to do school,” recalls Lyiscott, now an assistant professor of social justice education in the UMass Amherst College of Education, a senior research fellow at Columbia University’s Teacher’s College, and a nationally renowned spoken word artist.

As she became involved in her community, though, Lyiscott noticed a disconnect that she found increasingly disturbing. “The brilliance that exists throughout the African Diaspora wasn’t centered in school,” she says. “Instead, it was in these out-of-school spaces I could see the ways that brilliance was valued.”

This disconnect brought her to a turning point at age 19 when Lyiscott was speaking on an academic panel and a woman told her how articulate she was. “I knew that if she’d heard me speaking the way I spoke at home or with friends, she wouldn’t have said that,” says Lyiscott. “What was it at this intersection between language and race that allowed this woman to make an assessment of my value?”

Questions like this became the basis for Lyiscott’s viral TED talk, which has been viewed nearly 4.5 million times and led to appearances on national and international media outlets including Spike Lee’s “2 Fists Up,” NPR, and Huffington Post, as well as a commission by TED for a poem, titled 2053. Among other honors, she was recently recognized by the American Educational Research Association—the world’s top education research organization—with their “Outstanding Public Communication of Education Research” and “Scholar-Activist and Community Advocacy” awards.

Through it all, Lyiscott has devoted her career to challenging the accepted notions of a pedagogy rooted in colonialism, with its emphasis on “civilizing” those from outside the traditional framework.

“Young people are grounded in experiences that people outside their communities can’t understand,” she says. “They’re the experts on what needs to happen in their world. Yet they’re bombarded with messages that they have to engage in assimilation.” By confronting this top-down education model, Lyiscott encourages young people to recognize their own experiences as valid, starting with naming what they’re feeling. “When they start getting those tools, they light up and become motivated. They begin to understand, ‘Oh, so that’s why I feel so uncomfortable. Why can’t I just be what I am?’”

Questioning who gets to produce knowledge is at the core of her teaching and speaking engagements, as well as at Cyphers for Justice, a program she founded at Columbia University that uses hip hop, digital literacy, spoken word, and social research methods to apprentice New York City high school students, incarcerated youth, and teachers as critical researchers.

It’s also central to her new book, Black Appetite. White Food. Issues of Race, Voice, and Justice Within and Beyond the Classroom, already in its second printing after selling out in just ten days. The text serves as a practical guide for teachers seeking to increase their awareness and foster action around racial injustice and inequity—but in Lyiscott’s hands, the content goes beyond academic language, moving through poetry and personal narrative to disrupt readers’ preconceived notions and resonate on a gut level.

“It never goes well when you try to disrupt the institutions,” she laughs. But while many of her ideas have met with resistance, Lyiscott has worked to find spaces in which she can build allies who will help nourish her work. “It’s called fugitivity: moving from freedom to freedom. There are powerful people and places who are willing to be part of this work, but I have to find those spaces of freedom.”

Luckily, UMass Amherst is a place open to such concepts, as evidenced by Lyiscott latest project, a new Center of Racial Justice and Youth Engaged Research that she is launching along with education professor Keisha Green. “We’ll be collaborating around how to have local, national, and international conversations about the ways social and racial justice needs to be central to education across disciplines,” says Lyiscott. That means going beyond having Black History Month Programs, she says, to challenging institutions to rethink embedded standards of intellectualism.

“We need to move from cultural hierarchy to cultural pluralism,” she states, a belief that’s finding form in Lyiscott and Green’s Fulbright-funded project to take a group of educators to Ghana next summer to explore the ways ingrained methods of learning and teaching shape their curriculum. Lyiscott calls it “one of the first big steps to start situating my work globally.” She’s also beginning a Coyle Fellowship with the University of Notre Dame’s Center for Literacy Education.

“I’m proud of the way that I have drawn on the culture and history that my parents embedded in me,” says Lyiscott. “I’ve been able to remain true to the integrity of that journey, and when I’m authentic, other people feel like they have permission to be authentic.”