Innovation to Save Lives

“I did not have a single revelatory experience that pointed to my future. Instead, I had a ladder that helped me grow intellectually; each step of this ladder was an experience I was able to live through my research.” 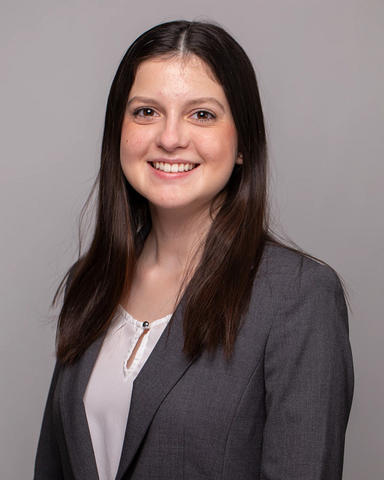 Eugenia Roberts was only 17 when she came to UMass Amherst from her home country of Nicaragua. English was her second language and she had some trouble at first fully understanding her fellow students. Understanding biochemistry and molecular biology, however, has not been a problem. Working with Sloan Siegrist, assistant professor of microbiology, Eugenia has developed a new, much faster way to detect bacterial bloodstream infections. Last fall, the technology received a $100,000 seed grant from the UMass Amherst Manning/IALS Innovation Awards program.

As Siegrist says, “I often forget that Eugenia is an undergraduate. Her maturity and productivity would be impressive at any stage! In the year since she joined my lab, she has made an outsize impact on our work.”

In her first semester at UMass, Eugenia joined the lab of Leonid Pobezinsky, assistant professor of veterinary and animal sciences, and conducted cancer immunology research. “Coming from an underdeveloped country, I had to teach myself not only basic things like the science behind PCR [polymerase chain reaction] but also very advanced molecular biology pathways that I would not otherwise have learned so early in college,” Eugenia recalls. “I even took a senior-level immunology class during my sophomore year.”

She next interned in the Flow Cytometry Core Facilities, where she assisted researchers with cutting-edge cell imaging technology and was exposed to the depth and breadth of research at UMass Amherst. Following her scientific curiosity, she went on to the Siegrist lab, which conducts research on the cell wall of intracellular pathogens. One of the lab’s goals is to engineer the bacterial cell wall for new biomedical applications.

In the Siegrist lab, Eugenia worked on developing a new way to detect bloodstream bacterial infections. These types of infections impact 1 to 3 million patients in the US each year and have a high mortality rate of 15 to 30 percent. It now takes up to three days to diagnose sepsis and identify the proper antibiotic treatment.  Eugenia executed experiments that prove the lab’s novel means of detecting bacterial growth can give doctors results within hours, significantly decreasing the mortality of sepsis patients.

Eager to develop the lab’s new diagnostic technology for commercialization, Eugenia became conversant in the language of business. She researched the market, worked on the business model, consulted with attorneys, searched for grants, and wrote parts of the proposal for the Manning Award. Says Siegrist, “Eugenia will be a well-deserved co-author on the provisional patent.”

“My project at the Siegrist lab helped me develop something classes cannot really teach you: critical thinking regarding real-life scientific problems,” says Eugenia. “I knew I enjoyed research but making a fast, direct impact on people’s wellbeing played a huge role in my passion for my project. This is why, ultimately, I have decided the best path for me is to pursue an MD/PhD.”