From the Farm to the Lab

“The research realm gives you a place to apply your knowledge and space to practice what you are learning, which is so important.” 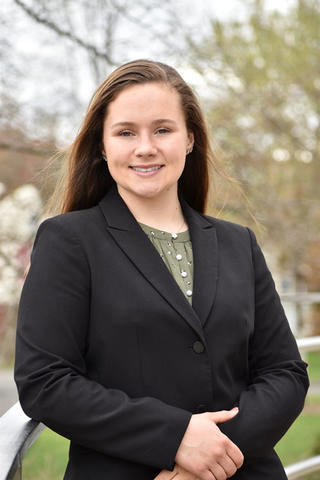 As a young girl dreaming of becoming a veterinarian, Kate Loonie may have expected some of the hands-on experiences she had at UMass Amherst. She vaccinated and ear-tagged Belted Galloway cattle, medicated injured horses, helped deliver lambs, and even cared for turtles as a summer intern at the New England Aquarium. But she didn’t expect that some of her most fulfilling work would be performing gene sequencing on a computer.

“I never saw myself doing research, especially in my undergraduate years,” Kate says. “I didn’t think I would enjoy lab work. But it pushed me to places I didn’t think I’d be able to go.”

Working in the lab of Professor of Veterinary and Animal Sciences Cynthia Baldwin beginning in her freshman year, Kate has been involved in three cellular immunology research projects related to tracking down a gene family, known as WC1, in sheep, cattle, and goats. She will leave UMass with her name on three published research papers.

Although genetic sequences at first looked like alphabet soup to her, Kate learned the Baldwin lab’s bioinformatics technology quickly. “I practiced and practiced that tedious software every moment I could,” she recalls. Baldwin noted that Kate is a good collaborator who is proactive in the lab. “She is really passionate about learning new techniques and is a very mature, independent, and responsible individual,” she said.

Having learned the software, Kate was given an independent project—looking at the gene sequences of the auroch, the ancient ancestors of our modern-day cattle. The auroch, immortalized in cave paintings, were massive super cattle that lived in Asia, Europe, and North Africa before their extinction in 1627. Kate sequenced the DNA from a 6,000 year-old auroch humerus bone and gathered evidence of the presence of WC1. “I concluded that some bovine WC1 molecules were preserved from the ancient auroch, while some molecules seem to have been lost or created from evolution. This shows it’s possible the aurochs were seeing the same pathogens as we’re seeing today,” she says. This research has important implications for improving the health of ruminants.

For Kate, lab work revealed the true potential of the impact a veterinarian can have in research. “Research made me stop and think,” she says. “I started to think about situations differently and more analytically both in the lab and out of the lab, in classes, at the cattle barn, and everywhere else. I caught a glimpse of the potential I will have with more education, and how much I can contribute to developing science and knowledge in my future. With that, I relit my passion for veterinary science.”

Kate will begin studying for her doctor in veterinary medicine degree at Cornell University this summer. After I have established my veterinary career, she says, “I can see myself pursuing a master’s or PhD in the research realm. I hope to teach the young undergraduate generation of pre-veterinary students.”