Solomon Siskind '21 was honored as a Rising Researcher for his research project analyzing the experiences of non-white student athletes.

Sport management and Sociology
Member of the Spring 2021 class of Rising Researchers, honored for their exceptional research, scholarship, and creative activity.

“Research can be tough, but when you love it and it’s meaningful to you and others it doesn’t feel like hard work. I’ve loved every second of it.” 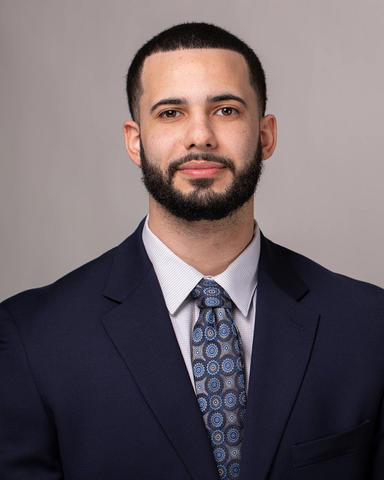 As a Black student-athlete on the UMass Football team, Solomon Siskind was aware that some of his non-white friends and teammates experienced culture shock, microaggressions, depression, and feelings of isolation at UMass Amherst. In his junior year, he gathered and analyzed data confirming and quantifying these problems. That project set the course for his future: “Research will be a big part of my graduate school life and career,” he says. “I want to ensure that student-athletes are getting the most out of their college experiences and that these institutions are creating equitable environments for everybody involved.”

Early in 2020, Solomon and Desiree Oliver ’21, a basketball player on the UMass women’s team, represented UMass Athletics at the Black Student-Athlete Summit in Austin, Texas. At the conference, Solomon says, “I was able to learn from and interact with some of the brightest people in sport and mental health. This summit exposed me to people of color, specifically Black people, in unique roles that I wasn’t accustomed to. The event allowed me to better understand my experience as a Black student-athlete.”

Solomon and Desiree returned to campus charged up to make change at UMass and immediately began work on a research project: “Analysis of the Black Student-Athlete Experience at a Predominantly White Institution (PWI).” They created a 47-question survey focused on racial and ethnic differences in attitudes towards support systems and resources at UMass, went through the rigorous UMass IRB (institutional review board) approval process, and sent their survey to 650 UMass student-athletes.

“This is something we’ve seen first-hand, but it goes unsaid,” Solomon says. “And we hadn’t seen hard data. To finally see the numbers confirms what’s going on. You can’t deny the numbers.”

Having seen the numbers, Solomon and Desiree took action. They inaugurated a campus Call to Action Research Fair and made formal recommendations for change to UMass and UMass Athletics. Their proposals ranged from inclusive community groups, to mental health education awareness, to transformational experiences for student-athletes. “With COVID-19 and with the Black Lives Matter movement, UMass was already starting to get ahead of this,” Solomon says. “We’ve already seen some progress in Athletics, such as new safe spaces for our Black athletes and the hiring of a director of sports psychology.”

Solomon will stay at UMass to study for his master’s degree in sport management and will serve as a research assistant to Vice Chancellor for Diversity, Equity, and Inclusion Nefertiti Walker. He concludes on a positive note: “There’s still work to be done, but I’m confident that UMass Athletics and UMass as a whole are heading in the right direction.”