Drawing on Her Identity

“I am no longer consumed by the fear that a career in academia is incompatible with spearheading community development, policy change, and the celebration of my voice as a marginalized thinker.” 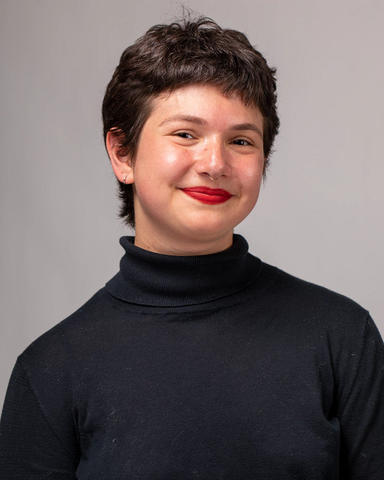 After enrolling at UMass Amherst, Isabel Levin progressed from barely having heard of sociology to becoming what Assistant Professor of Sociology Kathryne Young calls “the most promising undergraduate researcher I have ever met.”

In the summer of 2020, Isabel took part in the Moore Undergraduate Research Apprenticeship Program (MURAP) at the University of North Carolina Chapel Hill, where marginalized undergraduate researchers in the social sciences and humanities conduct independent research. Through MURAP, Isabel came to the realization that her identity and personal experiences as a Latinx-Jewish woman were a resource: “I learned that I can maintain scientific rigor in my contributions while still using my voice as a symbol of resistance against the historic silencing and mistreatment of my community,” she says. Consequently, Isabel chose to draw on her identity as a Latinx-Jewish woman for her research project.

On her research website, Isabel recalls growing up with her Peruvian mother in Marblehead, Mass. “I always felt like my family stuck out, especially in school,” she writes. “It felt like my mom’s voice, perspective, and knowledge did not have a place in my education and, in turn, that she was somehow less than the other moms. As I have grown up, I have started to think more critically about how non-white, specifically Latinx, families are treated within public schools and how schools can, but often fail to be, places of community development and collective growth.”

For her MURAP project, Isabel focused on understanding actions taken by school administrators in North Carolina to integrate Latinx parents and address their needs. In her paper, “‘They Don’t Know How to Complain’: How American Schools Have Forgotten Immigrant Parents,” she concluded that school administrators implicitly blame Latinx families for their own disadvantage and then as a logical consequence, aim to change parents rather than enhancing the inclusivity of the system. Isabel’s advisor, Young, remarks, “This cogently argued work is simply remarkable.”

Upon returning to UMass last fall, Isabel built on those findings for another paper, “A Seat at the Bargaining Table: How Privileged Parents Determine School Operations in the COVID Era.” She also conducted an oral history with her mother, “El Sendero Luminoso A Través de Los Ojos de Mi Mamá” (The Shining Path Through the Eyes of My Mom). Her honors thesis will explore the various dimensions of how second generation Latinx immigrants come to understand their sense of self and cultural identity.

She plans to pursue a PhD in sociology and become a professor. “I see my future as filled with opportunities to address the social ills which have shaped my own life in an impactful and gratifying way,” she says.