“I realized I had to understand history and culture and be able to speak to people in their own languages in order to make a positive impact on the world.” 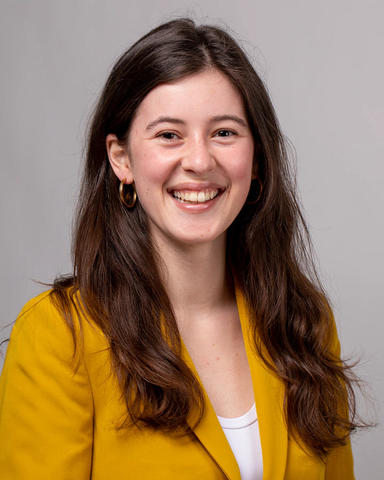 In her first year at UMass, Claire Healy had a grand vision. What if there was an international, multilingual magazine that could create community among young people across borders? The magazine would publish poets, writers, artists, and journalists and its audience would experience a diverse collective of perspectives, artwork, and languages. The first issue of Claire’s dream magazine, The Open, will be published before she graduates from UMass in May. She produced it on a focused foundation of four years of coursework, internships, study abroad, and extracurricular work.

Claire traces her interest in global social justice to her childhood among the international community in Cambridge, Mass. “Growing up, the conversations my friends and I were having were often about social justice and human rights,” she says.

Beginning with her first semester at UMass, she took advantage of every opportunity to expand her education beyond the classroom: she was both a political science and a legal studies research assistant; she participated in the College of Social and Behavioral Sciences internship program in Washington, DC, and remained in the capital for a summer internship; she wrote for the Massachusetts Daily Collegian and was an Amherst Media news anchor; she worked as a communications assistant for Commonwealth Honors College; she attended a journalism bootcamp.

In her sophomore year, determined to broaden her international perspective, Claire doubled down on her political science classes so that she could study abroad both semesters of her junior year, enrolling in the most immersive programs available. In fall 2019 she studied Arabic (her minor) in Jordan, and in spring 2020 she studied Spanish in Havana, Cuba, and lived with a host family there.

In Cuba and Jordan she made close friends who would become staff members and contributors to The Open. The first edition of the magazine is in English, Spanish, and Arabic. “The design itself is a demonstration of the ability to have conversations despite linguistic or physical barriers,” says Claire.

The 70-page first issue includes 11 thought-provoking articles, such as a story from Lebanon about the tradition of gun shootings at weddings and funerals, several stories about higher ed during the pandemic, and a story from Cuba about consumerism’s impact on the planet, as well as poetry, and art from around the world.

Claire’s faculty advisor, Professor of Political Science Paul Musgrave, has high praise for The Open. He says, “This is an unusually challenging and impressive piece of work. Claire has wrangled dozens of writers, artists, translators, and editors to contribute to her publication. She’s taught herself how to manage across cultures and time zones, how to balance editorial judgment and artistic freedom, and how to create web sites and use desktop publishing software. This is an exemplary piece of work that UMass should be proud to claim, embodying as it does a commitment to excellence, creativity, inclusion, and equity throughout.”

Claire’s outlook is eloquently expressed in The Open’s mission statement: “We believe people across the world are the same, and that young people make positive change. The future rests in the hands of those who understand these international connections and prioritize common peace and happiness.”

This summer, Claire will serve as a fellow in the College of Social and Behavioral Sciences internship program in Washington, DC.  And she and her collaborators plan to keep publishing The Open. “I really want to make this long lasting,” Claire says, “I believe we can spark positive change.”