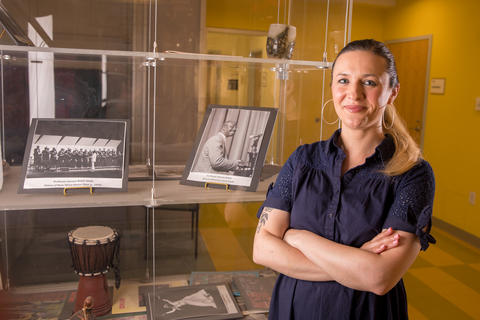 Associate professor Britt Rusert has taken what some would consider a circuitous route to her faculty position in the UMass Amherst W. E. B. Du Bois Department of Afro-American Studies. A published scholar of black literature and culture, Rusert’s first love was biology, which she hoped would lead her to medical school. An unfortunate (or fortunate as it may be) turn of events led her down a very different road. Says Rusert, “I decided not to go on to medical school after I passed out from seeing blood while I was doing an internship at a local hospital. I thought, ‘I need a different career path.’”

While Rusert was working on her biology degree she was also pursuing an English major and specializing in LGTBQ literature and queer theory.

“I went to a small liberal arts college where it was possible for me to redirect and finish up a major in English. We had faculty in the English department at Allegheny College who were thinking about the cultural valences of science and medicine. So my particular cross-section of interests really fomented early on. I continue to think of my work as being at the intersections of feminist and queer studies, literary studies, cultural studies and black studies,” says Rusert.

In more specific terms, Rusert’s work addresses unique aspects of the history of racial science in the United States. Her first book, “Fugitive Science” (NYU Press), is an accounting of African Americans’ responses and resistance to the rise of racial science in the nineteenth century. It won an Honorable Mention from the 2019 Modern Language Association Prize for a First Book, and was Sole Finalist Mention for the 2018 Lora Romero Book Prize presented by the American Studies Association.

“The power and intensity of that story has made us miss the people who are actually responding to and challenging those regimes of science and experimentation,” says Rusert. “A lot of my work has thought about practices of science from below; how African Americans were refusing biological theories of race in the nineteenth century, how they were fighting regimes of scientific and medical exploitation,” she adds.

In many ways, Rusert says “fugitive science” can been seen as kind of a prehistory to the twentieth century activism of groups like the Black Panthers, who were “running community health programs as well as a sickle cell research initiative.” She sees parallels between black activist movements in the 1960s and ‘70s and black engagements with science and medicine in the antebellum period. “It’s an interdisciplinary account of the deep connections among black science, literature, and culture in the nineteenth century,” says Rusert.

Rusert also teaches and works in black speculative fiction and Afro-Futurism, which encompasses a broad array of non-realist genres such as romance, mystery, detective fiction, horror and science fiction. It’s an area of scholarship that she’s passionate about and that has a presence in much of her work. “I teach a black speculative fiction course and we engage all of those different genres. We study Harlem detective novels, we do black sci-fi and fantasy. It also becomes a way to think about the speculative and experimental dimensions of more traditional forms of black literature,” says Rusert.

Though she was trained as a nineteenth-centuryist, Rusert’s interest in race and science and speculation often bring her into more modern times. “As I’ve been doing more teaching in Afro-Futurism and thinking about black speculative writing today, it’s allowed me to return to nineteenth-century texts and see them in a different way. There are interesting time travel elements often in slave narratives. There’s a lot of speculative work and speculation happening in early African American fiction and visual art too,” says Rusert.

The question of the speculative is what drew Rusert to collaborate on a second book, “W. E. B. Du Bois’s Data Portraits: Visualizing Black America” (Princeton Architectural Press), with anthropologist and UMass Amherst colleague Whitney Battle-Baptiste, director of the campus’s W. E. B. Du Bois Center.

“Du Bois’s graphics are almost shockingly modern and they anticipate questions today in terms of how people are thinking about data visualization. Du Bois and his research team also look forward to groups like Data 4 Black Lives, who are thinking about uses of data in activist spaces, thinking about how data can be used to support social justice movements. Du Bois was already anticipating some of that in 1900,” says Rusert.

The response to the Du Bois book has been “inspiring” according to Rusert. “We are hearing from so many groups; sociologists, historians, artists, people who run museums. We are hearing from public policy people. People who do data visualization. Already there are some who are using Du Bois’s data and producing new data visualizations. Or they are taking different measures from the images and using data from today to try to update images. I really love projects that can take on new life and can be used in all kinds of ways by different actors,” says Rusert.

With two widely successful books in circulation, Rusert is on to her next project. She received an American Council of Learned Societies Fellowship and a National Endowment for the Humanities summer stipend to support her next book. “I’m writing an entire book about one text that was written in the mid-nineteenth century. It’s a fictional series that was published in the Anglo-African Magazine in 1859 called the “Afric-American Picture Gallery.”  The text is really experimental and even avant-garde. There are also parts of the story that read like quest fantasy,” says Rusert. One of the goals for the project, she says, is to think about how the author, William J. Wilson, is theorizing about black art and the problems of black art in the nineteenth century.

As part of her academic duties, Rusert directs the Afro-American undergraduate studies program, a major, she says, that has great interdisciplinary opportunities and is growing. “This semester, I’m teaching a general education course on Southern Lit, and I ended up with students from disciplines as varied as the Isenberg School of Management to Kinesiology,” says Rusert. ”I could see every week little lightbulbs going off. A lot of my research and work increasingly is being inspired by my students. And the Du Bois department has a history and a wealth of its own that is both important and inspiring to me.”