From Bog to Table

For over 100 years and counting, the UMass Cranberry Station has invigorated the Commonwealth’s cranberry industry through research and innovation.

Blended into rich sauces, studding sweet breads and pies, or adding a tart note to juice cocktails, cranberries have been an essential part of American food culture since the country’s earliest days—especially at Thanksgiving tables and throughout the fall. 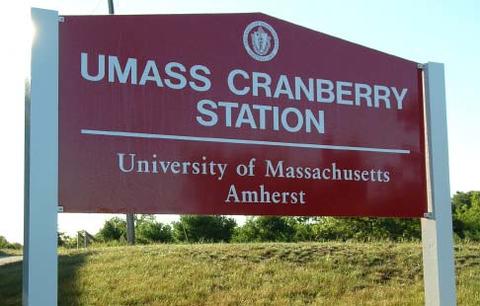 The cranberry is native to Massachusetts, where the industry started and where the very first Thanksgiving was celebrated. Today, cranberries are the #1 food crop in Massachusetts. Cranberries grow on perennial low-lying vines in wetlands, commonly called bogs. The Commonwealth is home to around 13,000 acres of producing bogs that yield approximately 200 million pounds of cranberries each year, making it the third largest cranberry producer in North America. The industry accounts for around 7,000 direct and indirect jobs in the Commonwealth and contributes $1.4 billion in economic value annually to the Massachusetts economy. It also helps conserve open space since cranberry growers own more than 60,000 acres of uplands associated with their farms. And deeply intertwined with and crucial to the success of the cranberry industry in Massachusetts is the UMass Cranberry Station.

The station’s history of supporting cranberry growers through research and innovation dates back nearly to the beginning of the cranberry farming industry on Cape Cod in the mid-1800s.

Since then, said Hilary Sandler, director of the UMass Cranberry Station and extension professor, “We’ve had a significant impact in making the industry vital and providing growers with new tools. We have pushed the research envelope substantially.”

According to Sandler, the UMass Cranberry Station is the only research facility in the country—and perhaps the world—dedicated exclusively to studying cranberry.

“To be able to dedicate your efforts to a single crop is very rare. It allows us to take a deeper dive,” she explained. While currently seven researchers work at the station, “We could have 40 scientists here working just on cranberries and we would still have more questions than answers. The questions change and evolve over time.”

Now, the station is entering a new era with construction underway on new and improved facilities at its East Wareham location, thanks to $5.75 million in state funding due to support from the Baker Administration as well as the sustained efforts provided by State Senator Michael Rodrigues and State Representative William Straus. UMass Amherst is also investing $2 million in funding.

Over a Century of Partnership

Cranberry research, under the university’s umbrella, began well over a century ago. In 1905, the Cape Cod Cranberry Growers Association (CCCGA) invited Professor H.T. Fernald, an entomologist at the Massachusetts Agricultural College (or MAC, the predecessor to the University of Massachusetts Amherst), to speak at its summer meeting about insects that were seriously damaging the crop every year. The growers urged further study on the topic, and Henry Franklin, a PhD student in entomology under Fernald's tutelage, was chosen to survey the cranberry insect problems. Eventually, the CCCGA successfully petitioned the Massachusetts Legislature to fund a permanent facility for cranberry research, and in 1910, the Cranberry Experiment Station of the Massachusetts Agricultural College was founded. The growers pledged a 1 cent per barrel contribution to help fund Franklin’s position overseeing the cranberry research program.

Since then, the station’s work has been inextricably woven together with the Massachusetts cranberry industry. According to Joe Shoenfeld, associate director of operations and communications at the UMass Center for Agriculture, Food and the Environment, the extension program is designed to conduct research on topics directly relevant to growers. The station’s staff regularly meets with growers in large and small groups, or makes visits to bogs in the region. The growers share challenges they are grappling with—such as insects, disease, weeds, and extreme weather—and the station’s scientists study these issues then disseminate their findings through publications and meetings. The station conducts its research on an 11-acre bog on its site, a seven-acre farm that is leased in Myles Standish Forest, and on growers’ farms. The cranberries it produces are sold to Ocean Spray and the proceeds are reinvested back into maintenance of the cranberry farm.

“We’ve been going down this road for the past 110 years, really working hand-in-hand with the growers. It’s a very special kind of reciprocity, which I don’t think exists in a lot of other industries,” said Sandler.

One such grower is Jeff Kapell, who runs Kapell Cranberries on 44 acres in Plymouth, Mass. He first sought advice on cranberry growing from the station’s director over 40 years ago, before he even got into the business. Since then, he said, the station has been an invaluable resource for him and all the growers in the state.

“The Cranberry Station is the foundation for horticultural cranberry growing in Massachusetts,” he said. “They help us collectively by developing best management practices, and also support us on an individual level. They’re on the forefront of developing new and safer products to respond to the challenges we face, and helping us to be more environmentally sustainable.”

For example, Kapell pointed to the station’s research on the efficacy of low-phosphorous fertilizers, which ultimately enabled the industry to transition to blended fertilizers that were lower in phosphorous and better for the environment.

Indeed, the station’s research and innovation over the years have advanced the industry in many important ways. Franklin, the station’s first director, developed a workable frost warning service around 1920, still used today, to help growers protect their plants from frost damage. Another station scientist, Dr. John ‘Stan’ Norton, was instrumental in introducing the first use of sprinkler irrigation in Massachusetts bogs. This was transformative since it allowed growers to quickly and efficiently protect their plants from frost, as well as provide supplemental watering. Station scientists also made major contributions to the science of cranberry entomology, evaluated new hybrid cultivars produced by the USDA cranberry breeding program, and developed the cranberry Keeping Quality Forecast, which guides growers to maximize their fruit rot control and increase post-harvest quality of fresh fruit.

Bridge to the Future

With the new state funding, the Cranberry Station is receiving significant upgrades to its facilities, including a new building. The project, expected to be complete in summer 2022, will result in the station having several new labs, a large meeting room, and offices, and ultimately will enable it to house at least five new scientists, expanding the station’s research portfolio.

“It’s going to greatly enhance our ability to deal with pressing issues for the cranberry industry,” said Sandler. She hopes to engage visiting scientists and postdocs from a variety of disciplines, who can bring their expertise to bear for a few years at a time to address the most significant issues of the day.

“These kinds of shifts have a huge impact on plant physiology and fruit quality,” she said. One specific concern: cranberries are triggered to produce their vibrant red pigment by cool temperatures and shorter days in the fall. Warmer nights caused by climate change make that harder to achieve before the berries succumb to rot.

“Some people say this is going to be the death knell for the industry,” said Sandler. “I don’t believe that at all. We will still grow cranberries in Massachusetts, but we may need to breed for different conditions. There are many potential areas of research to be tapped that we’ve never had to think about before, even 10 or 20 years ago.”

This story was originally published in October 2021.