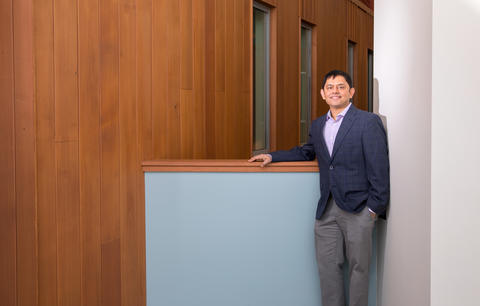 Working at McDonalds in high school for minimum wage, Arindrajit "Arin" Dube knew he had a path forward to college and a professional career. That wasn’t the case for most of his co-workers. “There’s a mistaken notion in the United States that we have a lot of mobility—that increased mobility can substitute for a more equal distribution of income. For many people, that’s just not true,” says Dube, a professor in the UMass Amherst Department of Economics. The fact that people spend years at low-wage jobs tells us how dependent workers are on these jobs and contradicts the notion that they are stepping stones, says Dube.

Widely considered one of the nation’s foremost experts on the economic effects of minimum wage policies, Dube has been interested in issues of income and wage inequality “probably longer than I’ve known those terms,” he says. Throughout his student years at Stanford, Harvard, and University of Chicago, he focused his efforts on increasing wages for campus service workers, including those contracted from outside firms, who are often paid less than workers hired directly.

Since Dube’s days slinging burgers in the 1990s, the face of the low-wage worker has changed. Then, nearly half of all minimum wage earners were teenagers. Today that figure is less than one in five. Meanwhile, inflation has grown faster than wages, and while some states and municipalities have taken it upon themselves to raise their minimum wage, the federal standard lags behind.

It’s a struggle Dube is all too familiar with. His landmark research on the effects of minimum wage hikes across county and state borders showed no significant job loss in communities that raised wages versus neighboring communities where wages stayed the same—countering the perennial argument of opponents. President Obama referenced those studies in his 2013 State of the Union address in support of an increased federal minimum. “It’s nice to know someone was paying attention,” Dube laughs. The information also played a key role in Dube’s testimony before Senator Elizabeth Warren at Senate hearings on a 2013 bill to increase the federal minimum, and importantly, tie future increases to the Consumer Price Index in order to help wages keep pace with inflation.

That bill didn’t pass, and much of the country is still contending with decades of wage stagnation that contributes to what Dube calls “fissuring” in the workplace between low and high earners. That’s particularly true as companies continue to cut costs and reduce staff by contracting out low-paying jobs such as janitorial services and sales—a strategy that also helps protect companies from the resentment of workers who discover they’re earning less than their peers. “We are increasingly a segmented society not only in terms of where we live but also where we work,” says Dube. “High- and low-wage workers today are often in different companies, just as they’re in high- and low-cost housing.”

This creates “a barrier to the processes that generate empathy,” says Dube. “Interacting with people of different background and economic status creates a degree of bonding; increased polarization makes that harder and creates more strain on society.” But while Dube believes that it’s high time for the federal government to step in with wage increases, and while grassroots movements such as Fight for $15 are important ways to generate sorely needed discussion, the answer to that polarization isn’t as simple as a single number.

“Politically speaking, it makes sense to have a focal number. But what $15 means in Massachusetts is very different than in Mississippi,” he says. “It’s important to understand how local labor market conditions could imply different approaches.” One approach that Dube has proposed—and which has subsequently been adopted in states including New York and Oregon—is a regional, tiered system that establishes different minimums based on the varied cost of living in urban and rural areas within a state.

As with any policy, says Dube, there’s a trade-off. Setting the minimum wage too low could prevent workers from seeing the full benefit, while setting it too high may have unintended consequences. “Understanding the balance has been a central part of my research,” he says. “We are in the midst of experimenting with the minimum wage, and all experiments carry risk. As an empiricist, my job is to understand which policies are most effective and come up with answers that make the most sense.” That may mean tolerating a certain amount of job loss, or turning to other tools such as the Earned Income Tax Credit to fill in the gaps.

“The questions I’ve ended up asking are based on what I see around me that concerns me. That’s why I’m doing the work I’m doing.”