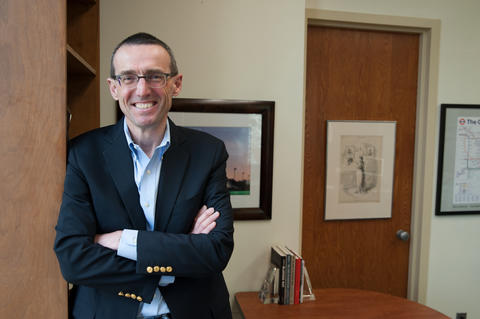 Imagine trying to solve a Rubik’s Cube while the squares are constantly changing color. That’s what it’s like to wrestle with issues of policy making and governance, according to Alasdair Roberts, UMass Amherst professor of political science and the inaugural director of the university’s new School of Public Policy.

It’s also what piqued Roberts’s interest in the study of government as far back as middle school. “I’ve always enjoyed looking at these problems because they’re so important but also so complex,” he says.

Roberts’s fascination with problem solving and aptitude for clear-headed analysis has earned him a reputation as a voice of reason in a changing world. He’s not afraid to ask thorny questions, as he does in his latest book, Can Government Do Anything Right? (Polity, 2018). His answer? Yes, though it may not always look that way.

“A lot of experts today are talking as if the world is coming to an end,” he explains. “But there have always been moments in our history where it feels like things are falling apart. When people say it’s never been as bad as it is today, they’re almost always wrong.”

Instead, Roberts sees our current disillusionment as a period of transition and adjustment, albeit a painful one that may require patience and some strategic reinvention to ride out successfully. "Old policies no longer fit new realities," he says.  “So we have to go back to fundamentals, asking what government should do and how it should do it.”

Periods like this are far from unique, he points out. What’s important is to stay focused on the big picture. “There’s a temptation, especially in the current administration, to focus on the scandal of the day,” says Roberts, “and the news media feeds that. Yes, we have to pay attention to ethical lapses, but the important questions are about big ideas.”

In other words, what should our national priorities be and how might we go about achieving them? What is government’s responsibility in terms of the economy? How much do national borders matter now that, in Roberts’s words, the “borderless world phase” is over?

Figuring all this out requires a political environment that retains a degree of openness and flexibility, says Roberts. “Under conditions of uncertainty, people find the notion of a strong leader appealing. There’s also a desire to hunker down and protect ourselves against perceived threats. But neither of these helps with the process of adaptation.” What does help is constructive conversation that avoids undue pessimism and strives for creative solutions.

Those conversations are going to be all the more important in the years to come. According to Roberts, we’re emerging from a period of unusual stability during which small government and economic deregulation were the norm and relative accord between superpowers was taken for granted. That’s no longer the case.

“In the past few decades, we’ve thought that all great countries of the world were converging on the idea of liberal democracy,” says Roberts. “Clearly, that’s not true anymore. What do we do in a world where Russia and China have paths that are not in line with the U.S. and other liberal democracies?”

It’s a subject Roberts is exploring further in preparation for his seventh single-authored book, which will focus on the new set of realities stemming from the emergence of super states. “The politics of this century is going to be dominated by states that are exceptionally large and complex,” says Roberts. “Three states—India, China, the United States—and the European Union are going to account for more than half the world’s population. India alone will have 1.5 billion people by the middle of the century. There’s never been a political system that large in all of human history. How do you govern a state like that?”

That’s what makes a new initiative like the School of Public Policy so vital. “The flagship campus of a public university needs to have a really vibrant public policy component,” says Roberts, who sees the school as a hub of research and dialog on policy issues, as well as a forum for conversation across campus and a means of connection between the university community and policy makers at all levels of government. By growing its programs for undergraduate and graduate students—such as its new one-year master’s in public policy—the school helps fulfill the university’s goal to make higher education more accessible and affordable.

“We have to figure out how to respond intelligently to new challenges,” says Roberts. “Democratic systems are better at surviving than other systems, but there’s no guarantee.” To the new generation of “entrepreneurs, idea brokers, and leaders” that he hopes will help forge a path in a world where conflict is the norm, Roberts urges, “Public service is exciting, intellectually engaging, important—and they can make a difference.”