Read about Ellsberg’s release of the Pentagon Papers, subsequent trial, and revelations of the crimes of the Nixon White House. 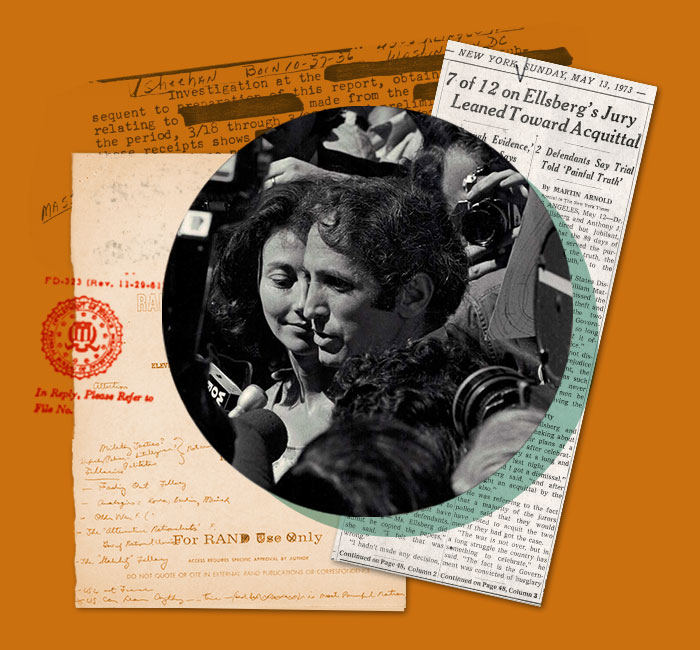 “Wouldn’t you go to prison to help end this war?”—Daniel Ellsberg

In 1971, Daniel Ellsberg leaked the top-secret Pentagon Papers to the press, setting in motion a chain of events that ultimately led to the Watergate scandal and the resignation of President Richard Nixon.

Why did he do it? Why was he willing to risk his career, even his freedom, to leak a highly classified history of U.S. involvement in Vietnam first to the New York Times, then the Washington Post, and, within two weeks, seventeen other newspapers?

He wanted to bring an end to what he had come to view as a criminal and unjust war.

Several years earlier, in 1967, Secretary of Defense Robert McNamara quietly commissioned a study of U.S. involvement in Vietnam stretching back in time across four presidential administrations. Why? He wanted to understand how U.S. decision making in Indochina had led to a war that increasingly seemed unwinnable. Having overseen U.S. escalation of the war under John F. Kennedy and Lyndon B. Johnson, McNamara, a committed Cold Warrior, had grown disillusioned.

Daniel Ellsberg, then working at RAND, a nonprofit think tank with ties to the U.S. government, was one of many researchers assigned to work on the secret study, a group called the Vietnam Study Task Force.

The study they produced would become known as the Pentagon Papers.

Ellsberg was especially well-positioned to contribute to the work. Not only had he written a brilliant dissertation about decision making under conditions of uncertainty for his Ph.D. at Harvard, but he had also recently returned from Vietnam, where he spent two years studying counter-insurgency for the State Department.

Subtitled “History of U.S. Decision-making in Vietnam, 1945-68,” the Pentagon study was completed in late 1968. At 7,000 pages and 47 volumes, it was exhaustive. But McNamara had left the Department of Defense, and after all that effort and expense, the top-secret history languished in the safes of a few officials as the war in Vietnam ground on.

At RAND, Daniel Ellsberg was given access to the entire study, and he was one of very few people to read it all.  He was staggered by what he learned. President after president had lied to the American people about the war, from fake rationales for escalating U.S. involvement to false claims that the Communist-led insurgency was being defeated by the American and South Vietnamese military.

A former Marine and Cold War hawk, Ellsberg had begun attending anti-war events and questioning the legality and morality of U.S. actions in Vietnam, including indiscriminate bombing and shelling, the forced relocation of millions of South Vietnamese civilians, and the massive spraying of toxic chemical defoliants.

The American people deserved to know the truth, Ellsberg thought, about what their country was doing in Vietnam and the lies their government had told for decades. The Pentagon Papers contained, he believed, “evidence of a quarter century of aggression, broken treaties, deceptions, stolen elections, lies and murder.” If the public knew the truth, perhaps opinion would turn even more forcefully against the war and bring it to an end.

With the encouragement and help of his former colleague Anthony Russo, Ellsberg began surreptitiously making photocopies of the study in October 1969. He first shared it with antiwar U.S. senators, hoping they would read the Pentagon Papers into the public record and hold hearings to expose the way President Nixon was deceitfully expanding the war just like his predecessors. They turned him down.

Sheehan was the man, and the New York Times the paper, who would meet the moment.

Ellsberg didn’t give Sheehan a copy of the study. He first wanted the New York Times to commit to publishing not only reports on it but also critical excerpts and primary documents. Instead, Ellsberg allowed Sheehan to take notes. But when Ellsberg and his wife Patricia Marx Ellsberg took a trip, Sheehan asked for continued access to the papers, which Ellsberg granted. While Ellsberg was gone, Sheehan and his wife secretly copied the study for the New York Times.

For two months, Times reporters pored over the study in a block of rooms at the New York Hilton while Times leaders debated whether to publish the highly classified government material about an ongoing war. They were worried the paper might be shut down and they might land in jail.

Finally, on June 13, 1971, the New York Times published its first report on the Pentagon Papers. The next day Attorney General John Mitchell asked the Times to refrain from further publication. Citing the public’s right to know, the Times refused. On June 15, the federal district court in Manhattan issued a temporary restraining order until the government’s suit could be heard. This was the first time since the country’s founding that the federal government had tried to stop a newspaper from publishing.

The New York Times could no longer publish the Pentagon Papers. But that didn’t mean other papers couldn’t.

Ellsberg gave a copy to the Washington Post, which published its first report on June 18. Predictably, the Nixon administration sued and received a temporary restraining order.

When the Post could no longer publish, other newspapers picked up the baton, including the Boston Globe, the Christian Science Monitor, the St. Louis Post-Dispatch, and many others. In a clever move, Ellsberg had given copies of the study to a host of newspapers that had expressed frustration with the war in Vietnam. As their presses rolled, the Times and Post cases worked their way to the Supreme Court in record time.

On June 28, two weeks after the Times broke the story, the Court ruled 6-3 against the government’s attempt at prior restraint and in favor of the newspapers’ right to publish the classified Pentagon Papers. It was a historic First Amendment victory for press freedom and the public’s right to know.

Meanwhile, Ellsberg’s situation had taken a dire turn. Just two days before the Supreme Court ruling, he had turned himself in to federal authorities.  The Nixon administration had its hands on the whistleblower who Henry Kissinger, the National Security Adviser, called “the most dangerous man in America.”

Indicted on 12 felony counts, including theft and violation of the Espionage Act, Ellsberg faced up to 115 years in prison. Not content to prosecute him in court, President Nixon ordered the creation of the Special Investigations Unit to dig up dirt on Ellsberg and “try him in the press.”

As Ellsberg and his lawyers prepared for trial, along with Anthony Russo who had also been indicted, Nixon’s “Plumbers”—a nickname indicating the special unit’s mission to plug “leaks”—broke into the office of Ellsberg’s psychiatrist, hoping to find incriminating information. It was a bust, and when the trial judge found out about the illegal break-in, among other criminal acts the government took against Ellsberg, he dismissed the case in May 1973.

But the “Plumbers” didn’t stop their criminality with Ellsberg. Nine months after they broke into Ellsberg’s psychiatrist’s office, they broke into the headquarters of the Democratic National Committee in the Watergate complex to bug the office and photograph papers in an effort to help Nixon get re-elected.

President Nixon’s paranoid attempt to destroy Daniel Ellsberg—the whistleblower who leaked the Pentagon Papers—led to other criminal acts that together brought an end to his presidency. Under threat of certain conviction in an impeachment trial, Nixon resigned in August 1974. With his loss of political power, he had to abandon his pledge to renew bombing in South Vietnam to defend the collapsing South Vietnamese government. The war finally ended on April 30, 1975. 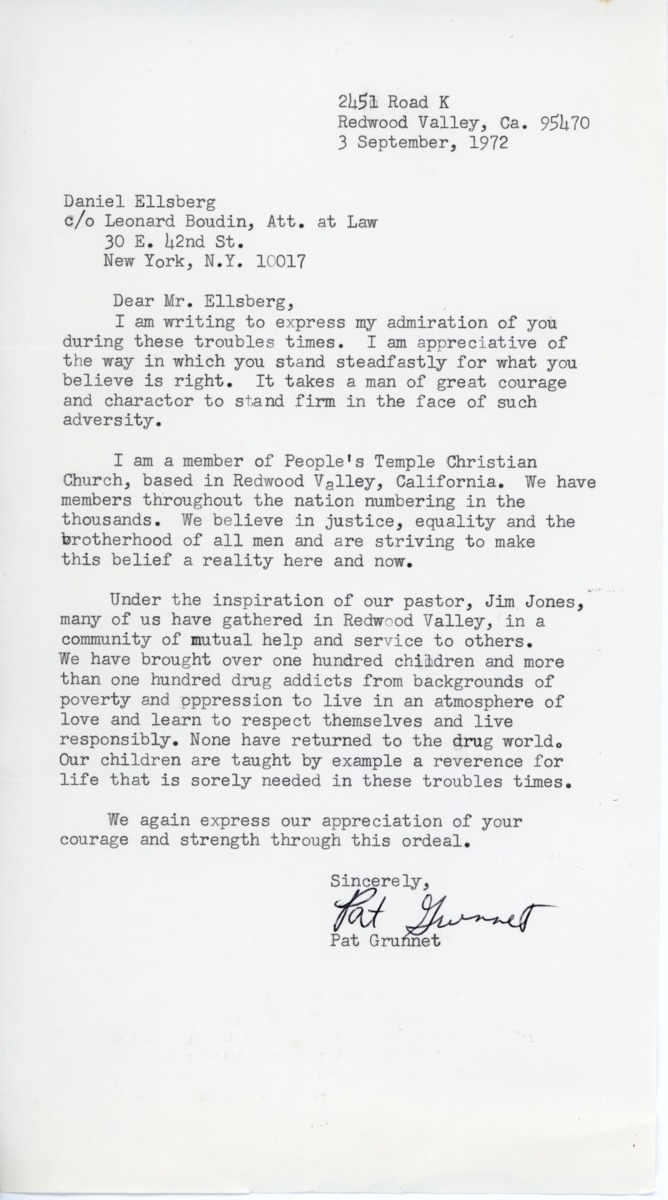 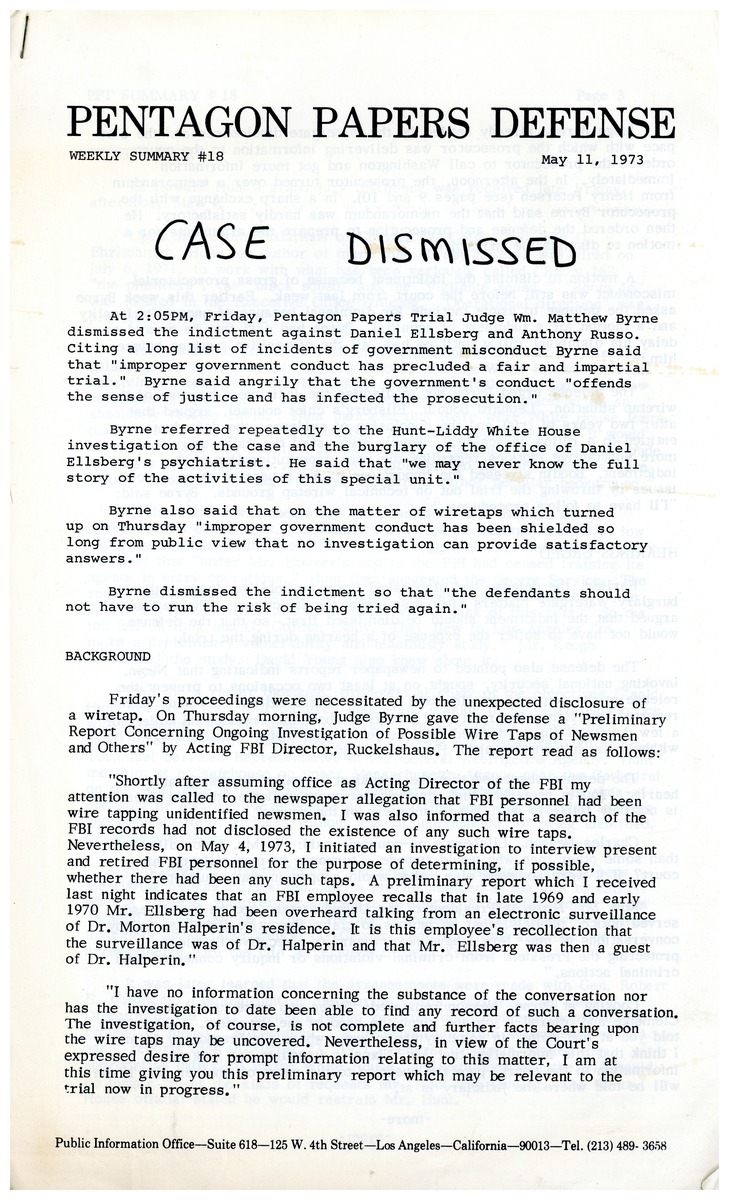 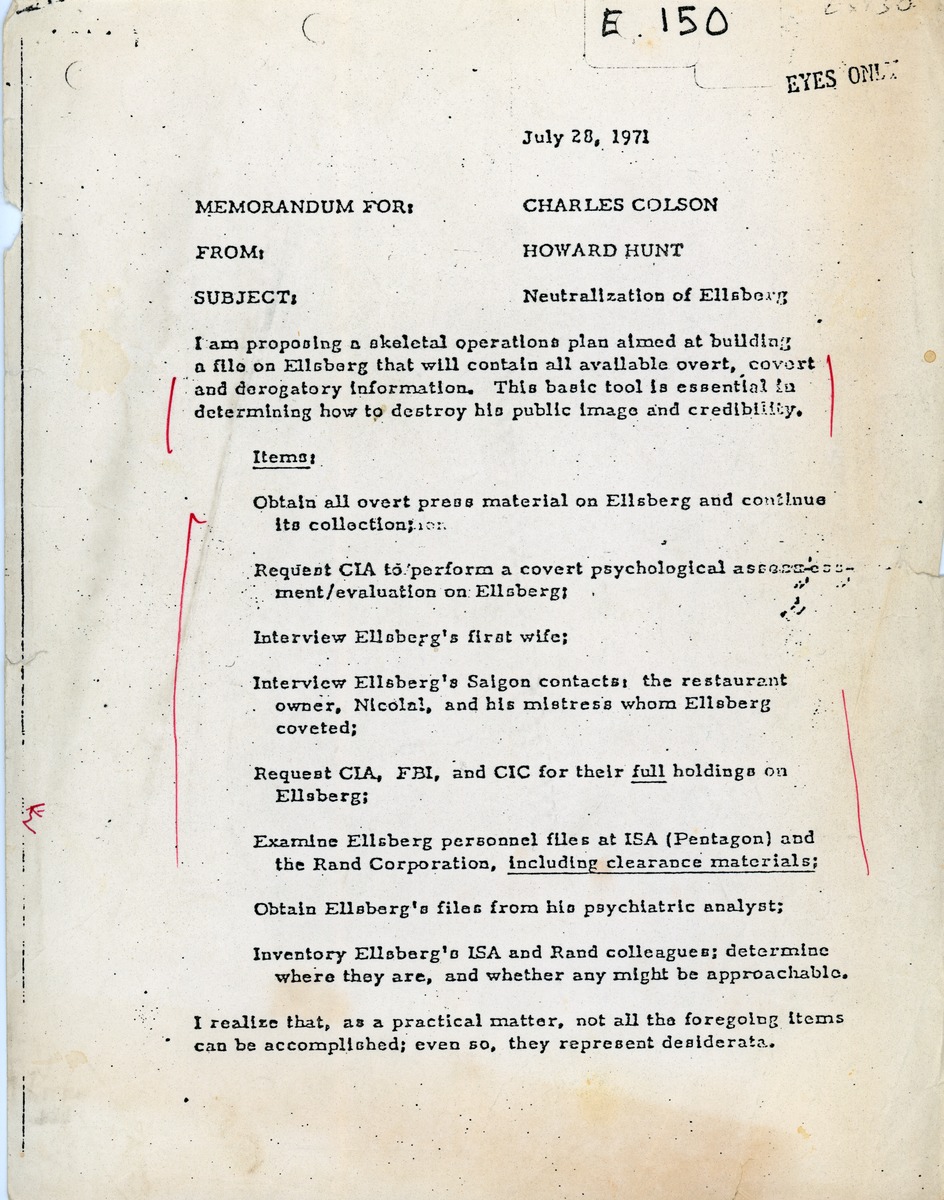 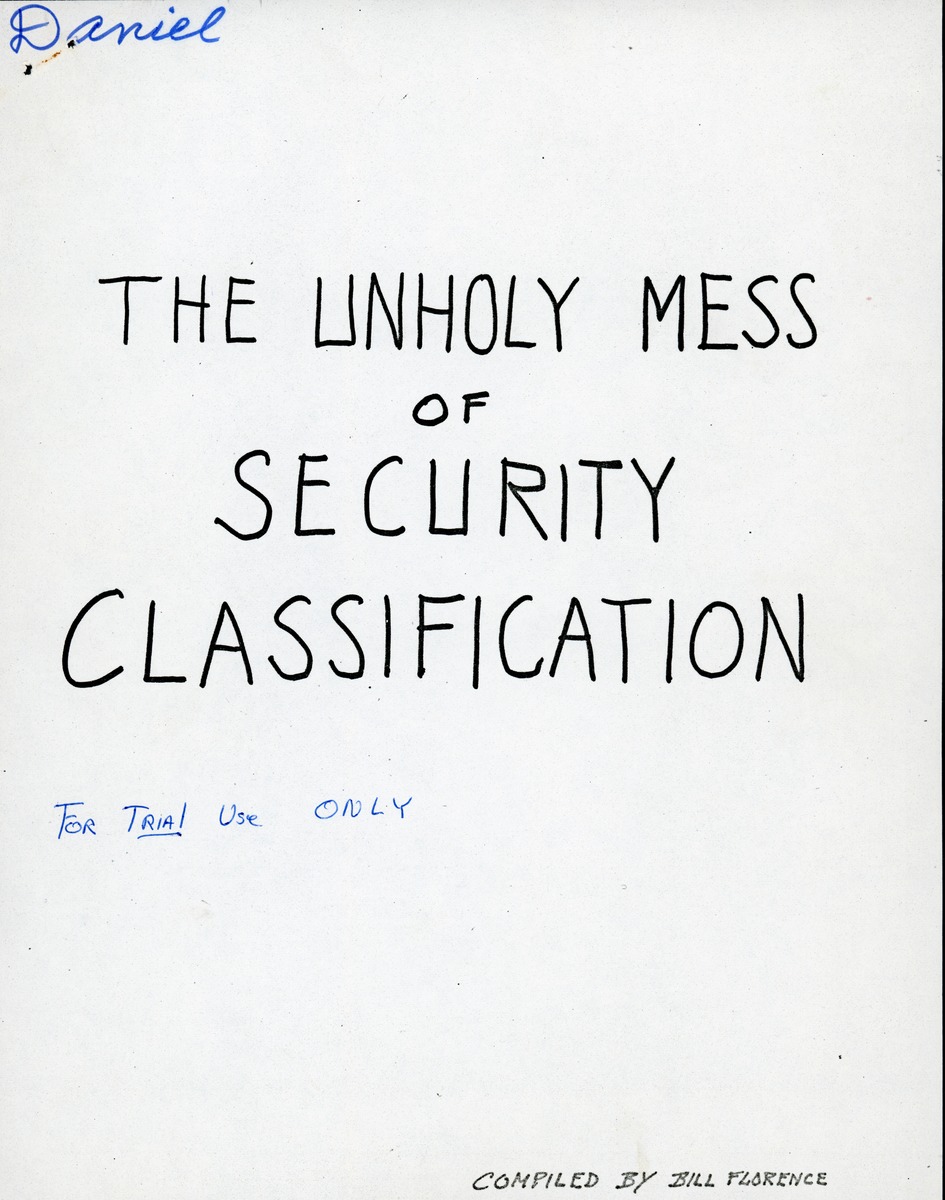 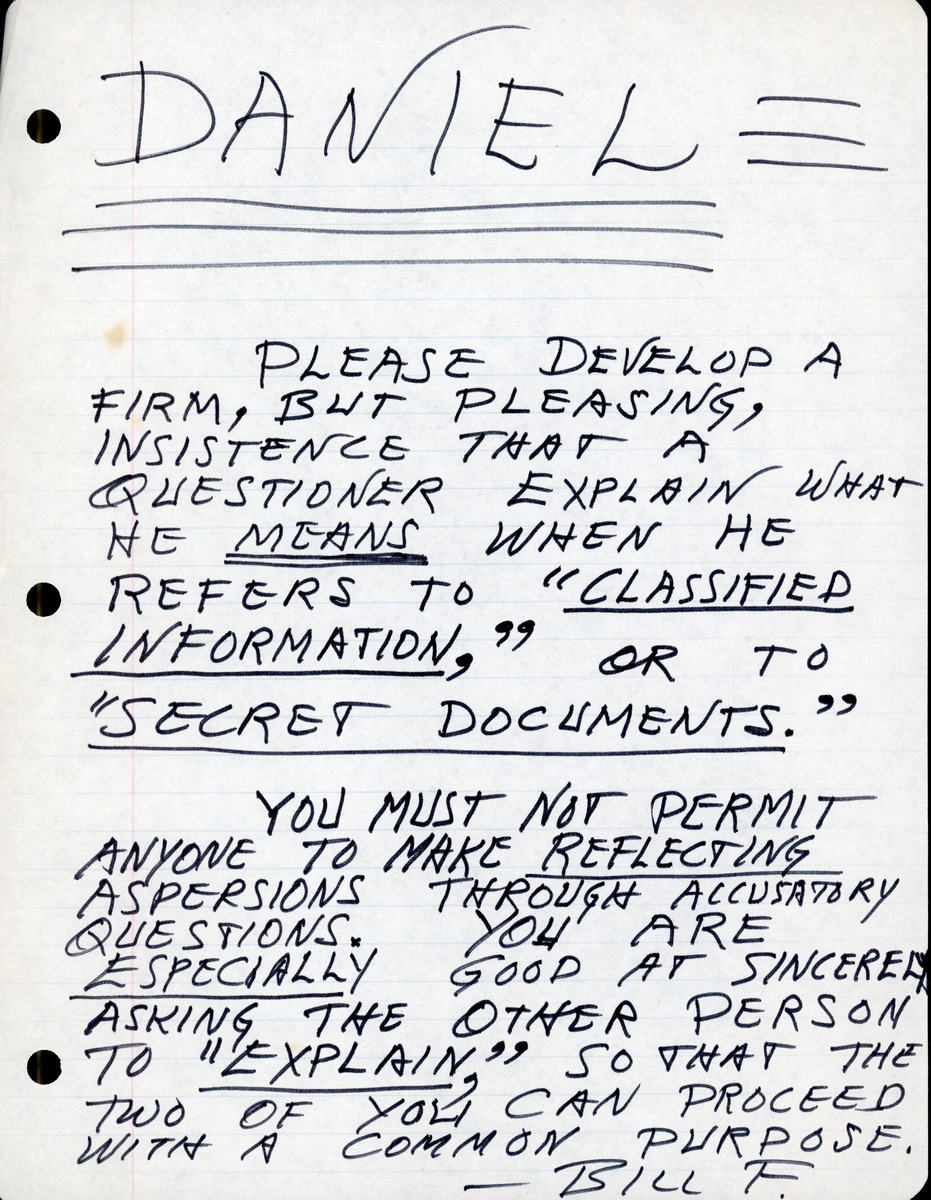 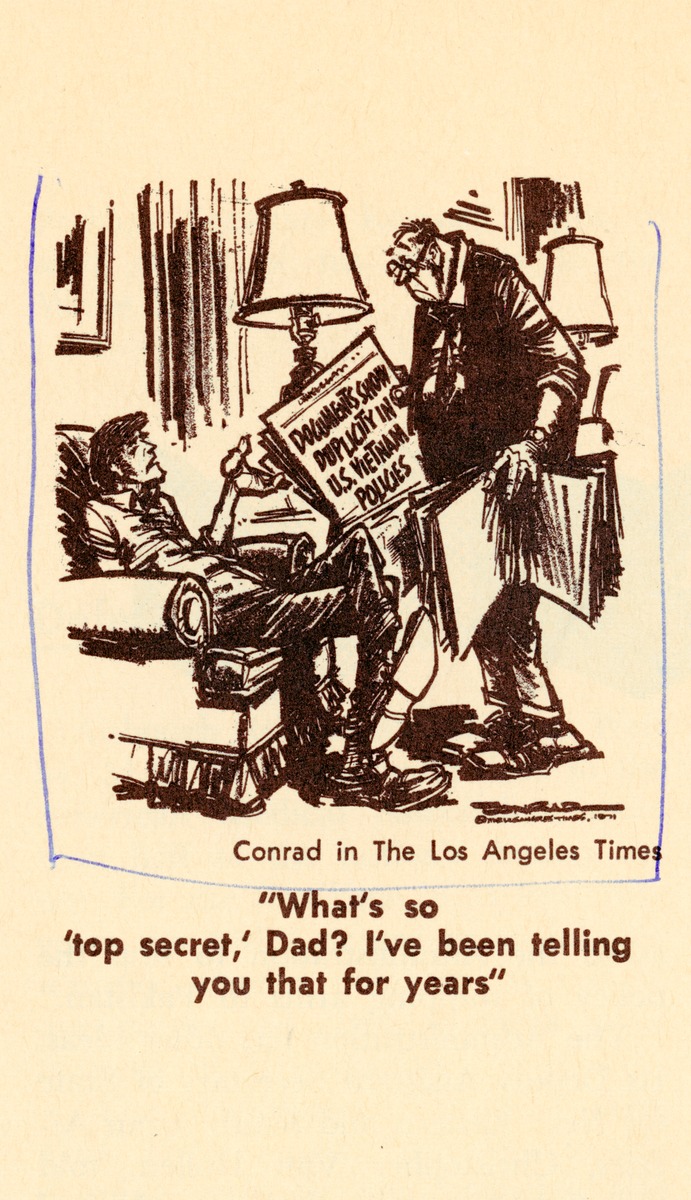 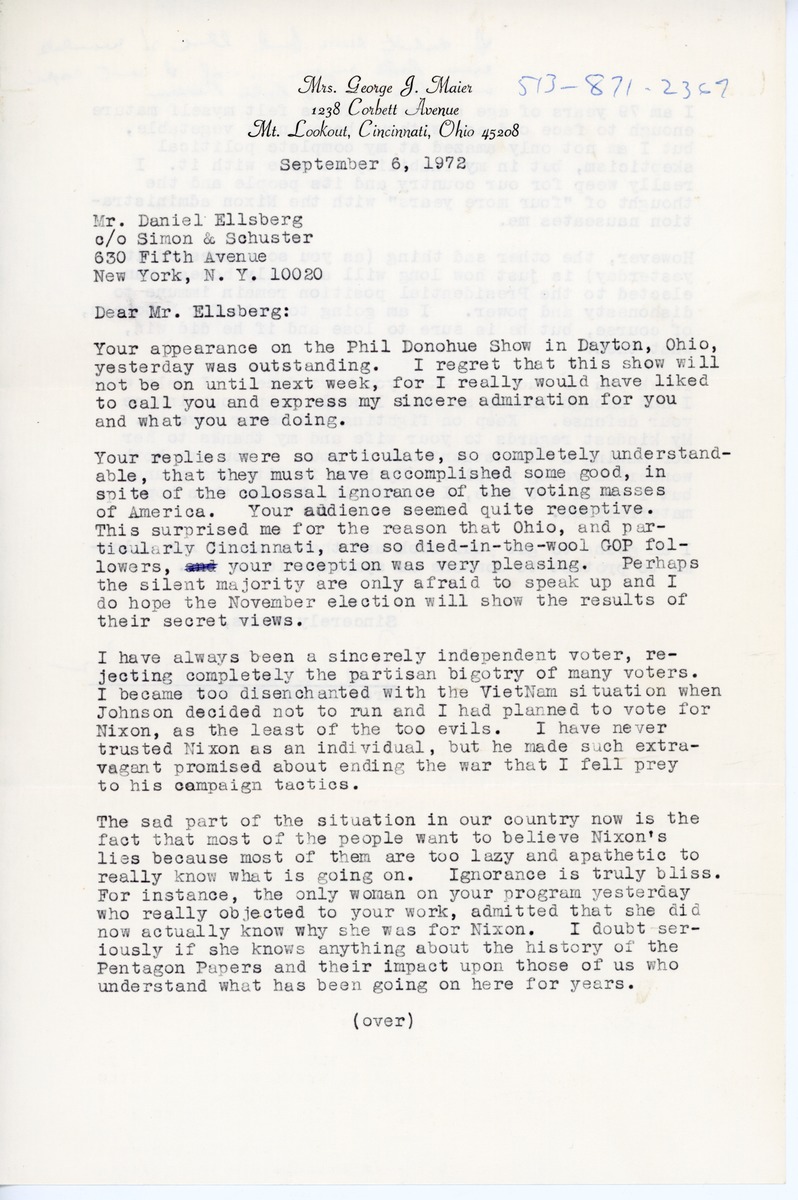 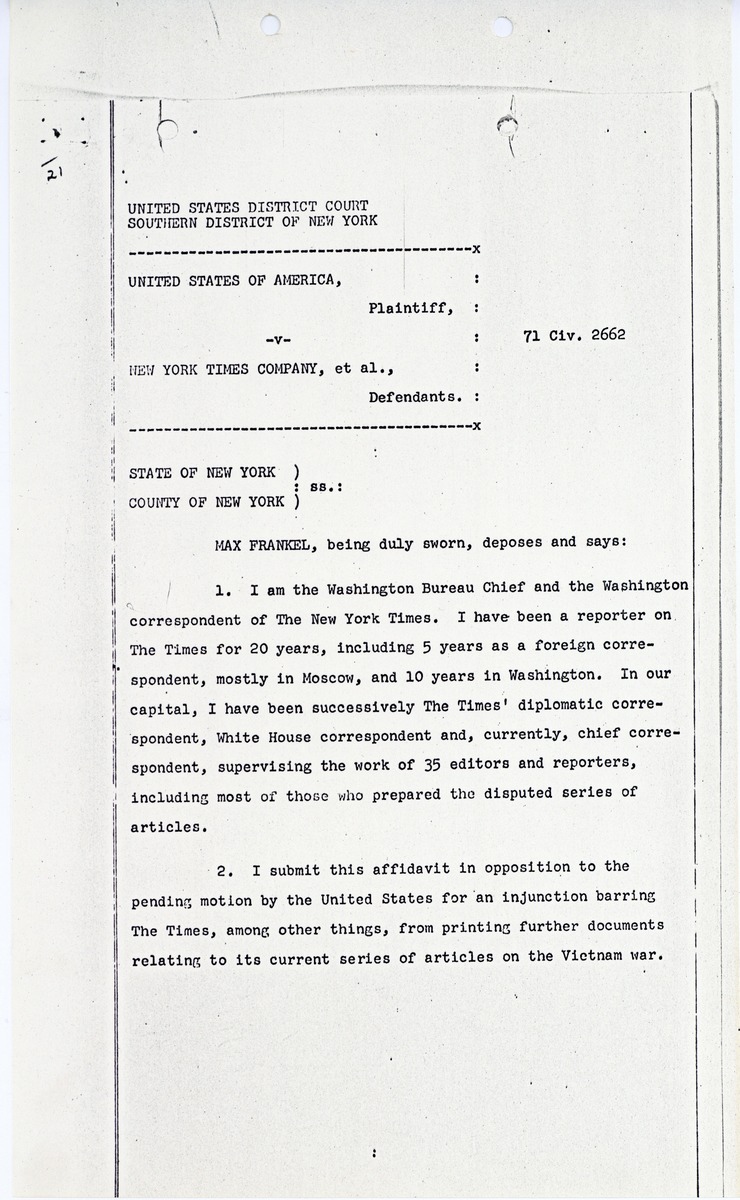 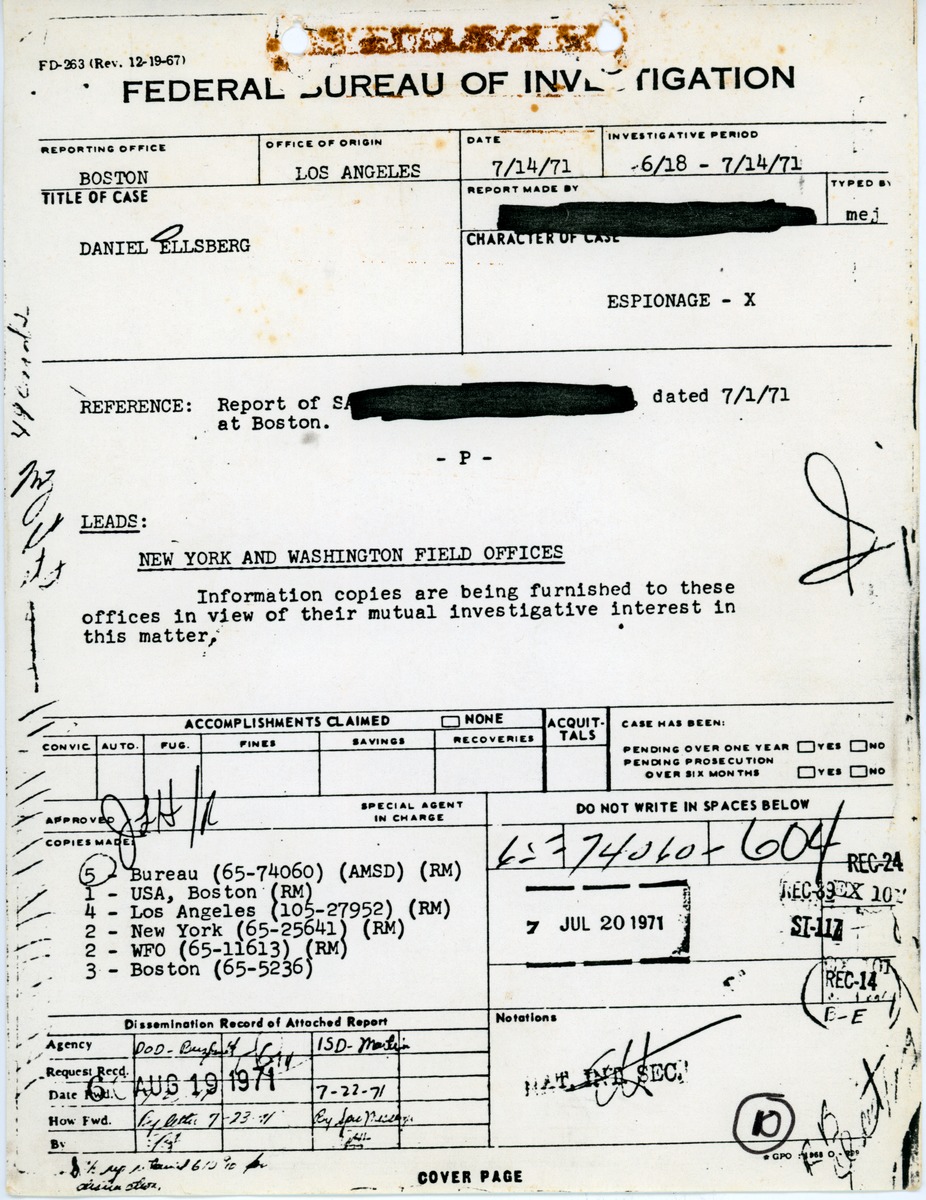