Explore documents related to Ellsberg’s family as well as the legacy of his life as an activist. 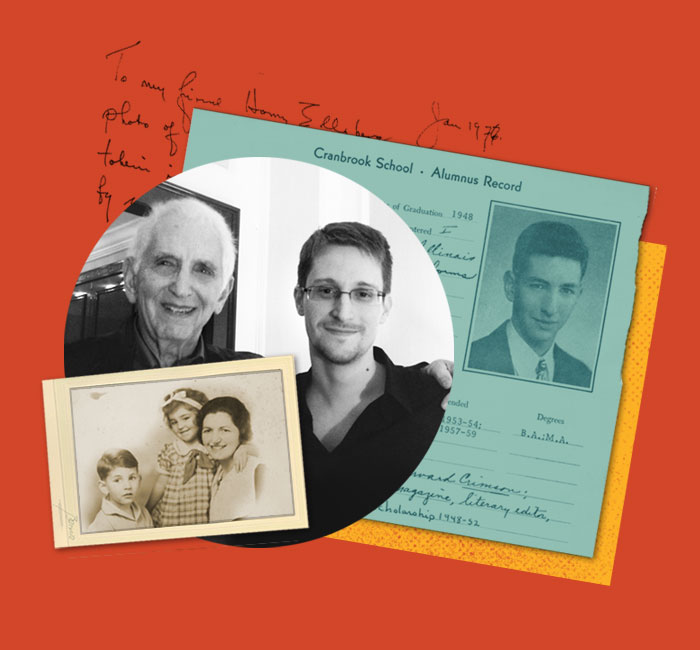 Chicago, 1931. Daniel Ellsberg was born in perhaps the worst year of the Great Depression. His father, a structural engineer, struggled to find work. Family fortunes improved with a move to Detroit when Dan was six and his father helped build the largest industrial plant in the world to manufacture B-24 bombers for World War II, Ford’s Willow Run.

Harry and Adele Ellsberg, Dan’s parents, were nonreligious Jews who became devout Christian Scientists. Dan and his younger sister Gloria were raised in that faith, but never shared their parents’ deep conviction. Because Christian Scientists believe that all illness, disease, or bodily injury is an illusion, Dan was not allowed to take medicine to relieve his severe childhood headaches.

By the time he was five, Dan’s mother was determined that he would become a concert pianist and he was made to practice four or five hours a day. Because he took pride in his growing ability, and wanted to please his mother, Dan rarely rebelled against the intense daily commitment. It continued for ten years. His one great regret was that it left him too little time to read.

With exceptional intellectual gifts, Dan was offered a scholarship to Cranbrook, an elite private prep school in Bloomfield Hills, Michigan where he excelled in a variety of subjects.

In the summer of 1946, when Dan was fifteen, the family embarked on a road trip from Detroit to Denver, home to both of Ellsberg’s parents, for a party in honor of Adele. To get there in time, they would have to drive almost nonstop. On the afternoon of July 4, 1946, after a picnic lunch, Harry Ellsberg got behind the wheel, already exhausted from driving most of the previous night. Dan sat on the floor behind his father while his mother stretched her legs across the back seat. His sister sat beside her father in the front. As they headed toward Des Moines, Iowa, Dan’s father fell asleep at the wheel. They veered into a sidewall over a culvert, sheering off the right side of the car. Dan’s sister and mother were instantly killed. He and his father survived, though Dan went into a coma and suffered a serious broken leg. His relatives insisted that he be treated at a hospital despite his father’s objection.

Ellsberg resists oversimplifying the impact of that tragedy on his life. Yet, he does believe it produced two reactions, at least semi-consciously. One was the feeling that he “owed a life” because he had lived while his sister and mother had not. The other, was a vigilance toward figures of trusted authority, like his father, who might “fall asleep at the wheel” in ways that could lead to catastrophe.

After a few early struggles, he became an outstanding officer. In fact, he was the only first lieutenant in his battalion given command of a rifle company. Even later in life, as a passionate antiwar activist, Ellsberg recalled fond memories of his time in the Marine Corps.

After his military service, Ellsberg went back to Harvard, once again admitted to the Society of Fellows, to work on decision theory, a project that led him to the RAND corporation, where he was a defense analyst from 1959 to 1970, except for the years he worked in the Departments of Defense and State (1964-1967).

In the 1960s, Ellsberg famously changed from “hawk to dove,” from war planner to peace activist, one of the most dramatic conversion stories in U.S. history. There are many explanations for that transition, but part of it was inspired by Ellsberg’s deep reading, not only in the Pentagon Papers (with their damning revelations about U.S. policymaking), but also a wide range of works, including books and essays by Dr. Martin Luther King Jr., Mohandas Gandhi, Barbara Deming, and Henry David Thoreau.

Throughout his life, Ellsberg has frequently quoted a line from Thoreau’s “Civil Disobedience”: “Cast your whole vote, not a strip of paper merely, but your whole influence.”

Ellsberg was also deeply influenced by younger antiwar activists, particularly young men who were willing to serve prison sentences for resisting the draft. After hearing a talk by one of those men, Randy Kehler, Ellsberg was wracked with emotion, wondering what he might do to end the war if he were willing to risk his career and his freedom.

Ellsberg’s views were further affected by his wife, Patricia Marx Ellsberg, who opposed the Vietnam War from the beginning. They married in 1970 and recently celebrated their 50th anniversary. In 1977, they had a child, Michael Ellsberg. Ellsberg’s other children, Robert (b. 1955) and Mary (b. 1958) are from his first marriage to Carol Cummings.

In the years since he released the Pentagon Papers, Ellsberg has been a full-time lecturer, scholar, writer, and activist, one of the nation’s most acute critics of U.S. nuclear and foreign   policy. He has also been a strong supporter of a new generation of whistleblowers, including. Katharine Gun, Chelsea Manning, and Edward Snowden. Ellsberg has even credited young whistleblowers with making greater contributions and sacrifices than his own. In 2013, for example he said, “In my estimation, there has not been in American history a more important leak than Edward Snowden’s release of N[ational] S[ecurity] A[gency] material, and that definitely includes the Pentagon Papers.”

Ellsberg’s tireless advocacy of public resistance to, and knowledge about, major threats to democracy and human existence has been a hallmark of his long life. Those commitments are enshrined in his personal and professional papers, now archived in the Special Collections and University Archives at the University of Massachusetts Libraries.