Collected here are documents related to Ellsberg’s study and activism around nuclear weapons. 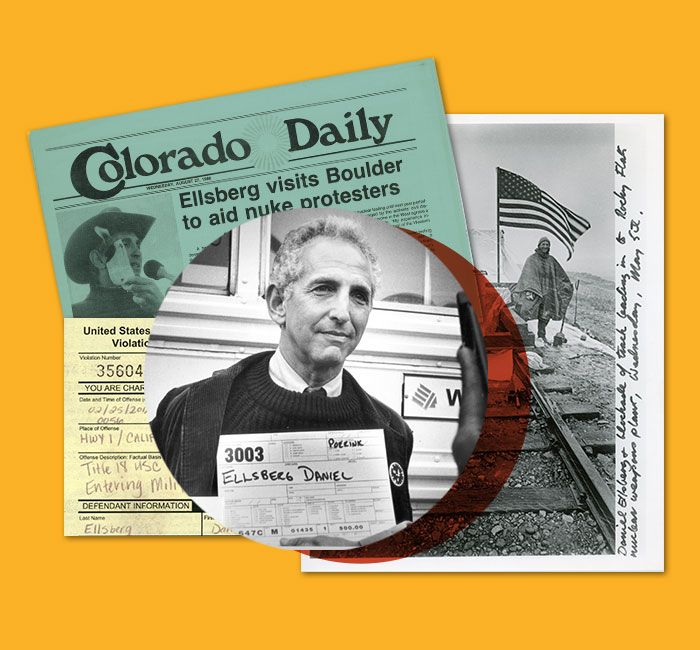 Daniel Ellsberg is best known for turning so passionately against the Vietnam War that he risked his career and personal freedom to help bring it to an end. Yet his commitment to prevent a nuclear apocalypse has been every bit as fervent and has engaged many more years of his long life.

Even at age thirteen, in 1944, Dan had begun thinking about the prospects of nuclear war. He had an exceptional teacher who told the class that scientists believed it possible to create a bomb out of Uranium-235 that would be a thousand times more powerful than any yet invented. The students were asked to write an essay to consider the implications. Dan and his classmates all concluded it would be a disastrous threat to humanity.

A year later, in 1945, Dan celebrated the end of World War II, but the use of atomic weapons against Japan left him with a feeling of dread. That apprehension continued throughout his academic training at Harvard and his three years as a Marine Corps lieutenant. Nonetheless, during this same period Ellsberg became a committed Cold Warrior, convinced that nuclear weapons, however horrible, were necessary to deter Soviet aggression, especially give the widespread fear (later proven false) that the U.S. was falling behind in the nuclear arms race.

In 1959, Ellsberg was hired by the RAND corporation, a think tank funded primarily by the Air Force, to do classified research on national defense. He was attracted to RAND because many of its scholars shared his deep interest in decision making under circumstances of great uncertainty, the subject of his PhD in economics at Harvard. At RAND, Ellsberg worked almost entirely on problems related to nuclear weapons command and control and nuclear war planning.

As he gained expertise and greater access to classified information, Ellsberg was frequently invited to consult with military and civilian leaders. In 1961, he was asked to brief the new presidential administration of John Kennedy on nuclear war policies and plans. He had recently completed an exhaustive study with a shocking finding: Kennedy’s predecessor, President Dwight Eisenhower, had given military commanders the authority to use nuclear weapons in the event communication with Washington were cut off or the president incapacitated. Like most Americans, Ellsberg had believed only the president could order a nuclear strike. It was also news to Kennedy who decided to continue the policy.

Just a few months later, Ellsberg was asked to draft some questions for JFK to submit to the Joint Chiefs of Staff. One was basic: if the United States carried out its plan for general nuclear war against the Soviet Union and China, how many people would die? The answer came back: 600 million. Terrifying as that number was—a hundred Holocausts—it was too low. There was then no understanding of the now widely accepted theory of “nuclear winter.” A nuclear war on the scale U.S. leaders were prepared to wage would almost certainly loft enough smoke and soot into the stratosphere to block the sun for a decade or more, causing a global famine that would kill nearly every human being on earth, if not all.

With this information, Ellsberg became preoccupied with providing leaders more flexible nuclear plans that would not automatically lead to global annihilation. Yet, as with his change of mind over the Vietnam War, Ellsberg’s view of nuclear policy underwent radical transformation in the late 1960s and 1970s. He came to believe that “nuclear deterrence” could not be depended upon to prevent a war. There were simply too many risks that a war might be started by an unstable leader, a rogue commander, a false alarm, an accident, a technical malfunction, a miscommunication. Nuclear war, Ellsberg concluded, is “a catastrophe waiting to happen.”

In the decades after leaking the Pentagon Papers, Ellsberg has given hundreds, if not thousands, of speeches on the danger of nuclear weapons and has participated in countless anti-nuclear demonstrations. He has been arrested for acts of civil disobedience dozens of times in campaigns against the MX missile, the neutron bomb, the deployment of a new generation of missiles in Europe, the nuclear production plant in Rocky Flats, Colorado, Lawrence Livermore National Laboratory, and many other weapons and institutions that perpetuate the ongoing nuclear threat to humanity. 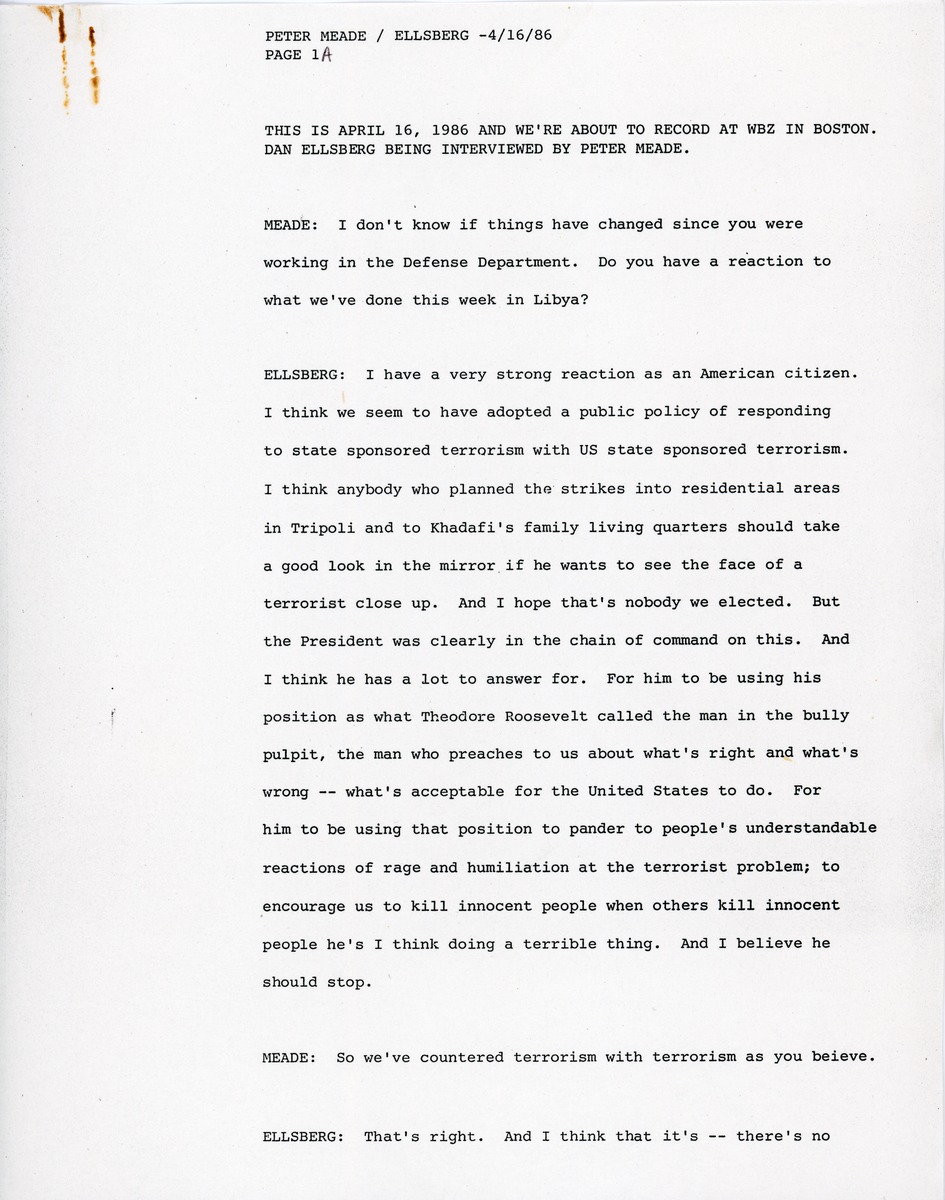 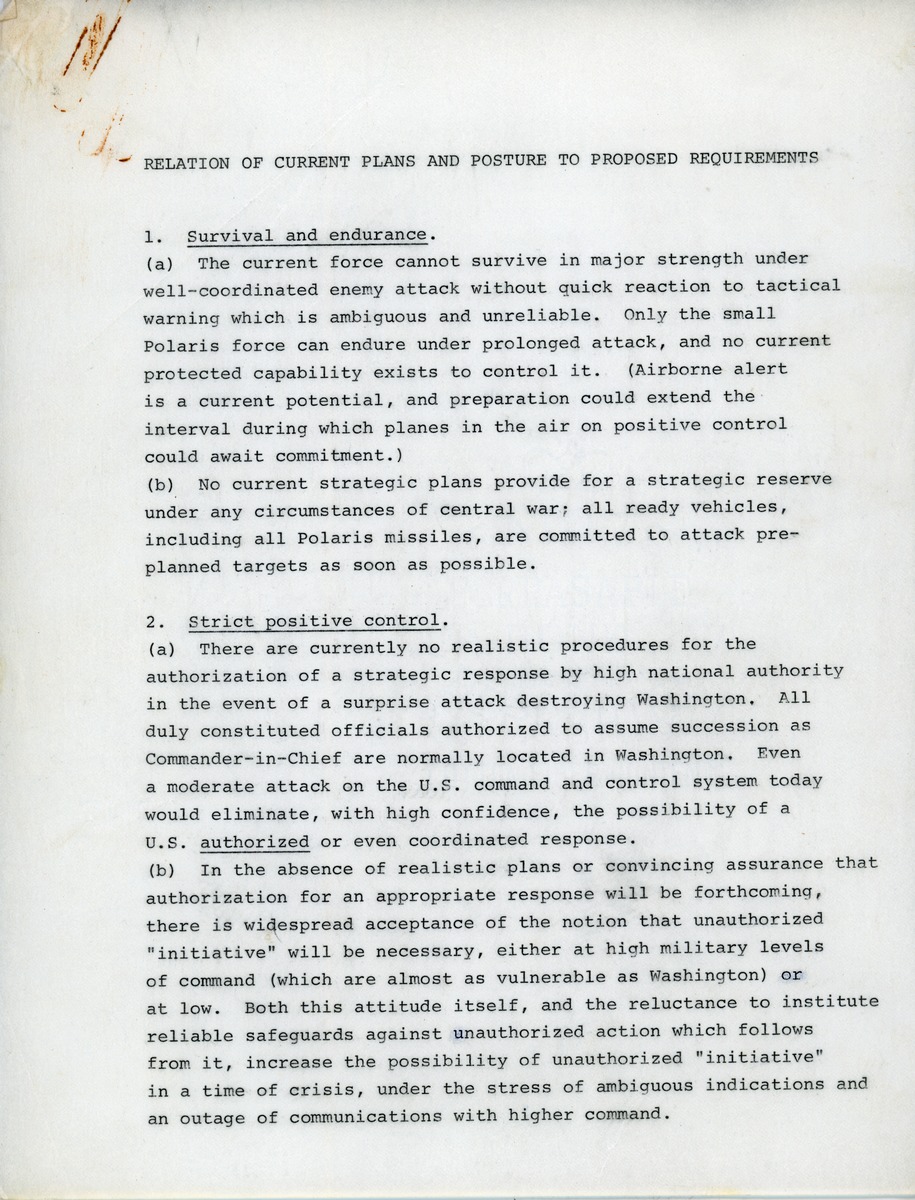 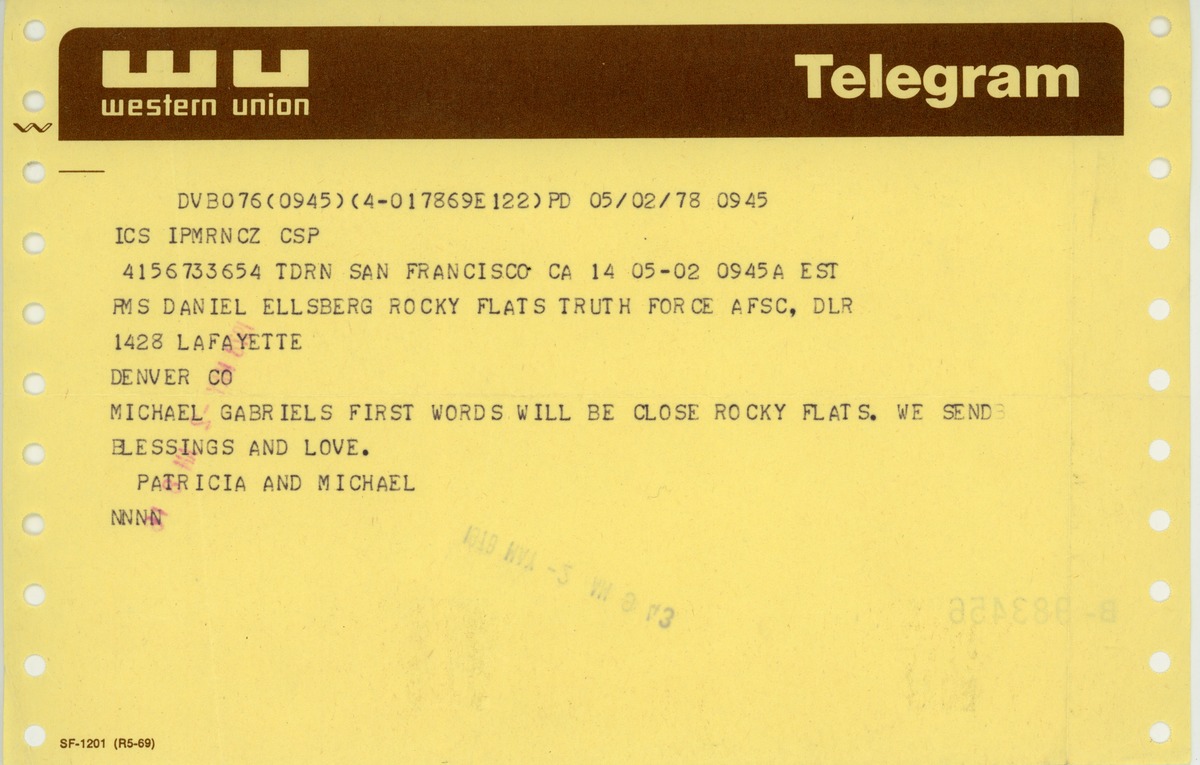 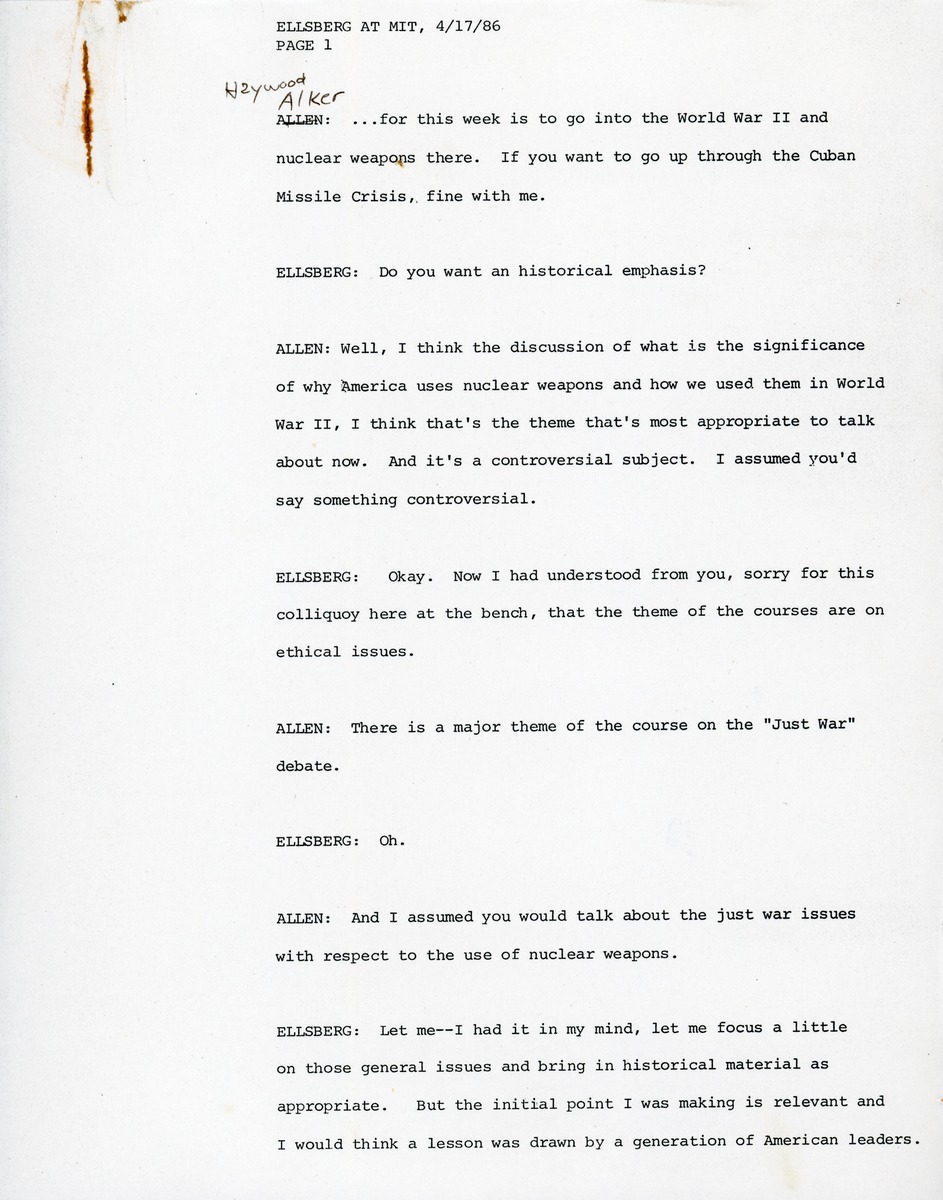 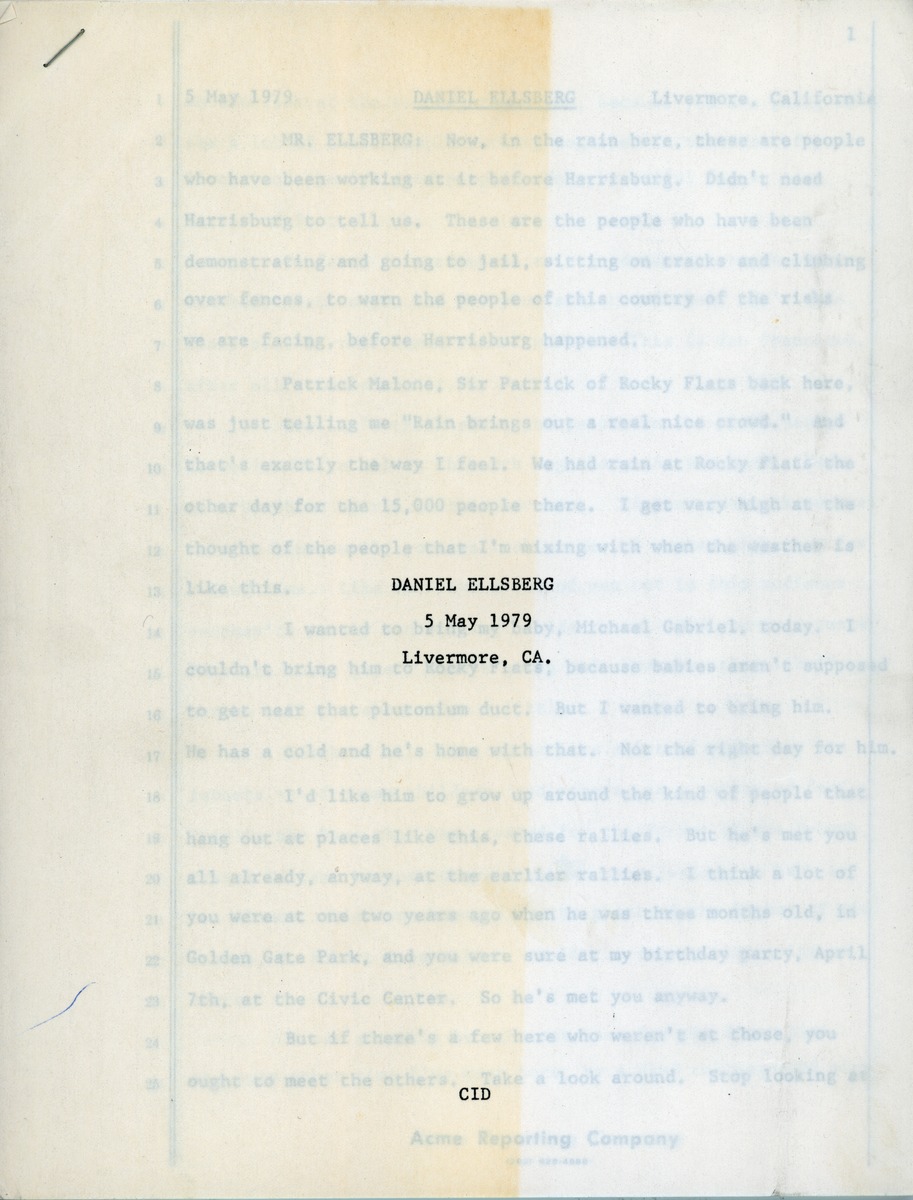