UMass Amherst was born in 1863 as a land-grant agricultural college set on 310 rural acres. It offered its first classes in 1867 with four faculty members, four wooden buildings, 56 students and a curriculum combining modern farming, science, technical courses, and liberal arts.

In 1892 the first female student enrolled and graduate degrees were authorized. Over time, the curriculum, facilities, and student body outgrew the institution’s original mission. In 1931, to reflect its broadened curriculum, “Mass Aggie” had become Massachusetts State College. “Mass State” in turn became the University of Massachusetts in 1947.

Immediately after World War II, the university experienced rapid growth in facilities, programs, and enrollment, with 4000 students in 1954. By 1964, with Baby Boomers coming of age, undergraduate enrollment jumped to 10,500. The turbulent political environment of the time brought a sit-in to the newly constructed Whitmore Administration Building. By the end of the decade, the completion of Southwest Residential Complex and the Alumni Stadium and the establishment of many new academic departments gave the campus much of its modern look.

In the 1970s continued growth gave rise to a shuttle-bus service on campus as well as several important architectural additions: the Murray D. Lincoln Campus Center, with a hotel, office space, fine-dining restaurant, campus store, and passageway to a multi-level parking garage; the W. E. B. Du Bois Library, the “tallest library in the world” upon its completion in 1973; and the Fine Arts Center, with performance space for world-class music, dance, and theater.

By 1990 the campus, now called the University of Massachusetts Amherst and the flagship of the state’s five-campus University system, was emerging as a major research facility with the construction of the Lederle Graduate Research Center and the Conte National Polymer Research Center. On the athletic front, UMass Basketball in 1996 became Atlantic 10 Conference champs and went to the NCAA Final Four. The new William D. Mullins Center, a multi-purpose sports and convocation facility, and the Paul Robsham Visitors Center bustled with activity, welcoming thousands of visitors to the campus each year. In 1999 the founding of Commonwealth College (subsequently renamed Commonwealth Honors College) began attracting highly academically gifted students in unprecedented numbers. 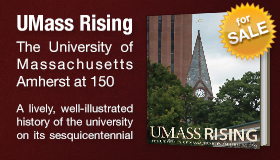 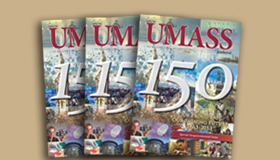 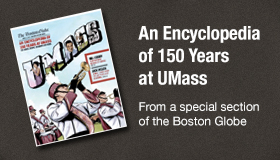