Efosa Guobadia ’07 is a physiotherapist, a world citizen, and a man more enterprising than any five mortals have any right to be. He brings a missionary zeal to his work—practically, spiritually, and geographically.

As Guobadia sees it, physical therapy keeps us moving as well as we can at any given point in our lives. Healthier movement makes for healthier people who can better engage with the world in every facet of their lives. And healthy, engaged people make for a better world.

Guobadia is a cofounder and the president and CEO of the nonprofit organization Move Together. It helps bring quality rehab medicine to what Guobadia hopes will someday be “a clinic in every community and a sense of community in every clinic,” both at home and in needy settings overseas. In only its second calendar year, Move Together has already made an international mark, thanks in part to Guobadia’s exceptional ability in inspiring followers and drawing financial support from sponsorships, individual donations, t-shirt sales, and whatever else it takes.

Guobadia was born in Nigeria. His family immigrated to the United States when he was an infant. He grew up in Brooklyn, New York, and Baldwin, on Long Island. His well-educated, hardworking, goal-oriented parents—his father an economist, his mother a nurse—made sure he followed their examples.

In middle and high school Guobadia excelled in football, wrestling, and lacrosse. The latter brought him to UMass Amherst, with which he fell in love on a recruiting trip and to which he has remained devoted. In bonding with his teammates and classmates, he found a diverse, dynamic community that spawned what have turned out to be many enduring friendships.

Partially inspired by his older sister’s example, Guobadia majored in what was then called exercise science but was soon renamed kinesiology. It was a natural choice. Family lore has it that “stethoscope” was the first word that Guobadia, fascinated by his mother’s nursing gear, burbled as a baby. “The kinesiology department prepared me well for my graduate studies,” he says. “I loved the variety of settings and challenges the profession offered. Between that and lacrosse—I considered Garber Field my true campus home—UMass really helped me develop the foundation for many of my professional actions.”

After receiving his doctorate of physical therapy at the University of Scranton in 2010, Guobadia took a job with ATI Physical Therapy, a company with over 400 physical therapy outpatient clinics in 12 states. There he collaborated with colleagues in creating a mission trip and service program to send health clinicians to remote, underserved corners of the world. It was the first of many such trips he has led.

On one trip, in 2015, on a boat headed for a Peruvian service site, Guobadia began wondering whether physical therapy students, staff, and clinicians around the country and around the world might somehow be enabled to join in an annual day of service. The first PT Day of Service was organized that year; people from 28 countries and all 50 U.S. states participated. By 2017, some 10,000 volunteers from 55 countries had taken part.

Move Together’s four components have distinctive objectives. Its Clinic Development Program builds new clinics, enhances existing ones, and provides education and access to rehab resources in underserved communities. It has thus far been responsible for creating two clinics in Guatemala, each in a single day, thanks to prefab parts and enthusiastic help from student volunteers, including some from UMass Amherst. One of them, Alec Shostek ’18, calls the experience “deeply inspiring. Efosa is a powerful leader and speaker, able to unite people from all sorts of backgrounds. He’s a great person with a great heart.” 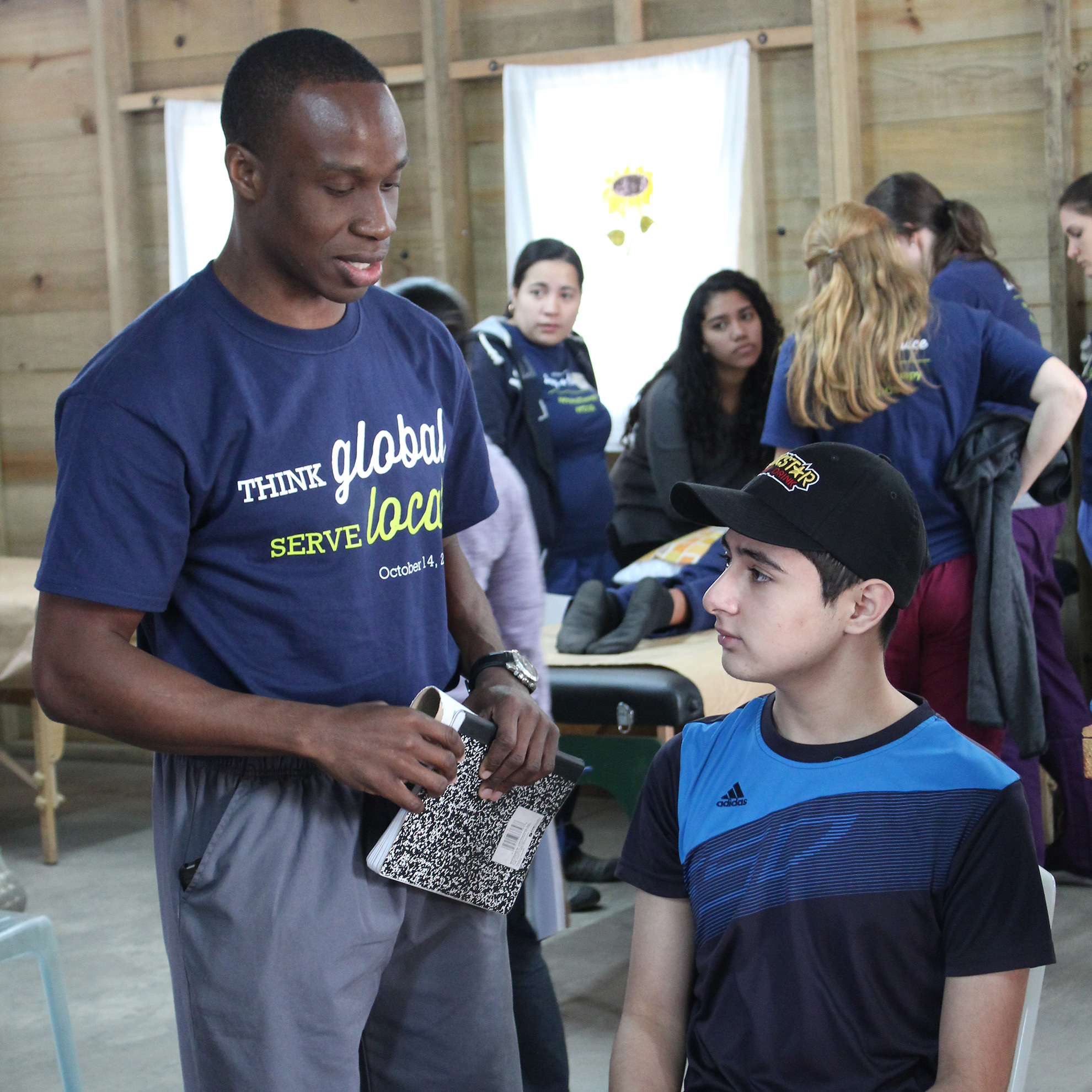 Efosa Guobadia at a Guatemalan clinic.

Photo by
Move Together

In a related effort, Move Together enhances partner clinics by providing education and adding equipment and resources to promote cleanliness and fight the spread of disease. It has also created a grant program supporting the development of and innovations in U.S. pro bono clinics.

Finally, PT Day of Service, now integrated within Move Together, unites physiotherapy professionals of all kinds in service, nationally and internationally. It is a perfect reflection of Guobadia’s social conscience and managerial acumen.

At the end of November, Guobadia will set off on an eight-month trip that will take him through 20 countries in Latin America, Africa, Europe, Asia, and Oceania. He will focus on service work and international connections and relationship-building and hopes to gain a truly universal perspective on physical therapy, health, and service and what might make them more effective.

Guobadia credits his successes to what he calls servant leadership. “Leadership is about service,” he explains. “From what I’ve seen, you get the best results when you, the manager, serve alongside everyone else and empower and actually love your team members. That brings out the best in them and leads to the greatest achievements and the greatest sense of fulfillment. The whole effort is intensively bidirectional and collaborative.” All true enough, of course—if, as in his case, the manager shows exceptional passion and focus.