Found in every wind energy graduate education setting worldwide, the second edition (2009) is a substantially expanded and updated version of the first one (2001). 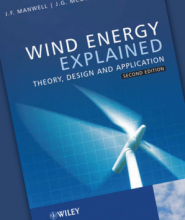 Wind Energy Explained is a great introduction to the field of wind energy engineering. The material for this textbook comes from course notes from Wind Energy Engineering, a course which has been taught at the University of Massachusetts since the mid 1970s, and teaches the fundamentals of energy conversion from wind energy to electricity and its use by society. The topics covered include meteorology, resource assessment, aerodynamics, electrical, mechanical, and design considerations, turbine control systems, siting issues, and economic and environmental considerations. Though it is geared for college seniors, first-year graduate students, and professionals in related fields, plenty of introductory information is given, making the material accessible to anyone with math, physics, or engineering backgrounds.

From a 2006 review of the first edition of Wind Energy Explained in The Journal of Wind Engineering, 2006:

“This third update of the first edition shows conclusively that this is the university text book for modern wind power engineering” and it is “the best textbook for training of the graduate engineer in wind power applications.”

Download a .zip file containing the data files required for some of the assignment problems

As of August, 2005, there have been three printings of Wind Energy Explained.  There is no indication in the initial printing that it is the initial, or any other, printing. The second printing says Reprinted September 2002 on the copyright page right before All Rights Reserved & The third printing says Reprinted with Corrections August 2003.  Two lists of errata have been developed.  The first applies to the 1st and 2nd printings.  The second applies to the 3rd printing.  The first set of errata was developed after the first printing and was augmented as new errors were noticed.  All the errors that were noted before the third printing were corrected in that printing, except for those which were introduced by the printing process and could not be corrected.  Some additional errors have been discovered since the third printing. Those errors are corrected in the second set of errata.  They have also been added to the first set of errata.

The second edition of Wind Energy Explained is currently printing and will soon be available. More information can be viewed from the publisher's page.

Download a .zip file containing the data files required for some of the assignment problems

In conjunction with the development of the Wind Energy Engineering course notes, a number of computer codes have been assembled and made accessible from a simple graphical user interface. Learn more here.