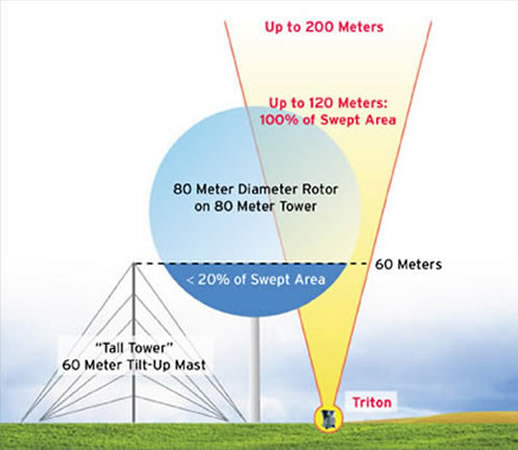 As the wind energy industry expands and larger-scale projects are developed, wind turbines are becoming larger in rotor diameter as well as in hub height. Accordingly it is becoming difficult to accurately assess the wind resource with standard cup anemometers mounted on standard height (60m) meteorological (met) towers. For this reason, attention is being directed to other methods of wind speed measurement, such as SODAR (Sonic Detection and Ranging). Since the SODAR can measure wind speed as a function of height and is relatively easy to transport and assemble, the technology is very appealing.

The SODAR is able to measure wind speed by taking advantage of the Doppler shift phenomenon, which refers to the apparent change in frequency of an acoustic signal that is perceived by a fixed observer relative to the moving source. High frequency (typically 4500 Hz) acoustic signals are emitted from the SODAR in three directions, one beam in the vertical and two orthogonal beams tilted approximately 17 degrees from vertical. The acoustic waves are reflected off of moving, turbulent layers of air in the atmosphere thereby causing a portion of the signal to return to the SODAR. The reflected signals are then measured by the SODAR and an FFT (Fast Fourier Transform) is performed to analyze the frequency content of the signal. The Doppler-shifted frequency is calculated at a range of heights (up to 200m) in each direction and the vector wind speed can then be calculated.

The University of Massachusetts Wind Energy Center currently owns two Model VT-1 ART SODARs. These units are monostatic phased-array Doppler SODARs developed by Atmospheric Research & Technology, LLC (ART). The SODARs have been placed at many locations around Massachusetts over the last few years.

In addition, the Wind Energy Center purchased a Second Wind Triton in 2008. Like the ART devices, the Triton has been deployed in a number of locations and tested successfully against met towers.