In the 1980s the main focus of the Renewable Energy Research Laboratory (RERL), now named the Wind Energy Center, turned to issues related to wind-diesel system integration. This change was indirectly due to the discontinuation of the tax structure which had provided a market for the early California wind farms. Without this tax incentive it was difficult for wind energy to compete with coal-generated grid power, so the fledgling wind manufacturing industry looked toward markets in which wind energy could be competitive. This turned out to be areas with diesel-fired power plants, such as islands or remote villages.

The program began in 1987 with the design and construction of a wind-diesel simulator, as a first step in developing a hybrid energy simulation model. The hardware simulator consisted of a computer-controlled DC motor driving a typical wind induction generator. The DC motor was fed inputs simulating wind speed via computer. A bank of electrical heating elements simulated load with high variability. Storage was simulated with a battery bank feeding a rotary converter. This arrangement allowed the simulation of system performance under a wide variety of inputs (wind speed, load, storage capacity, fuel) on an instantaneous basis. 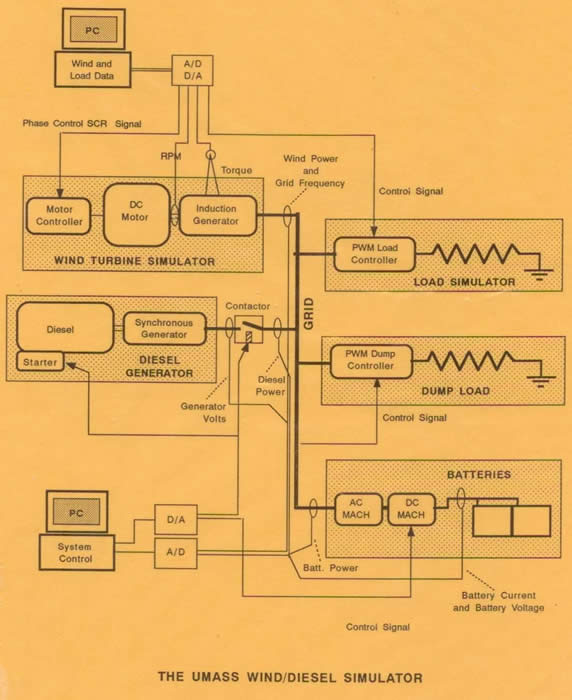 This simulator provided the basis for the creation and validation of the Hybrid I, and later Hybrid II computer models. Ultimately the performance of multiple wind turbines, multiple diesel generators, battery bank storage, photovoltaic systems, and electrical load could be modeled simultaneously running on both AC and DC busses. Later program enhancements included modeling of behavior when connected to a standard utility grid. This work was funded over a period of five years through the National Renewable Energy Laboratory (NREL) and provided the basis for numerous masters and doctoral theses over the next 20 years.