In many ways, the WF-1 has heavily influenced the entire modern global wind industry: the first generation of American wind engineers were trained by working on its design and operation, and many of the WF-1’s innovations appear in modern turbines. Today’s “mature” wind turbine design bears what was once new on the WF-1: three blades, near-optimal blade-shape, fiberglass blades, pitch regulation, variable speed operation, and computer control.

The WF-1 could be considered the first “modern” US wind turbine, and in many ways it was more advanced than many later models of the late 1970s, 1980s and even 1990s.

By Robert Righter’s (1996) reckoning, the WF-1 marked the beginning of the modern wind-electric era. Earlier wind-electric generators included small generators such as the Jacobs and the Windcharger, as well as larger models (some purely experimental), such as the Brush turbine, the Russian Balaclava (1930s), the Smith-Putnam (1930s), the Danish Gedser (1950s), and the German Huetter turbines (1960s).

The WF-1 in the UMass Wind Research Program

Shortly after the UMass renewable energy program was founded by Prof. William Heronemus in the early 1970s, the WF-1 wind turbine became the heart of the program. The turbine took its name (Wind Furnace) from its original purpose: energy in the winds would be converted to heat for use in space heating of residential buildings.

The WF-1 was paired up with a building known as the Solar Habitat, located on the UMass Amherst campus. This facility was designed to demonstrate that a number of energy efficient building practices, such as solar hot water heaters, could be incorporated into a popular housing style, the ranch house. The wind furnace successfully demonstrated that wind heating could work, but the concept of a “wind furnace” never caught on. Relative to grid quality electricity, space heating was not economical, and subsequent technological advances and regulatory changes favored the direct production of electricity from wind power.

The wind furnace project was initiated by Prof. William Heronemus, who was then in the Civil Engineering Department at UMass Amherst. Prof. Heronemus was also a naval architect and a captain in the US Navy, with extensive experience on nuclear submarines. He was the first person to propose offshore wind projects for New England; his concepts called for floating support structures, relying heavily on his Navy experience, rather than the bottom mounted turbines currently in use. He is also thought to be the first to propose a “hydrogen economy,” based on hydrogen produced from the electrolysis of sea water, using wind turbines as the source of the electricity. In sum, Prof. Heronemus is widely considered to be the father of modern American wind energy. The concepts he proposed were often considered visionary at the time, but he lived to see many become reality. He died in 2002.

Other UMass faculty involved with the wind furnace project included the following:

A great number of students were also involved in the design, construction or operation of the WF-1. Most of them either earned their MS or PhD degrees in connection with their work on the project. Some of those students include:

Many of the students who worked on WF-1 went on to work for major wind turbine manufacturers in the US when the industry was just beginning. At least 3 students who worked on the WF-1 worked for US Windpower very early on: Louis Manfredi, Forrest (Woody) Stoddard, and Dan Handman. Others joined Kennetech Windpower, Zond, Fayette, Enron Wind, and Second Wind. Two of the original students (Sandy Butterfield and Jim Sexton) were principals of ESI, a one time major manufacturer of wind turbines. Many veterans of the WF-1 project still work in the wind industry, such as at GE Wind, the DOE’s National Renewable Energy Laboratory, Northern Power Systems (in VT), and at Second Wind (in Somerville, MA). 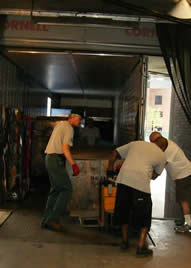 Crates containing the WF-1 were moved from a storage area onto a truck for shipment to the Smithsonian Institution.

The turbine was dismantled in the first week of October 2004. It was later prepared for transportation and the crates were trucked to the Smithsonian Institution's storage facility in May, 2010.